My day has not stopped since waking up. I hope yours is more at ease. Take the time to go and get some sun if it’s nice by you. It’s nice by me and I can’t wait to enjoy that delightful breeze.

Impact Wrestling Star Suspended – Pro Wrestling NOAH has suspended Impact Wrestling star Bram over a silly Instagram post he posted late yesterday. Bram had been tagging with Robbie E in the Global Tag League tournament. Bram has apologized and has been replaced by Kazma Sakamoto. This is a bad time for both Bram’s suspension and the partnership. Impact Wrestling and NOAH had just started a new partnership and it’s unknown how this will affect it, if at all, moving forward. 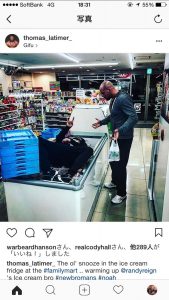 WWE Releases NXT Talents – The WWE has released pro wrestlers Chris Atkins, Josh Bredl and backstage interviewer Andrea DiMarco. The rumor I’m hearing for Atkins and Bredl had to do with them not developing enough in the ring since signing and DiMarco was simply deemed expendable. I’m hearing we could get a massive round of cuts coming in a few weeks. Stay tuned.

Long Time Employee Involved in Incident – Bob Ryder, one of the founding crewmen brought in by Jeff Jarrett in 2002, was involved in a verbal confrontation with Karen Jarrett this past weekend. The incident was reportedly around travel issues, which is Ryder’s job in the company. Jeff Jarrett intervened and asked Ryder to leave the tapings. Ryder returned to Nashville and it seems cooler heads had prevailed. I’m told at no point was Ryder going to be fired, but was merely sent home because Jeff wanted to defuse the situation, and Ryder isn’t needed at the tapings themselves, while Karen was needed for several segments. I’m also told that people believe the issue to be about more than misbooked rooms or something petty.

Impact-India Update – An Impact fan who was present for this past weekends tapings, recently claimed to have heard that the India tour will be happening in June now. As they plan on filming four weeks of taping there, they’d have to film between June 1st, and the 7th to get the first weeks show up in time.