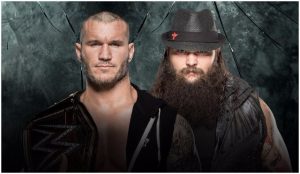 WWE Payback Change Possible – The Randy Orton vs. Bray Wyatt “House of Horrors” match at WWE Payback was originally set to be for the WWE Title, the WWE.com match listing now has no mention of the match being for the WWE Title. Announcers on Raw & Smackdown have also made no mention of the match being for the title, so it appears that it is now a non-title match. This must mean that maybe Bray Wyatt will win the match since he needs his victory in the rivalry. If he won though, he would have won the title and would mean 2 titles on Raw, so I guess this means he can win without a doubt now, and the title won’t be brought over after all.

Updates On Two Impact Talents – Crazzy Steve took to Twitter after last night’s Impact Wrestling tapings, and it appears that the former tag team champion is done with the company. Crazzy Steve first debuted as part of The Menagerie stable before teaming up with Abyss to form Decay). We wish Crazzy Steve the best in his future endeavors.

Additionally, Wrestlinginc.com reported that there were rumors that Homicide is already done with Impact Wrestling because he was moved to the Alumni section on their website. This was an error, and Homicide appeared on last night’s episode of Impact and worked the taping. He’s still listed in their “Alumni” section, while the Impact Wrestling Tag Team Champions LAX are not listed in the “Champions” section.

Steve Austin Speaks – On a recent edition of his podcast, WWE Hall of Famer “Stone Cold” Steve Austin shot down rumors about him having heat with WWE. Here is what he had to say…

“I will always be part of the WWE. The WWE will always be a part of my life. Man, I’m in this thing for the rest of my life. That’s the relationship I have with the WWE, so there has never been [any] heat, no this, no that, no whatever. I’m at a great place with those guys and I’m thankful for everything they’ve done for me. I’m sure they’re thankful for the things I did for them. And, again, I’m a WWE member for life, so anybody that spreads any of the internet B.S. or rumors, you’re hearing it straight from the horse’s mouth. You’re hearing it from ‘Stone Cold’ Steve Austin. I was down there taking care of personal business. And, anyway, I just wanted to clear that up because that was really chapping my ass and it was really bothering me.”