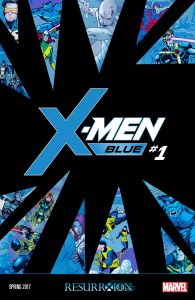 Ok, I’m done for this morning. Enjoy the comicy stuff.

Wolverine Revealed – In the less controversial “X-Men:Blue”, the book has been teasing Wolverine to join the team. However, that was a giant dick kick. Apparently the Ultimate Universe’s James Hudson, will join the team as Wolverine. It’s not even worth it, because they’re literally just re-doing the original Wolverine’s storyline. Just read what Mark Paniccia said about it;

I’m really excited to see this character become part of the team. Aside from the fact that he is a kindred spirit…displaced as the Original X-Men are…he’ll also feed into some themes X-Men fans are very familiar with. Like the original Wolverine, Jimmy doesn’t remember his past. And like the original Wolverine, he’s going to find a certain red head very attractive. Will this cause problems with Cyclops? Heheh. Just have to wait and see.

Watchmen Movie Coming – Despite Watchmen already having an actual film version, Warner Bros. is creating a Watchmen animated movie. This shouldn’t be confused with the animated side film with the original film, that starred Gerard Butler. Also, yes, Warner Bros. are still trying to develop the HBO series as well. And they’re popping up in the comics this year too. So yay, Watchmen?

Apple to Buy Disney – The Apple and Disney merger is not just smoke. The idea behind the move would see Apple using Disney’s library (Star Wars, Disney studios, Marvel, Pixar etc) to stream their content, in an attempt to take profits away from other streaming services, like Netflix. The deal is for $200 billion and the combined company would allegedly be worth $1 trillion. Since Tim Cook took over Apple, they’ve acquired Beats Entertainments, as well as several other companies.

Quick Hit: Labyrinth sequel has been announced. Shameik Moore to voice Miles Morales in the animated Spider-Man film. Rick Gonzalez and Juliana Harkavy both got promoted to series regulars next season.