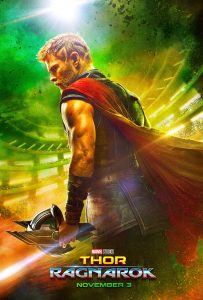 Usually I’d save this for the morning, but this is too much work to delay. I apollogize for not being as well informed about the politics of Indonesia, my only real exposure is from a video that I placed in the column.

Thor: Ragnarok Trailer – This fucking trailer made me so tired. Tired of this hype for a subpar franchise, for charisma lacking leads and movies that don’t know what they’re going for. Obviously Marvel is doubling down on the humor, and that’s been evident ever since the first “Avengers” film. Marvel doesn’t like having super serious tones in movies. Everyone is sarcastic, everyone is the same stock comedy character. It’s all the same levels of bland. This third film had potential, it’s bright, colorful and vibrant. However, it also doesn’t know if it’s a super serious film, or if it’s a super silly buddy cop comedy. Asgard has been leveled, Thor’s hammer was destroyed, and members of the Thor-team are on the run. But then Thor goes ga-ga over seeing Hulk and acts like a mentally challenged puppy having a stroke.
“GRRRRR WE’RE SUPER SERIOUS”
…later…
“HUR DUR DUR DUR DUR…WE’RE ALL FRIENDS; FIGHT TO THE DEATH!? NO THANKS! HUR DUR DUR DUR DERRRRR!”

But fans love it. I blame the public education system for not making this generation smart enough to know they’re being spoon fed gobs of sugar as “art”. But whatever.
Wonder Woman and Justice League are both coming. So I’m satiated for now.

Major Arrow Return? – Stephen Amell revealed on his social media accounts that Manu Bennett is returning to “Arrow”, though there was no real time frame on his return, be it this season or next. However, there were rumors and plot details about the season finale that hinted at Green Arrow working with someone unexpected to stop Prometheus and Talia al Ghul. Originally we all thought it was Malcolm Merlyn, and it still may be. However, with this news that Bennett is reprising his role as Slade Wilson/Deathstroke, it’s not hard to put two and two together.

Frankly the idea of Prometheus and Deathstorke going at it has me extremely….aroused.

Here’s the quote that hints to the unexpected alliance;

Marvel Controversy – There are some suspecting the Thor trailer was debuted when it was to help quell the rising tide of anger at Marvel and it’s parent company Disney. In the first issue of “X-Men:Gold”, artist Ardian Syaf put minor references to a geopolitical problem in his home country of Indonesia. There were religious-centric protests in Indonesia that saw Muslims taking a stance against the governor of Jakarata, Basuki Tjahaja Purnama. Purnama is a Christian, and has voiced concerns over a specific verse in the Muslim bible, that translates to;

O you who have believed, do not take the Jews and the Christians as allies. They are [in fact] allies of one another. And whoever is an ally to them among you – then indeed, he is [one] of them. Indeed, Allah guides not the wrongdoing people.

In a YouTube video by appabend, he explains in more detail why the protest was alarming. In the video, he states that the protest had numerous unnamed Muslims were chanting and pushing for the beheading of said concerns.

Syaf, who has a history of slanted bias in his work, took to social media to defend himself and was backed by the writer of “Ms.Marvel”, G. Willow Wilson. Wilson defended the Muslim faith and the verse at hand saying the English version has a different tone and context. However, it should be noted that Wilson also denounced Syaf.

Syaf has since gone on to Facebook to claim that his “career is now over” over the matter. Seeing how grotesque and hateful the messages were, it’s not surprising. The video above does a great job highlighting the issue better than I, CBR, BleedingCool, or ComicBook.com could ever do.

It should be noted that Christians and Jews in Indonesia are the minority.

Watch the video. It’s far more informative than you could get anywhere else.

Quick Hitters: G.J. Joe to redirect their marketing to target younger millennial’s with the upcoming reboot of the franchise. Whatever that means. New ‘Senses 8’ trailer debuts. Director of “Amazing Spider-Man” says films weren’t “disasters”. In a followup, the same director has now bought a dictionary to look up the term “disaster”. Don Rickles hadn’t recorded his lines for “Toy Story 4” before his passing this past week. No announcement has been made if the character will be cut from the film, or if they’ll replace the voice actor, like they did with Slinky Dog after his original voice actor, Jim Varney passed away.