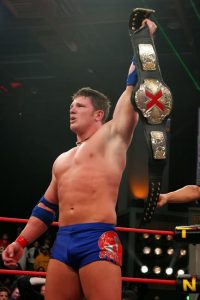 It’s a mighty tough day. If you’re watching the news, you know why. Also, on tonight’s SportsCorp, I’ll be eating a huge rant on Johnnyboy Coachmen, the WWE and ESPN for being twats. If the word offends you, but not the actions of Coachmen and the lack of action that ESPN has shown, then we have a problem.

NJPW-Shibata – So unfortunate, yet positive news out of Japan today. Fan favorite Katsuyori Shibata was hospitalized last night after a headbutt he delivered to IWPG Heavyweight Champion Okada caused a subdural hematoma that needed surgery to relieve. The report states that Shibata was suffering numbness on one side and was rushed to the hospital.

Below is a reaction video from our very own Alex Swisher while watching said match. The moment at the end of the video where Shibata headbutts Okada is where many believe to be the moment the injury occurred.

I was having a blast watching this match so I'd figure id share with you my genuine reaction to the psychopath that is Katsuyori Shibata. #NJPW #sakuragenesis2017 #katsuyorishibata #kazuchikaokada

Katsuyori Shibata was taken to hospital due to poor health following his main event match on April 9th at Ryogoku Sumo Hall. He was conscious and able to communicate while being admitted to hospital.

After a medical examination, he was diagnosed with subdural hematoma and surgery was conducted as part of his treatment. He is now recovering following a successful operation.

Updates will be posted as his condition progresses.

WWE Shakeup News – Ok folks, here’s what we know and we’re just going to put it all in one singular post.

One Moved Already
– Firstly Apollo Crews is one step closer to the unemployment line, as he was moved to RAW before the show even began. Crews has struggled since coming up to the main roster because the WWE are morons and don’t know how to make him a star. Ugh.

Two Already Spoiled
– A WWE App has revealed two new mobile cards, one with the outline of Charlotte Flair and one with AJ Styles. These two have been rumored for a while, and this all but confirms the switch up.

Two Backstage
– Despite the entire RAW roster needs to be at SmackDown, this is apparently news? As one would expect that the same is held true for SmackDown talents. But…whatever. Elias Sampson and Rhyno are backstage tonight at RAW.

Tag Team on the Move?
– You can expect Rhyno and Heath Slater on the move as well, as the WWE is reporting that a former set of World Tag Team champions are on the move. With this rumor, and Rhyno being backstage, this all but confirms their move.

Mauro Slams JBL – Mauro Ranallo is apparently happy to be done with the WWE. After being asked about how he felt about JBL getting knocked out during the 1998 Brawl For All, Mauro said;

Loved it when it first happened. Love it even more now.??

Later on, when a fan expressed his support for Mauro, he replied with;

It’s no surprise that Mauro and JBL have had issues. Mauro suffers from bipolar disorder, and JBL is known to be a strict bully backstage. So the two will undoubtedly not mix. JBL slammed Mauro on Bring it to the Table for missing SmackDown. The story is now catching fire nationally…you know, besides on ESPN.

Quick Hits: WWE star Paige is undergoing an evaluation today, to find out when she can return to the ring. WWE has filed a lawsuit over the breach and leak of WWE Studio’s film, “Eliminators”. WWE should be happy though, as more people will watch this film than any others before.