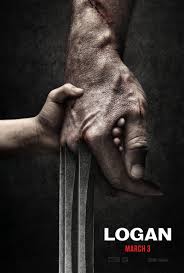 Now, I need to say I did like this film.

I did, but it wasn’t my favorite thing at all, and it certainly wasn’t as good as other X-Men movies. Yes, there was a human element to it, a finality and a bad ass little kid. The action was intense, and the violence was certainly Wolverine-flavored. The acting was good, the plot was logical and the resolution was fitting.

It just wasn’t as good as people are saying.

I think that’s because there’s a lot of factors at play here. This was the last hurrah for both Patrick Stewart and Hugh Jackman as Professor Xavier, and Wolverine. So there’s a sentimental element at play here. No two actors have been with one comic character (in the world of live action, sit down Kevin Conroy), as long or as consistently as these two men.

Another bonus for this film also comes in the form of the gore. This film, while by no means over the top, is far bloodier than films in the past. I think “Dredd” is one of the few movies in the last five years or so, that was as brutal or violent as “Logan”.

Another thing that went in favor of this film was X-23. There’s something about a decently talented child actor in films. They’re like dogs in films, the minute they show any hint of emotion after being or having neglected such things, everyone wells up. I’m pretty sure Stalin cried at the end of Old Yeller, and he’s evil.

That all being said, there’s not much to say about this movie that would be complimentary. The main villain only came into play at the end, the “real villain” was a clone of Wolverine who was faster and stronger than he was, which made Old Man Logan look (and I don’t care if you disagree) utterly pathetic. Caliban spent most of the film rolling around with the baddies pretending he was a Smashing Pumpkins Song (Specifically Bullet with Butterfly Wings). Xavier was apparently suffering from some degenerative brain disease but we only saw him not cognitive when Wolverine was giving him shots and pills.

The entire X-Men universe was destroyed, but we never left three spots, which looked just like every other spot, thus making it hard to know what “westerly” spot we were currently in. This film was also devoid of color. So much drab grey’s, brown’s and black’s.

Also, what the fuck was up with the “X-Men” comic book? At no time did they explain that. There was no “oh, they took our stories and made them in to fairly tales” line. Like, what the fuck?

The worst part of the film was having to watch characters who you watched for seventeen years, look old. Movies are supposed to be an escapism. It’s supposed to take away the burden and pressure of the real world and give you hope. It’s one thing to be dark and gritty. It’s another thing to have Xavier losing his memory to alzheimer’s or ALS (Lou Gehrig’s disease) and Wolverine slowly dying from an illness, later revealed to be adamantium poisoning. Why? Well, because that means when X-23 or Laura is in her mid to late 30’s, she’s going to start dying from the same thing.

HOORAY FOR THE REALIZATION THAT LIFE WILL HUNT YOU DOWN NO MATTER WHAT!

In fact, take away the two X-Men characters, and this is as far from a super-hero movie as one can get. This movie didn’t address any of the past characters, how they died, or anything of the sort. It barely feels like we were in the same universe as the other films.

Hell, the Reavers, who are supposed to be these anti-mutant, mutant-hating extremists who altered their bodies to hunt and kill mutants, are barely addressed. These are cybernetic-Nazi’s and they got underplayed the whole movie.

It’d give this film a solid 3 out of 5. It was good, but not “Oscar Good” as I saw so many claiming.

P.S. When the best part of the film is the Deadpool teaser at the beginning, you fucked up along the way.