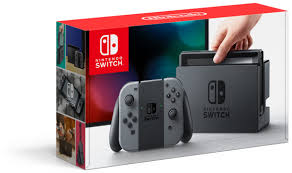 So thanks to one of our own, Matt, I had the ability to play the Nintendo Switch for a fairly good length of time.   While the system may not have the same power as a PlayStation 4 or an Xbox 1, it really isn’t designed for that. The first thing I want to say about the console is that that the video is vibrant. The entire expirence was lively and colorful and that was, granted not unexpected, but greatly appreciated.

As for the hardware itself, really visionary. The controls seem a bit small, and the buttons are way too smashed together to use it sideways, at least without feeling like Andre The Giant. However, the controllers in their standard form are very fun and are easy to hold on to, especially with that plastic docking station that turns the smaller half’s into a more authentic experience.

As for the portable experience, I’m a fan. The way the screen kicks out and you can play it (or watch things?) like that provide a good viewing experience. However, if you’re using the controllers without a controller port to stabilize them, the feeling of two, unconnected toggle-controllers will definitely throw you for a loop. It’s almost like a gamer is supposed to hold a controller one way. Then again, for thirty years, we never had a controller truly separated and only connected by wireless technology. It was way too trippy for me to get used to. I mean, there is a day where you could be totally lazy and have your arms going any which way, and plugging along. It’s…whacky.

As for the games, launch is never a good time to really gather information on games. Most times you get a lot of bug riddled nonsense, one or two major titles, and some ports from other consoles. Now that being said I played the newest Bomberman, not sure if it was a Switch exclusive, but it was for Switch and it wasn’t bad. I’ve never been a huge Bomberman fan, and the camera angle fucked with me a bit, but I have to say it was somewhat enjoyable.

Then I got to play the Shovel Knight prequel, and for the life of me I can’t remember the character’s name, but he was green, purple and carried a bad ass sickle. It reminded me of a cross between Castlevania and Mega Man. Difficult, but fun.

Then I played Breath of the Wild; the newest game in the Zelda series. Now I only played it for twenty minutes, but man, it was fun. While I didn’t like the weapon breaking function, or that you didn’t get the iconic weapons through the usual dungeon method, I was floored away with the coloring. The graphics aren’t what we come to expect from PS4, but instead of going for realism, they went for presentation and coloring, and it was a beautiful and awe-inspiring sight.

All in all, at a $299 price point, and tech that really is designed to push forward the video game genre, I’d say it’s worth it. Just as long as fun and easy game experience is your preferred option. I prefer games you can just pop in and play. There’s no fun in waiting 8 hours to get to the game. Now I don’t know if there is a significant load time when you first play a game, but whenever we switched to a new game, it was right to the fun. I liked that.

Will it sway me to trade in my PS4 to get a Switch? No. I like a few Zelda games, but I’ve never been big enough into a Nintendo exclusive franchise to dive into the console since the N64 days. That being said, I was only with PlayStation for so long due to Metal Gear Solid, and now….well….lets just say next generation I’m a free agent.

Maybe, just maybe Nintendo might once again win my business. From the brief experience I had with Switch, it was damn sure worth the wait.