We love tournaments here at NerdCorp and by gawd, we love New Japan too.  So what do you get a wrestling fan who has everything? MORE WRESTLING!

Starting during the Destruction tour until the final event ‘Destruction in Kobe’ on the 22nd, the rookies of New Japan will 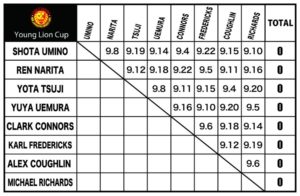 battle it out for the de facto Rookie of the Year award.  The cast of wrestlers include Japanese Dojo standouts Shota Umino, Ren Narita, Yota Tsuji and Yuya Uemura, while the LA Dojo will send all four of their students; Clark ‘Team Captain’ Connors, Karl Fredericks, Alex Coughlin and newer trainer Michael Richards.

Just like the G1, this will be a points based tournament, where the winner will either be the one with the most points, or we’ll get the top two point-getters squaring off in a final match.  Past winners include Mashario Chono (’87), Satoshi Kojima (’94), Kenzo Suzuki (’00), Ryuske Taguchi (’04) and Hirooki Goto (’05).