People who write reviews for t.v. shows and movies are as pointless as a toupee on a horse.  Sure, it’s fun to laugh at sometimes but they don’t provide any merit, much like a horse in drag.

We’ve all known this.  We’ve see the reviews for so many things that made us do the Chris Rock-face from Dogma.  How can you poorly review Dredd, or Hook?  An iconic film like Hook was slandered by people.  Why?  Because they hate fun apparently.

The Boys is the latest victim of this, registering only 50-odd “professional” reviews on Rotten Tomatoes, garnering a 77% (as of right now) opposite a 91% fan approval.  Now, I’m not going to sit here and decree that if you didn’t like The Boys that you’re an idiot.  On the contrary, I welcome those that didn’t.

What the problem is however, is that “professionals” don’t know how to properly review something.  They use long, uncommon phrases and terms to make their reviews seem smart.  They talk at length about subtle nuisances that don’t have any one meaning, and try to spin a meaningless subtext into something life changing.  They polish up their pretty little words and try and sell you the lie that they’re somehow smarter than you.  Hence why their opinion matters.

On Twitter today, I went beat by beat through every negative review snippet on Rotten Tomatoes.  Why did I just do the snippets and not go to the actual article?  To prove a point; if Rotten Tomatoes and the author can boil down their reviews into a singular sentence, then we can judge them harshly on said singular sentence.  Don’t sell me a car with three wheels and then get offended when I point out it’s missing one.  You did this.  I’m just playing along.

Firstly, let’s look at the only two negative reviews that have merit. 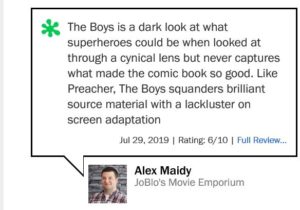 The Boys is a dark look at what superheroes could be when looked at through a cynical lens but never captures what made the comic book so good.  Like Preacher, The Boys squanders brilliant source material with a lackluster on screen adaptation.
– Alex Maidy of JoBlo’s Movie Emporium

The character development from the comics isn’t here and without that you really don’t understand who the The Boys are, so you can’t really side with them-and in their twisted universe they need someone on their side.
– Shernin Nicole of Geek Girl Riot

Why Nicole and Maidy gets spared here is due to the fact they have a reason for their disapproval or criticisms; the comic was better.  A cliche for sure but not a dishonest point of view.  Many people watch adaptations due to their love of the original.   These two reviewers have feelings that back the idea the comic is better, and that’s their point of contention with the comic.

I disagree, but I respect their stance.

The rest however..the rest are garbage.  From here on out, I will be sourcing spoilers, so you’ve been warned.  Stop reading now and go away if you don’t want scenes of the show to be revealed to you.  Also, for context, I will be pointing out that a few reviews were only done to the pilot episode.   You may think it’s unfair of me to judge these reviews because they only got to see one of the episodes but realize this; they didn’t worry about watching the other 7 episodes before writing a take down piece.  Why do they get spared?

The Boys fails to be truly subversive in ways that count more than just wagging a middle finger at Marvel CEO Kevin Feige
– Nick Allen of RogerEbert.com

So firstly Mr. Allen, at no point in the series is anything done to mock Marvel or specifically Kevin Feige.  Secondly, even if if were done, why does that matter? How does that take away from the quality of the series?  You should review the writing, the acting, the effects, the plot and the directing.  Those are the five tools you can fairly criticize without sounding like a tool.  The “middle finger” that was apparently pointed at Marvel is not a sign of quality.  Juts your bias.

Reviewer Review Score: -3 out of 50. Would not review-review again.

The Boys isn’t the bold deconstruction of superhero tropes its creators seem to think it is.
– Glen Weldon of NPR.

Firstly, Garth Ennis is the creator and he hates anything that has to do with everything. He’s a bitter schmuck.  Secondly, show runner Eric Kripke said the show was a deconstruction of superheroes and it is;

Deconstruction: The process by which the audience identifies the elements that make up the construction of meaning within a text.

Thirdly, no one said the word ‘bold’, you did.  Reviewer seems to believe that putting your own facts into an element makes it something inherently real.  It doesn’t.  It makes you a bias-fuck.

Reviewer Review: 23 stars out of 2000 super novas.  Would not review-review again.

The title may be the name of badasses tasked with taking these mega-human weapons of mass destruction down. What it’s really referring to is it’s ideal demographic.
– David Fear of Rolling Stone.

This reviewer seems to indicate that catering to or supplying content to men is a bad idea.  Even that of boys, i.e. to say children, is somehow a market not worth exploring.  That’s sexist in thought and principal.  To claim that any demographic, no matter how big or small, shouldn’t have media made for them is absurd and offensive.  This reviewer has no concept over the idea of equality.

Reviewer Review: 5 Hoods out of 5. Would not review this alt-trash ever again.

That said, for a show so dedicated to tearing down superhero tropes, The Boys tragically doesn’t have a lot to say about tropes, beyond a commitment to absolute nihilism.
– Liz Shannon Miller of the AV Club

The reviewer doesn’t understand the concept of tropes or nihilism but is too ashamed to ask anyone what they mean.  If they did know, they would be able to see that the word ‘trope’ identifies a theme.  The theme in The Boys is not just that superheroes make for lousy heroes (a Garth Ennis staple), but that also there is no such thing as good or evil, just messy shades of grey.  Also, nihilism means “the rejection of all religious and moral principles, in the belief that life is meaningless.”  Yet, the show features countless acts that disprove that accusation.  Mothers Milk’s love for his daughter.  Hughie falling in love again and being able to let go of his pain.  Stillwell’s desire to do all she can to keep Homelander happy, as to spare her child from his wrath.  Queen Maeve’s hapless reaction to Homelander’s plane decision and the inability for her to cope with such a disaster.

Reviewer Review: 0 out of 123 passengers lost.  Would review-review again, because of how hilariously dumb the reviews will be.

But the bottom line is it’s still yet another comic book series, arriving at a time when television is already groaning under the weight of them.
– Pat Stacey of the Ireland Herald.

This reviewer has a history of not reviewing much of anything in this realm of shows.  Yet he has the same influence power over a fan of the genres.  Why?  This is a bad principal.  You’re not marketing Ford pickup trucks to vegan hipsters, so why ask them to review your product?  This is the inherent flaw with being a “professional” on Rotten Tomatoes; there’s no criteria to be one.

Reviewer Review: 1 leaf of a four leaf clover.  Would not review-review again.

When the series finally drop…it will reach a point where the audience craves more, and it’s hard to say if the show will be able to reliever that more when the time comes.
– Merrill Barr of Forbes

Here is a series that milks pain for laughs; embraces misery, cruelty, and fountains of gore all in the name of scoring a cheap joke.  It’s an aggressively nasty show, and it beings to wear you down
– Chris Evangelista of Slashfilm.

This reviewer, who writes about Quentin Tarantino’s Once Upon a Time in Hollywood being a sweet story about Charles Manson, believes that heartbreak, loss, and vengeance are played for laughs.  He did not watch the entire series at all, or has a morbid sense of humor.  Considering he thinks a story about murder is sweet, that’s entirely possible.  There is some dark humor but it’s never unnessary or forced in for cheap laughs.  If he were a more dutiful reviewer he’d know this.  Instead this reviewer plays to his agenda.

Reviewer Review: -5 slashes out of 40.  Would not review-review again.

The series is a little too fond of it’s antiheroes to really throw them in the muck.
– Steven Scaife of Slant Magazine

This reviewer believes that all characters should be unlikable.  Otherwise why complain about this show in that regard?  This is the show that had Hughie held back as a super ground her ass into a man’s face, only to crack his skull open and kill him. Why was he held back?  Because Hughie would of been late anyway, so why bother?  That’s pretty mucky if you ask….anyone.  This reviewer’s prospective is too much like the magazine he writes for; slanted.

Reviewer Review: incomplete, much like the reviewers viewing.  Would not review-review again.

The premiere episode can’t read the room, mistaking nastiness for edginess and thinking that simply showing more women on screen is progress.
– Kimber Myers of the Playlist

This reviewer only saw the pilot episode, that’s not in dispute. Due to this and not realizing the series plays more as a movie not as a show, the reviewer shows that progression, plot advancement and character growth don’t matter to her.  Otherwise why be so cynical about the first episode?  She undervalues Starlights entire arc, growth and ability to hold onto her morals.  Something that is far from nasty or edgy.   It’s pretty damn progressive.

If the goal of The Boys pilot is to make viewers want to watch the second episode, consider it a success.  If the goal is to make us confident in the series’ enjoyability, consider less successful.
– Reuben Baron of CBR.

This reviewer works for CBR.

Reviewer Review: Negative Infinity out of Infinity.  Would not review-review again.

The Boys could become any number of things as it rolls on.  But the tone it struck in its first outing was a dully familiar one.
– Daniel D’Addario of Variety

This reviewer has seemingly seen many shows where a speedster turns a human being into nothing but bodily fluids.  Would be curious to know what shows this happens in.  Gossip Girl? I bet it’s Gossip Girl.