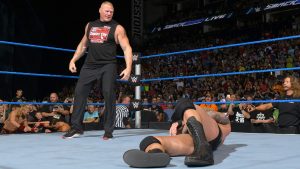 We’re in the midst of Snow-ocalypse here in the North East, and with Brand Banter tonight, we’ll try and keep you nice and warm with rage as we talk pro wrestling news. So lets get into the news tonight, Space Monkey Mafia members!

Brock Lesnar 86’ed WrestleMania Match – And I don’t blame him. Lesnar was so uninterested with fighting Shane McMahon at WrestleMania, he started lobbying for a new opponent before Goldberg ever came back. When Goldberg apparently came back he started pushing towards Lesnar vs. Goldberg. It appears as though Lesnar wasn’t the only one who didn’t want to see Shane-O-Mac in a marque role.

WWE Talent Opposed to Shane vs. AJ? – Corey Graves flat out said AJ Styles and Shane McMahon wrestling at the grand show, “…does nothing for him”. Now, JBL did his typical nonsense of schilling the WWE corporate message, but Graves wasn’t buying it and flat out said the match was far from what Styles deserved, claiming Shane couldn’t “hang” with him.

AJ Styles on WrestleMania – Styles was interviewed on Sam Roberts show, and because Roberts is a WWE puppet who toes the company line, he and Styles made sure to put over the idea of Styles just being at the show, saying;

Dude, I look forward to WrestleMania. You’ve got to know that this is something that I never thought I would get the opportunity to be in. I remember watching the WWE Network going, ‘wow, I will never get the opportunity to be in a WrestleMania.’ And although I tried to play the game of like, ‘naw, it’s not a big deal to me,’ it kind of is. It’s WrestleMania. It’s the biggest thing going on when it comes to what we do, and so it was a big deal to be at WrestleMania, especially with all the talent that we have to actually be there. I mean, think about all the championships we have. There’s no way we’re going to be able to defend them all at WrestleMania, at least not on the show. So to be a part of WrestleMania is a big deal to me.

So the WWE is really trying to sell the idea that Styles and Shane is totally hip and cool and not a waste of time for Styles to be associated with a match that’ll most likely be nothing inspired.

Quick Hitters – Tonight’s SmackDown will only have Tom Phillips and JBL on the table, as David Otunga is off filming a movie and Mauro Ranallo couldn’t make the show due to inclement weather. Kurt Angle is backstage at SmackDown, likely filming interviews with various WWE outlets and local media. William Regal will most likely not being into the WWE Hall of Fame this year. WWE intends on another round of “Legacy” Hall of Fame inductees.