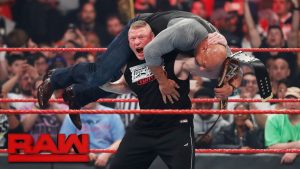 Goldberg/Lesnar – The upcoming WrestleMania main event for the WWE Universe Championship will feature a very short match, according to The Observer. Word has it that the match between Goldberg and Lesnar, which have all been very short with every match they’ve been involved in, will be just as short. The match is expected to be mere minutes, if not shorter than that. So, if you were hoping for a long, drawn out, exciting WrestleMania main event…forget about that.

Anthem Releases Presser – This was odd. Anthem’s Impact Wrestling inaugural show did not do impressive numbers on Pop TV. It did on par with previous weeks shows, sure. But not something you’d be excited over. Too be fair, it wasn’t the most amazing show, and Alberto El Patron isn’t the draw many make him out to be. So the show did what you would expect. Yet, that didn’t stop Anthem from releasing a presser touting the amazing episode that was. They also use the press release to focus on the fact that the Impact Wrestling YouTube channel, and other various social media accounts, blew up with an alleged 2.4 million unique views. Now, that’s not a bad number at all, but I’m not sure it needed a nine paragraph release to tout that success. Peculiar move to say the least.

Not signing with Impact:

At the last minute, TNA [Impact] came in hard and heavy and made me a significant offer. But the way I look at it is this: If I can’t go back some place and top what I did before, then it’s kind of pointless. I’m not blowing smoke up my own ass here, Bully Ray was the top heel in TNA. I generated ratings—me and Jeff Hardy drew TNA’s biggest house of all time at Lockdown, and I had my run with Hulk and with Sting. If you take a look at the landscape of TNA and their locker room, I don’t have anybody to top what I did before.

We came one day away in August from debuting Bully Ray in WWE. At the last second, the decision was made to not go forward with it. Bully Ray was ready to go, but that’s all I can tell you. We were one day away, and they had to pull the plug on it.

Quick Hits: WWE has formally released Jack Swagger. Roman Reigns and The Undertaker was made official for WrestleMania. Finn Balor is backstage at RAW tonight. Paige’s Father thinks WWE running the UK Tournament live events around the same time his WAW promotion is filming television was done on purpose to hurt WAW’s attendance.