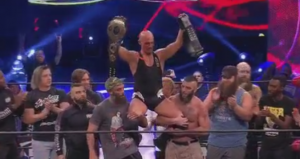 I know this is super late. I’m watching NWA-TNA weekly’s while I write this. I’ve been a bit MIA the last two days, but I supplanted the news and such with a great new video, so check it out, Space Monkey Mafia members! Lets get to the actual news-y type stuff though.

Dream Comes True – I wanted to wait to write about this tonight, after the show went off the air when I knew the results. I’m proud as hell to announce that former WrestleCorp guest, and (I think) friend of the show, Christopher Daniels has finally won his first world title in Ring of Honor at the age of 46. I’ve been watching him since his TNA days, and knew about him when he won a WCW contract back in the day. So for me as a fan, I’m elated for Daniels. He more than deserves it. The fans in Las Vegas were a bit dead, but they got sucked in by the amazing performance by both men, and we even got another turn when Kaz ran in and cost Adam Cole the title, revealing his true allegiance to Daniels all along. It was beautiful. Congrats, Daniels. Few will ever deserve it more.

Reby Sky Can’t Stop Bitching – Reby Sky is showing everyone why no one in the industry likes or respects her. Don’t forget that Awesome Kong went after this woman, and now, more and more, I’m starting to understand why. Sky’s comments are largely jumbled. She blames the current ownership for the previous ownership’s mistakes, and acts like all the things they did for Billy Corgan and Dixie Carter should mean something to Jeff Jarrett and Anthem. It’s pretty hilarious. She also goes on to say that Impact Wrestling has threatened to sue them over the Broken Universe concept, which Anthem exec Ed Nordholm attributed the success to not only Matt Hardy, but also Jeremy Borash, Dave Lagana, James Long (OVW’s Paradyse), and Billy Corgan. The more Reby rants, the more it seems like they know Borash and company had a lot of input into this gimmick, and no other company would let you take intellectual property with you. This is really pathetic on her part. Fight me, Reby. I’ve defended you more than most in the last few years, and if I’m telling you to be quiet, maybe you should?

Eli Drake Confronts Jarrett – It should be noted that “confront” isn’t the right word. I was told by a high level Impact Wrestling official that Eli Drake literally walked up to Jeff Jarrett, and asked to talk to him. The two had a short, and cordial conversation, where Eli revealed he wasn’t happy about the insinuation that the wrestlers were some how responsible about the struggles of the company. Jarrett apparently told Drake he understood, that wasn’t the case, and it was the mismanagement of Dixie Carter they were really going after. I’m also told by another top exec, that people backstage in Impact Wrestling were impressed that Drake stood up for the locker room.

Top Star Not Signed With Impact Wrestling – One of the few talents that was loved by Jarrett and Carter was Gail Kim, who apparently remains unsigned with the company. That’s not a big deal for Kim, as she’s taking time off anyway, and she fully expects to be back in Impact Wrestling in the near future, as she’s a corner stone of the company.

Quick Hitters: Finn Balor returns to the ring with Jericho and Zayn against Joe, Owens and Triple H in Buffalo, New York. Jim Ross claims any and all talks with Jarrett and Impact Wrestling were merely Jarrett and Ross brainstorming over ideas for pro wrestling. John Cena to star in “Daddy’s Home 2”. WWE announces United Kingdom Tournament tour, which begin in May and coincide with the WWE’s post WrestleMania tour of Europe.