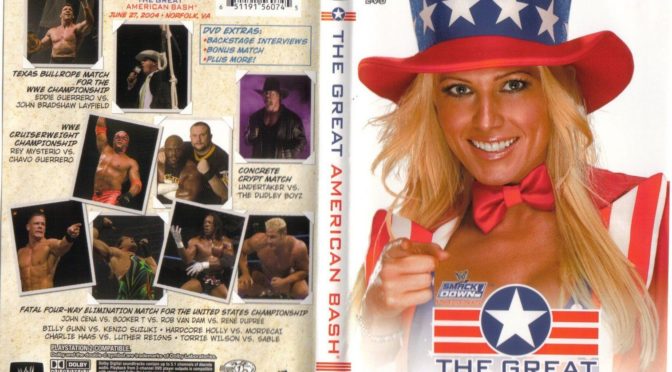 The 2004 Great American Bash is among one of the worst shows the WWE put on during the Ruthless Aggression Era. It became one of the most maligned shows mostly due to the injuries and issues the roster had at the time. Kurt Angle and The Big Show were hurt, and unable to be used, which hurt. Test, who was rumored to be debuting on the brand, had to have spinal fusion surgery and couldn’t compete. Rikishi, who was just a tag team champion on SmackDown a few months prior, was overweight and refused to get his size under control.

So needless to say, the SmackDown brand had a few issues with the roster. Yet, we’re going to maximize the talent we have with one caveat. Usually, with these rebookings, I try to keep it exclusively with the talent that was available at the moment. I’m still going to keep in that tradition but I’m going to make sure one free agent who wasn’t really a free agent gets brought back.

At this time, a RAW superstar was wrapping up his run as an active wrestler and was being forced into retirement. This man was seen as having nothing left in the tank. In 2021, at the age of 50, he’s still going. This man, is, of course, Tommy Dreamer. Since anyone with half a clue would look at the SmackDown brand and go “we need name value”, we’re going to assume that if I could book this show the way I wanted to, that I’d have to ability to snag a guy who wasn’t being used.

We’re going to start things after Judgement Day and build-up to The Great American Bash. Let’s go with the main event, which will remain Eddie Guerrero and JBL. In fact, that might be the only match that remains the same. While some don’t like that feud in hindsight, due to the popularity of Guerrero, it worked to get over JBL. While JBL is a piece of scum, he was wildly entertaining as a heel champion, so that’s going to remain intact.

The main event of the original, The Undertaker and The Dudley Boys, that’s done. Off, gone. Terrible idea. We’re moving JBL and Guerrero to the main event, and we’re going to add a lot of blood to that.

So who does that leave us for the upper-midcard? We have John Cena, Rob Van Dam, Booker T, The Undertaker, Team 3D, and Rey Mysterio.

Firstly, let’s roll with the idea of Spike Dudley being the Dudley Boyz boss, but let’s roll that out sooner than later. Originally it wasn’t until late July but this time around we’re going to introduce it after Judgement Day. Having lost to Rob Van Dam and Rey Mysterio, we’ll have Spike berate his brothers. This will cause something in them to snap, directing them at their target; John Cena.

The Dudley’s would enter into a feud with Cena where the three brothers (Bubba, D-Von, and Spike) would routinely attack Cena; setting up a four-way at The Great American Bash.

Now, for The Undertaker; he was being set up to feud with Mordecai (aka Kevin Thorn). That hadn’t happened yet, so they were buying time trying to build up the future Kevin Thorn for ‘Taker. This time around, we’re going to actually go ahead with the idea. Thorn wasn’t a bad hand, even at the time, the WWE just didn’t know how to use him. So instead we’re going to have Mordecai run afoul with Kurt Angle, and we’re going to “injure” Angle with a Luther Reigns heel turn…or a heel-heel turn? Either way, Reigns will betray Angle and side with Mordecai as his disciple. We’ll drop his name to just Reigns and have him assault The Undertaker at Mordecai’s behest.

I’m also going to make another caveat and bring back Sean O’Haire as well. Though he won’t make his return until post-match. So at the Great American Bash, we’re booking The Undertaker and Reigns.

At the time originally, The Dudley Boyz defeated Rico and Charlie Haas to win the SmackDown Tag Team Titles (now the RAW tag team titles; don’t ask). Since the title change happened in June, we’re going to erase that from the books. Instead, we’re going to have Johnny Stamboli and Mark Jindrack win them. The duo were two of the most athletic wrestlers to ever step into the ring and that’s their gimmick; the ultra-athletes. At least, that’s what it is to start.

They’ll win the belts and defend them against a reunited Billy and Chuck. The two guys would revert more to their core gimmicks; Billy’s obsessed with his ass and Palumbo thinks he’s Lex Luger but with dark hair. The two will feign going all the way back to their Billy and Chuck look, even bringing out the trunks for a night with Rico in tow.

The WWE Cruiserweight Championship will end up remaining the same because Rey Mysterio as Cruiserweight champion and Chavo Guerrero having issues with it is just too good to pass up.

We’re going to also have a feud with Booker T and Rob Van Dam, centered around them still being friends after their move to SmackDown. Since Booker was already a heel, RVD would routinely dismiss Booker’s heelish ways as just “Booker being Booker”; that was until they were involved in a contender’s match for the tag team titles. RVD would get the loss and Booker would snap and attack his one-time friend.

We’re sticking to just nine matches, as that’s what the original show had. So for the final three, we’re doing Charlie Hass (with Kurt Angle) feuding with Kenzo Suzuki. Haas would now be the All-American Charlie Haas, would wear red, white, blue, and gold trunks and would be accompanied by Jackie Gayda and Torrie Wilson, while managed by Angle.

The other match would see Hardcore Holly getting interrupted by a debuting Tommy Dreamer on the SmackDown brand. Dreamer would be part of a “Hardcore Championship Open Challenge” angle where he’d challenge people to see if they were hardcore enough to be the Hardcore Champion.

Lastly, we’re doing an X-Division stable by doing an eight-man tag. Billy Kidman and Paul London would tag with Scotty 2 Hotty and Scotty’s new partner Shannon Moore. They’d square off with a new uber-villain in Nunzio now with all-black tights and having a small undefeated streak where he’s made everyone tap out. The emphasis of his nickname “Scicillian Shooter” is really leaned on. He’ll gather up Jamie Noble, Akio (Jimmy Yang), and Funaki, who recently turned heel. The person who gets the pinfall gets a shot at the Cruiserweight championship next.

Akio, Noble, and Funaki would also (re)form the Jung Dragons, and would align themselves with Suzuki after the Bash.

Reigns (w/Mordecai) vs. The Undertaker

The Results: Nunzio would get the win over Moore after the new Jung Dragons teamed up to take care of the other faces on the ringside floor. It’d be revealed that Nunzio paid them off.

Dreamer would beat Holly in a six-minute hardcore spotfest that would put over Dreamer’s Innovator of Violence nickname. Dreamer would “retain” the title, which is at this point, unrecognized.

Charlie Haas would defeat Kenzo Suzuki with a leg submission in under two minutes. Suzuki would then make his alignment with the Jung Dragons know, and the four would become a very dangerous unit.

Rey Mysterio would retain cleanly over Chavo Guerrero and as Rey celebrates, Nunzio would come out and “cripple” Mysterio’s ankle. A few segments later, we would also see Chavo, his father, and Eddie have a moment where Eddie taunts his nephew and brother.

The team of Jindrack and Stromboli would defeat Billy Gunn and Chuck Palumbo to retain their tag titles; only after Polumbo was “attacked” and showed up late to the bout. He’d turn on Gunn and the three men would easily dispatch Mr. Ass. Then it’d be revealed that the Natural Born Thrillers were back. They’d end up bringing in Matt Morgan as well, and would slowly transform into babyfaces throughout the summer.

The Undertaker takes a beating from Reigns who is nonstop for four straight minutes but Taker is able to hit a desperation Last Ride powerbomb to turn the tide, followed by a big boot, a chokeslam, and one Tombstone that Reigns just brushes off. ‘Taker would hit another Last Ride and another Tombstone to finally get the win but Mordecai garners ‘Taker’s attention while Sean O’Hair side kicks Taker and hits the Seanton Bomb.

Rob Van Dam would defeat Booker T in a grudge match, with the winner being named the WWE Championship No. 1 Contender for SummerSlam.

John Cena would be able to fend off The Dudley’s and Spike but only after Bubba accidentally took out D-Von and Spike got caught in an AA.

Aftermath: So JBL’s first feud would be with Rob Van Dam and not The Undertaker. They’d culminate at SummerSlam, with JBL winning. The Undertaker would recruit The Bashams to fend off the surging Mordecai, O’Haire, and Reigns.

Big Show and Kurt Angle would return to the fray as well, with Angle returning as a face to side with Haas and Big Show turning heel against Tommy Dreamer. Angle and Haas would deal with the Jung Dragons, while Nunzio would challenge Mysterio for the Cruiserweight gold. Shortly after that feud, Mysterio would take on Spike for the belt as well.

London and Kidman, The Dudley’s, the Natural Born Thrillers, and the Jung Dragons would all vie for the tag team titles, while Booker T and John Cena would start a feud over the US Championship. Eddie and Chavo would revisit their feud from the start of the year, while Scotty and Shannon Moore would dive full-on into being a tag team.

Admittedly this was much harder to do. Maybe I need fresh eyes and another stab at it.