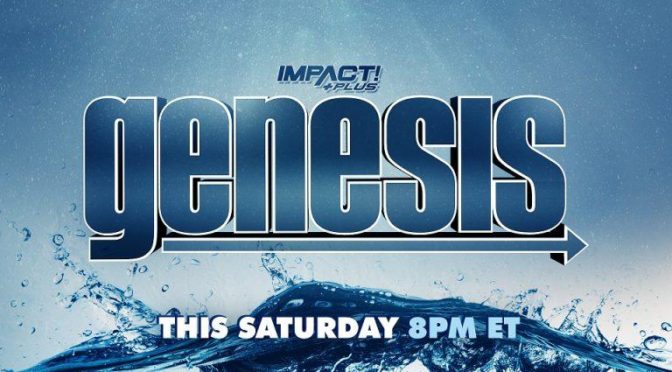 This was a great match, made even better by the likes of Chris Sabin and Alex Shelley speaking for Suicide. Especially Sabin, who basically spent the entire hype-package quoting the lyrics of Suicide’s song to put him over. 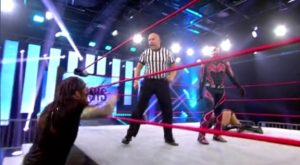 The match itself was pretty good, especially considering whoever is under the hood (probably Caleb Konley) has to wrestle a style that the likes of Christopher Daniels and Frankie Kazarian crafted for the character. The spot where Austin tried to give Suicide a paper cut with the playing card was incredible, especially the no-selling but it would’ve been better if the camera would’ve shown Austin’s reaction. Austin hits the Fold for the win, however.

KC Navarro has the chops, the look, and the skills to be a star in the company. He and Blake Christian may have had the match of the

tournament, and both should be signed immediately to long-term deals. Navarro really showcased his promos skills, which outshined his in-ring stuff, but his ring stuff was really good. I won’t spoil the finish, just go check it out, because the whole sequence was great.

I loved the back and forth power battle between these two. Cousin Jake or Big Nasty as Madison Rayne called him, really is a great worker, and his whole whiff on the apron dive was brutal. Watching him hit the ropes after running down the ramp and missing Davari was the equivalent of a huge hit in football. I was genuinely worried about his health and well being.  Jake hitting that modified Black Hole Slam really does have an impact on him. I think a name change to Big Nasty and new music would really help him get over.

Crazzy Steve starts off using monkey poses. I love Steve. This was a good showing for Steve though Lamar wasn’t as impressive as Christian before him. Steve going over was the right call, as IMPACT needs to build up their loyalists.

A notably slower outing than the first Ace Austin bout. It was still a good bout, no doubt, as it highlighted the style difference between the two wrestlers, not putting over Jake though really didn’t make sense. IMPACT needs to put over new stars and needs to develop homegrown guys. Jake is one of those guys who could easily get the rub. His not winning is baffling.

Blake Christian selling how scary Crazzy Steve (or how crazy he is) to start the bout is a great way of getting over Steve. 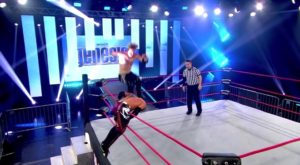 Steve is a hell of a hand who stands out among a wrestling scene that is afraid to be unique. Steve losing his mind after Christian accidentally kicking Steve’s monkey was the storyline we all needed. Christian sealing the win with a 450 splash off the top to a dangling Steve was incredible. Was hoping for a Steve win, but whatever, Christian was impressive enough.

This actually had a nice styles clash. Jazz didn’t go power with her move-set, so much as gritty.  She used the ropes, close shots, hair pulling, the point of her elbow, all things that hurt but don’t look flashy. It’s clear Jazz isn’t what she once was, but for being 48, she’s still impressive. 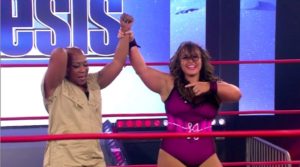 Winning with a rollup reversal is a great way to finish it. Wrestling needs more finishes like that because much like a submission, a pinning move like a rollup is all about position and pressure. The only difference is you’re not trying to get a tap, but hold someone down.

Ace Austin opens the pre-match by sending Sawyer Fulton to the back. The match has longer pauses between big moves far earlier than you’d expect, which is a great thing because it highlights how tired guys have become. 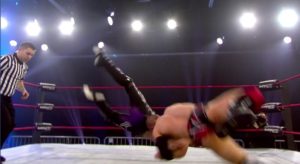 Austin hit a nice, out-of-nowhere Fold to get the win. He’s not who I wanted to win but IMPACT does need to get guys over and build their stock, so his winning makes sense. The big issue is the X-Cup trophy. It’s small and cheap looking.

I Quit
Willie Mack vs. Moose

A much slower match but a lot more emotion put into each move, Moose and Willie Mack really had a great brawl. Moose has this five-star logo on his trunks, not sure if it’s new or not, but it’s the first I’ve seen of it (or remembered of it.) That’s a nice little nod to the five-star scale of wrestling. Josh Mathews, who isn’t very good at his job, nearly actually made a good point. 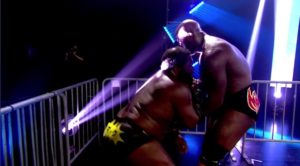 He pointed out that the wrestlers should consider saying “I Quit” to preserve themselves for Hard to Kill, which is a week away from Genesis. However, neither man is booked for Hard to Kills, so why bother? Moose dominates the end of the match, resulting in Rich Swann coming out to spare Moose from getting his head incaved. Swann offers Moose a title shot, and Moose accepts, then quits.

Really solid show, with great wrestling, and great story telling. The young, newer talents really showcased what they can do and Steve and Cousin Jake really upped their game. The biggest issue is that Cousin Jake really had a golden opportunity to win the tournament and establish himself higher up the card.