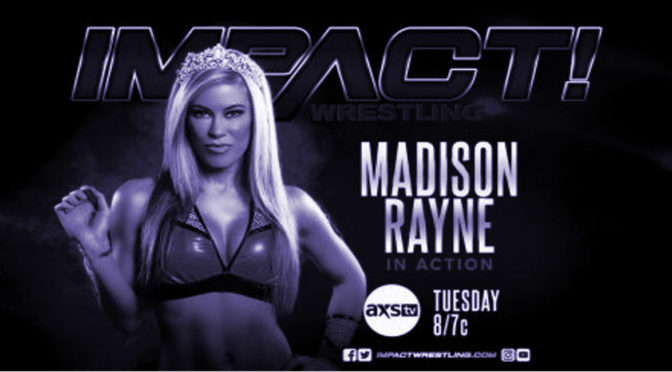 Despite being around over a decade, Madison Rayne has found a new way to keep herself relevant in ever-changing times for a new generation of fans.

Madison Rayne will never be remembered as the ‘Bret Hart of the Knockouts division’. That’s just the truth. There are better workers than her, and there are far better athletes than her. Rayne has become almost a relic of a bygone era, where representation on television was enough to constitute a women’s division.

This isn’t 2009 anymore, and women’s wrestling has come a long way. It’s almost taboo to criticize women in the industry because how dare we hold them to similar standards as the men. Yet, it shouldn’t be shocking to say that women in wrestling have never been athletic as they are today. We’re in a renaissance. There’s a reason for that, and it comes from a place of respect.

Before the late ’00s, women were not used as wrestlers that often. Sure up until the 80s they were but even then you weren’t attracting the top athletes in the world because the money for these women was nowhere to be found. Yet after the Knockouts division launched and the rise of Shimmer in the states, female athletes started taking notice of the possibilities of pro wrestling.

Attractive “bimbos” or “divas” were phased out. Models, no matter how “fit” their labels were, were no longer the chosen profession to which to pull from. Gymnasts started to crossover. Mixed martial artists started to see the value. Basketball, volleyball, hell even amateur wrestling and a variety of other sports started to see their athletes sign up for pro wrestling. Gone were the days of hoping for a passible match with the women on the card, to a new day where women like Tessa Blanchard and Jordynne Grace are now redefining expectations for female athletes.

That means that women like Rayne should be getting phased out as a newer, more athletic crop of women take their place.  Yet Rayne is still standing. Not just still standing, but more relevant than she’s been in nearly a decade. She’s not the athlete that most of her roster-mates are but she’s upped her character work to such a level that her new “Locker Room Leader” gimmick is working. She’s steering into the skid of her fading generation. She’s aware she’s got to find a new way to stay relevant and she did just that.

Rayne has become a beacon of how to work outside of the ring. From the way she heckles the crowd from inside the ring, to her ability to be snide – yet hilarious, has given inspiration to wrestlers everywhere that your ‘sell-by date’ isn’t as near as we thought. This is just one of the many reclamation projects IMPACT Wrestling has taken on itself to do, and do they have. Rayne’s new shtick has gotten a great reaction and the next chapter of her career could very well be the best. Even if she isn’t as hard-hitting as Blanchard, as jacked as Grace or as athletic as Charlotte Flair.

Rayne has found a niche that isn’t being delivered to and is doing it better than she has before. She’s standing out in a way that makes her unique and that is how you stay relevant in new eras.