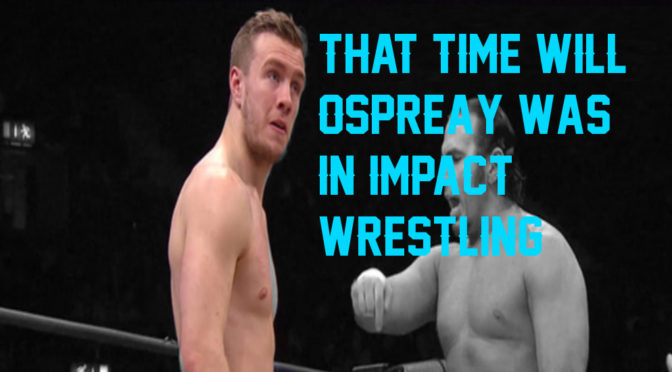 I swear this isn’t a ‘baity’ headline.  I was going to just write about how almost four years ago Will Ospreay was going to sign with IMPACT and laugh about the ‘almost-was’ that is Ospreay in IMPACT Wrestling.  Then I saw part of a quote that keeps getting forgotten by time.

The part of the quote where Ospreay slammed The Broken Hardy’s gimmick as the overwhelming reason why he didn’t come in.  The seeds for the Broken Hardy gimmick weren’t planted until a few months after Ospreay’s lone set of shows for IMPACT in Wembley of January 2016, but he cites that creative direction as the reason why he wanted no part of IMPACT, going into full detail about it in the summer of 2016, saying;

I can’t say, like, anything bad about TNA because of the pure fact of, like, I refuse to bury a company. I’m too nice.  I didn’t fit. I mean, I was welcomed with open arms. The guys there were fantastic, but I’d just done it for the pure, simple fact that I wanted to wrestle in Wembley Arena. Like, if everyone wants me to be brutally honest, I’d done it just to wrestle in Wembley

The way it all went down, which was like, they didn’t do their research. Like, they thought I wasn’t signed. Like, to be fair, I was lying out of my ass. Like, I said to them, ‘I’m signing with New Japan’. I was lying, like, through my teeth. I just did not want to be with TNA because for me, personally, especially with the recent, video that the Hardys released. It’s not me shooting, but I just don’t like it. I think it was so bad.

Via The Wrestling Compadres Slamcast

I want to reiterate, where he says “the video the Hardy’s released”, was in reference to the preview for The Final Deletion, which came out in July.  Ospreay made his intentions known in January though.

For Ospreay to not trust the creative direction of the company at that time isn’t something I can really bag on him for.  Him lying however, is just as classless of a move one can do.  Obviously he’s not sweating the small stuff though, he’s done quite well for himself in NJPW.  Though, I wonder what would’ve happened if he had more faith in Jeremy Borash?

What would of Ospreay’s career looked like?  Would he of become like Eddie Edwards and become a company lifer?   Clearly we can take away that Ospreay isn’t the greatest talker…So I can’t imagine he’d of gotten a huge angle like the Hardy’s got, but around this time we were getting a lot of great angles from IMPACT.  The Rise of Drew Galloway, Bobby Lashley’s dominance, EC3’s fantastic feud with Rockstar Spud and the subsequent growth of Spud as a character.  All of those moments and angles were the core of 2016 and an Ospreay X-Division title win would’ve been the cherry on top of that ice cream.

Now, I’m no fool.  Ospreay wasn’t going to help turn around the fortunes on his own, and IMPACT in 2016 had a power struggle that resulted in both Dixie Carter and Billy Corgan losing ownership to Anthem, who bought them out and paid off their debt and legal bills.  Since Anthem took over, IMPACT has started to re-establish itself as a brand to take notice of.

Who knows what the future holds, Ed Nordholm’s (alleged) feud with Killer Kross isn’t winning talent over, but besides Kross, there hasn’t been too many people slamming IMPACT from within.  Hell, I’ve spoke to several guys who work on open deals with IMPACT who praise the way things are done these days.

So anything’s possible, especially if IMPACT is able to rehabilitate the relationship with NJPW.  For now though, Ospreay in IMPACT is nothing more than a cool little note in both the company and wrestler’s storied career.

For Ospreay’s time in IMPACT, all five shows, he had some unique outings.  There was the obvious Will Ospreay vs. Mandrews (Mark Andrews).  This was the one that started all the negativity around the relationship with Ospreay and IMPACT.  Allegedly the match was supposed to go longer but for one reason or another it didn’t.  Rockstar Spud claimed it was a timing issue.  Other rumors claim that IMPACT was unhappy with Ospreay signing with NJPW before coming in, even though he outright lied about that – and because of the lie about signing with NJPW, IMPACT jobbed Ospreay out.  The match was thought to be a dark bout, but it ended up being used for Xplosion.

Then there was the pairing of Mandrews and Ospreay against The Wolves on another episode of Xplosion.  This time the British duo took on the then IMPACT World Tag Team Champions in a title bout.  The match was unique due to The Wolves celebrating their second anniversary in IMPACT at this point.

The last match you can find on IMPACT’s YouTube channel was the King of the Mountain match for The King of the Mountain Championship.  The match featured NXT star Killian Dane (Big Damo), SmackDown star Eric Young, AEW’s Jimmy Havoc, the NWA’s Bram and NJPW’s Will Ospreay.  The bout is one of the better, mostly because of Damo, Ospreay and Havoc providing so much uniqueness to the proceedings.

Ospreay also competed in the Joker’s Wild event that was shot in parts over that week.  He tagged with Matt Hardy against Eli Drake and James Storm before going on to compete in the $100,000 battle royal main event, which he subsequently lost to Drew Galloway.

It’s an odd little weekend, that really didn’t help either perceptions along the way.  Those that were being even keel about the whole thing saw Ospreay as immature and petty with how he went about handling himself and IMPACT took a black eye from the industry because it was seen as another reason to avoid the promotion.

Luckily things are going better for both these days.  It’ll be interesting to see if Ospreay ever works again with IMPACT, and let’s be honest there’s a load of talent we’d want to see him with.  Eddie Edwards, The Rascalz, Brian Cage, The North and maybe even Tessa Blanchard for you inter-gender fans.

Regardless if Ospreay comes back – even as part of a NJPW tour – at least IMPACT and Will Ospreay will always have these five matches to re-watch.