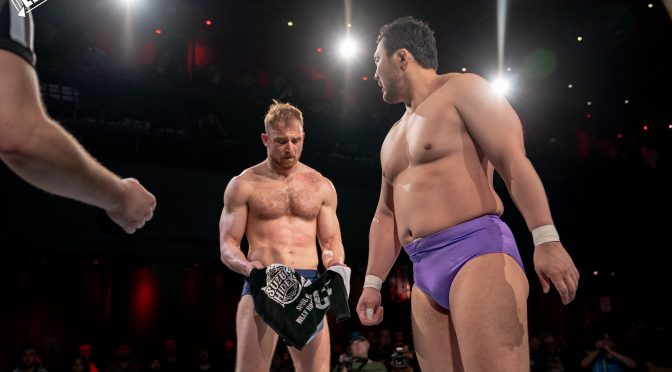 I’ve been very excited for this event all summer.  Since I heard there was a followup to the amazing show back in April happening this year, I was stoked.  I was beyond excited.

Then I saw the lineup….I became far less excited.  The talent is impeccable, don’t get me wrong and if this were a traditional indy show I’d be stoked for it.  It’s not though.  Barnett and host Game Changer Wrestling did the best they could to sell the card. A huge task as soon as Jon Moxley had to pull out of the main event with Barnett due to Moxley’s MRSA diagnosis.

All of this made for disappointing build up to me, but I was still going to give it a chance.  Yes there was no Ken Shamrock, despite the 55-year-old returning to active competition this year, but talks of a Bloodsport III with Shamrock have been floated around between the two on social media.  There is no return of Frank Mir, despite his involvement with pro wrestling becoming grander as the year goes on.  No Cain Velasquez, despite already being in the area for Sunday’s AAA show.  No Dan Severn, no Stephan Bonnar, no Phil Baroni, no real MMA influence besides Barnett.

Yes, I understand NWA Women’s Champion Allysin Kay has had a fight, and we have Japanese MMA freak show fighters, little known MMA competitors and the like, but that’s not the same.  Don’t tell me it is.

Then he announced death match stain and felon Nick Gage.  I respect a person’s right to like what the like.  I do, I’m not holding that against anyone, but death match wrestling is not just an abomination it’s flat out unconscionable. These morons inhale toxic fumes all the time due to broken light bulbs, put themselves at risk of bloodborn illnesses and in some cases nearly die in the ring for the sake of “hardcore”.

These death match wrestlers, and their subsequent fans, are zealots.  They don’t care about the health and safety of these performers, juts that their blood lust is met.  Their idol is Nick Gage.  Gage is someone for whom I never liked. I found him terrible in the ring.  He has no talent, no athleticism and nothing about him is entertaining.  My disdain for him, or rather my “dain” for him changed earlier this year.

When Gage nearly killed former WCW World Champion David Arquette and then taunted him during a show earlier this year, I resolved to never, in my life, support anything Gage does.  Even if that means I stopped watching whole shows to avoid Gage, that was my goal.  Gage’s lack of respect and concern for another human being isn’t something to applaud.  It’s disgusting.

I won’t support him.  I won’t.  I’m so disappointed that this show was so ruined by the addition of Gage.  I don’t care if GCW’s owner Brett Lauderdale is best friends with Gage or not, I refuse to watch.  I refuse to spend my money on someone who has no business being in the business I love so much.

To the roster of Bloodsport II, kill it tonight.

I just won’t be watching when you do.