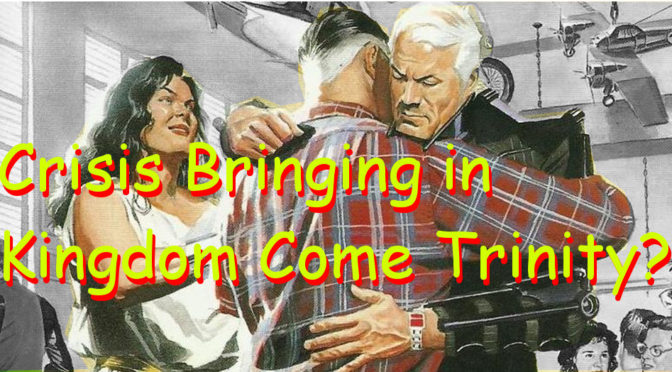 Kevin Conroy will be taking part in the upcoming Crisis crossover event on the The CW.  The former voice of Batman in the Animated Series will finally play a live action version of Bruce Wayne/Batman from the future in the event.

Other names rumored to be included are Tom Welling as Clark Kent/Superman and Lynda Carter who played Wonder Woman in the 1970’s.  The event will also include Burt Ward of the 1960’s Batman series (he played Robin), and Black Lighting of the Black Lighting series.

Brandon Routh, who also stars on Legends of Tomorrow as Ray Palmer/The Atom will reprise his turn as Superman from Superman Returns.  The series will retcon Routh’s turn as Superman as the beginning of the Kingdom Come story arch.  Routh will play the Kingdom Come Superman in the crossover, a character driven into seclusion by younger and more violent heroes who’s actions have destroyed Superman’s faith in humanity.

To see the three form the first Arrowverse version of the Trinity on screen would be historic and amazing.  Especially considering the crossover even will be Stephen Amell’s last go as Oliver Queen/Green Arrow.

Fans are clamoring for several characters to appear in the series that have had turns already, namely Tom Welling’s Superman, Michael Rosenbaum’s Lex Luthor and Justin Hartley’s Green Arrow.  We already know the Monitor will revive the Jon Cryer- Lex Luthor from Supergirl, so seeing Cryer and Rosenbaum’s Luthors standing face to face would be a truly lasting image.

We already know we’re getting two supermen as well, as the Arrowverse’s Tyler Hoechlin will be reprising his turn as Superman as well.  So we know multiple characters can and will show up, so it’s not out of the realm of possibility that we get all of these crossovers and more.  What’ll be interesting is if we get more references to past shows or more comic inspired debuts.

As far as Carter and Conroy, it’s not clear who they’re playing.  We know Conroy will be a Bruce Wayne from the future, which has also lead many to suspect he’s playing the Batman Beyond version of the character.  Carter, likewise, hasn’t had her role revealed yet but has appeared on Supergirl as the President (…because of course).  However the President was revealed to be an alien, so it’s always possible that they stole the visage from the actual Wonder Woman in that universe.

I’m jacked for the crossover and the series is expected to bring in at least three times the normal amount of viewers.  Meaning that if they hit it out of the park, then fans might stick around.  I’ll address ten things the Universe can change with this crossover if they want to bring fans back to the franchises.