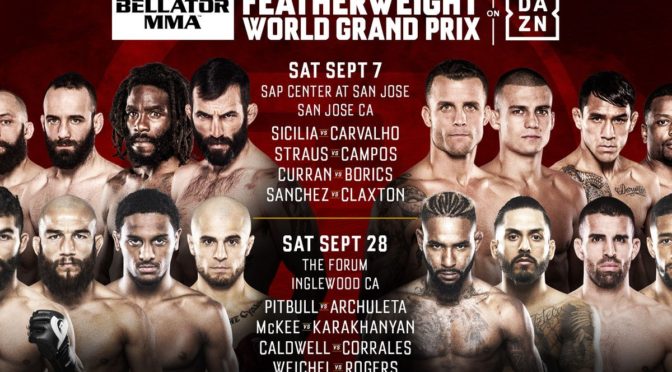 The first round will all be three rounds, except for Freire’s, who will defend his title in a five-round title match.  The second round will feature every bout being five rounds.  The second and third rounds will not be picked through a conventional tournament bracket method, where you fight the next guy on the bracket.  Instead it’ll be a random draw.  So the eight fighters who win will have their luck tested as they could be matched up against anyone before the finals.

The first round fights will take place on September 7th and 8th in San Jose, and Inglewood, California respectively.

Here’s the cards for both and my predictions;

Sam Sicilia (16-9) vs. Pedro Carvalho (10-3)
– Neither man is all that dominant or well known.  Sicilia though is getting caught more often than not, as three of his last four losses have all been by stoppage.  While Carvalho is on a five fight win streak, with 3 stoppages to his name.  I have Carvalho going over ending the bout with a submission.

Daniel Straus (26-8) vs. Derek Campos (19-9)
– Both fighters have been struggling to find their mark, with Campos losing three straight and Straus going 1-2 in his last three. Campos has the size advantage, coming down from lightweight. I expect him to use his muscle and mass to get Straus on the ground and flood him with elbows and strikes in a three round decision.

Pat Curran (23-8) vs. Adam Borics (13-0)
– Pat Curran is Bellator MMA royalty.  While Adam Borics is a stoppage machine, recording a stoppage in every one of his four Bellator wins, one against highly touted prospect Aaron Pico (a TKO).  Curran is going to seek to get his shots in, and get the points, while Borics will probably be overly confident in his finishing skills. I would be surprised if Curran didn’t take Borics apart for three rounds.

Emmanuel Sanchez (18-4) vs. Tywan Claxton (5-0)
– Sanchez is a Curran-Clone, get the decision, out strike a guy.  Claxton in his five pro fights (all wins) has only one decision victory.  He’s got knockout power, but Sanchez has never been finished.  He’s got a tough chin.  Like with Borics, I think Claxton gets taken to the third round and loses on points.

Champ Patricio Freire (29-4) vs. Juan Archuleta (23-1)
– Usually I’d favor Freire here, he’s the champ and dominant to boot. Yet, Juan Archuleta is scary.  He can literally beat you every way imaginable.  I think Archuleta gets the win here and takes the belt.  Either way, I don’t have Freire winning the Grand Prix anyway, especially if he meets Curran in the finals.  So we’re crowning Archuleta as champ.

A.J. McKee (14-0) vs. Georgi Karakhanyan (28-9-1, 1 NC)
– When you out-point Pat Curran, you’re something to remember.  AJ McKee is every bit the striker you think he is.  Karakhayan has a lot of fights, but the last few years hasn’t been that impressive.  McKee gets the early win.

Darrion Caldwell (12-3) vs. Henry Corrales (17-3)
– I’m gonig back and forth on this but I can’t make a pick I’m comfortable with.  Corrales is on a streak recently, and Caldwell’s two back to back losses were to the world’s best Bantamweight.  I think Caldwell might be stuck at the moment, so I’ll give this begrudgingly to Corrales by decision.

Daniel Weichel (39-11) vs. Saul Rogers (13-2)
– Rogers is getting his big break in this tournament but he’s doing it against a hardened vet in Weichel.  While I’m excited for Rogers future, I think Weichel out earns that decision victory.

As for the Rory MacDonald and Douglas Lima rematch?  I think Lima’s on fire, but don’t bet against Rory MacDonald.  He’s winning this tournament at any cost, especially after that lackluster draw against Jon Fitch.  MacDonald wins, and takes his seat next to Ryan Bader as the face of Bellator.