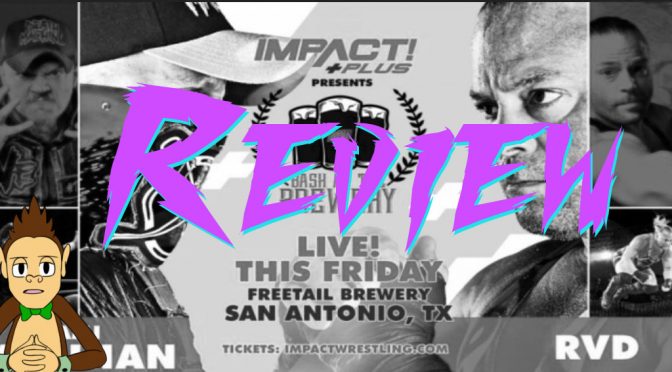 This is the start of the Texas Trio of shows, starting in San Antonio, before going to Houston tomorrow for Deep IMPACT with Booker T, and then on Sunday with Slammiversary XVII in Dallas, Texas.  The building is said to be very hot, and is being held in the Freetail Brewery.

It’s an awesome little setup and a legit sellout.  According to Don Callis, Rob Van Dam’s girlfriend wrestled on the pre-show via Twitch.  I didn’t know there was a pre-show on Twitch, so…yeah.

Match #1
Matthew Palmer, Stevo Reno and Andy Dalton vs. The Rascalz
– Stevo Reno had the Green Lantern symbol on his tights, so score for that.  The Rascalz won pretty easily in what was nothing more than a glorified squash.  None of the local talents looked all that impressive and would at best be enhancement talent on a bigger stage.
Winners: The Rascalz
Grade: C-

Eddie Edwards Promo
– Eddie cut a solid promo on Big Mike, telling him that he may be unbreakable but he’s not unbeatable.

Brian Cage/Moose/Elgin Segment
– Brian Cage comes out to cut a promo but is interrupted by Moose. As Moose is running down Cage, Michael Elgin runs in and attacks Cage with a steel chair.  The crowd volume is low for the entirety of the show but you can audibly  hear how much louder they get when Elgin begins to brutally attack Cage.  Elgin takes Cage out with several dozen chair shots to the back and comes back for more just to hit Cages’ back with forearm shots.  Referees, security and officials try to stop Elgin.  Cage is later ‘taken away’ to a hospital.  It’s then announced in a backstage segment with Moose and Elgin that it’ll now be Elgin taking on Eddie Edwards and Moose for Elgin’s Number #1 Contendership at Slammiversary XVII.

Match #3
Jessicka Havok vs. Jordynne Grace
– This match was actually really good.  Grace had to play the underdog but still used her move set well, while Havoc used her size and length to use a unique power offense against Grace.  Match was clicking until Su Yung, who was with Havok when she entered the match, attacked Grace.  Rosemary runs in and makes the save before pulling a Teddy Long and making the match a tag team match, Playa!
Winner: I think Grace?
Grade: C+

Match #4
Jessicka Havok/Su Yung vs. Rosemary/Jordynne Grace
– Not as good as the singles match and I question the decision to even have this tag match.  I know Yung isn’t the greatest of workers, but that’s exactly why you don’t give up a good match for a not-so-good match.  This match missed the mark.
Winners: Rosemary/Grace
Grade: D

Match #5
Willie Mack/Rich Swann/Tessa Blanchard vs. oVe
– Tessa Blanchard was the star of the match, going up against all members of oVe at some point, even Sawyer Fulton.  Mack was lost in the shuffle, but Swann did get some love on commentary about his “life-long” feud with oVe and his Slammiversary match.  Eventually the match came down to Jake Crist and Tessa.  She again pins Jake, who commentary put over as the ‘leader of oVe when Sami Callihan’ isn’t around.
Winners: Tessa/Mack/Swann
Grade: C+

Match #6
Eddie Edwards vs. Moose vs. Elgin
– Eddie Edwards and Moose are fantastic, but unfortunately we had to deal with Elgin being in the match.  Despite Elgin admitting on camera of committing sexual assault, we’ll cover this as neutrally as possible.  Elgin had Moose up in a vertical suplex for nearly half-a-minute.  Moose kick-ups just after Elgin hits it.  Despite Eddies and Moose’s rivalry, they rarely got any time to themselves, as Elgin was seemingly in every moment of the match.  No change to Slammiversary’s main event.
Winner: Elgin
Grade: C

Match #7
World Tag Team Title Match
The North vs. LAX (c)
– This was a great match.  LAX was attempting to wrestle The North’s style all match long, something Josh put over on commentary.  He points out that LAX only lose when they do just that or if Konnan wasn’t there.  Konnan wans’t there by the way.  Josh  then puts over the fact that there’s never been a title change on the IMPACTPlus app or one of these monthly specials.  Gee, I wonder what’ll happen.  No surprise, The North get the win after a title shot to the face.
Winners: The North
Grade: B-

Match #8
Sami Callihan vs. Rob Van Dam
– Not much to write home about here. With both men having big matches at Slammiversary, neither man could really afford a loss.  The other head scratching thing was that despite both men’s reputation for brutality and hardcore offerings, Rob Van Dam and Callihan did next to nothing in the match.  Jake Crist runs down and gets stopped by Tessa Blanchard, who helps RVD out.  RVD gets control of a chair, Five Star Frog Splash later, and RVD wins.
Winner: RVD
Grade: C

Overall Thoughts
– The show itself was a fine outing.  We got the announcement that The North will defend their newly won tag team titles at Slammiversary XVII against LAX And The Rascalz, so that’ll be interesting to say the least. The crowd was a bit muted due to a lack of mics.  I’m not that mad though, as the audio for the commentators, backstage promos and interviews were all great for the first time.  Jimmy Jacobs showed up as a guest interviewer in a brief RVD interview, so that was cool.  Overall a fine outing and tomorrow IMPACT has a chance to up the ante a bit with their Deep IMPACT event, co-promoted alongside Booker T and his Reality of Wrestling promotion.
Show Grade: C+