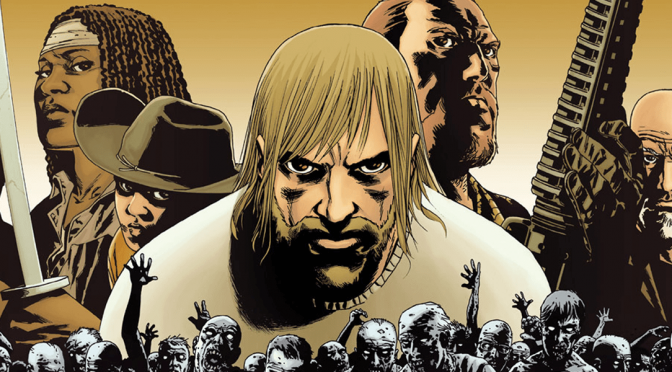 That’s right it was announced yesterday that Image Comics would be saying goodbye to Robert Kirkman’s zombie classic just one month after killing off lead character Rick Grimes.  The thing is, why is this a surprise?

Each chapter of the Walking Dead series has been given a chapter title of sorts, with some of the more notable ones being ‘Days Gone Bye’, ‘Fear the Hunters’, ‘All Out War’,  and ‘The Whisper War’.  The chapter title for the last part of the series?  ‘Rest in Peace’.

Pretty spot on, if you ask me.  The final issue will be a triple-sized issue and will #193 in the numerical cannon.  It’ll feature a near 20-year time jump from #192 and will feature an adult Carl and what life has become now that humanity has settled in decades after the rise of the dead.

There is going to be some debate, until Kirkman expands on it, about

whether or not this was the plan from the get go. Kirkman wrote in issue #192 that more as to come, and the post-Rick Grimes life of the series would be very much like the pre-Rick Grimes run.  Yet, as he now said in #193 (out today), he kept things a secret so fans didn’t know things were wrapping up.

Was this really the case?

Who knows, I certainly don’t.  The long running series that helped re-define creator owned comics in the modern area is coming to an end.  It’s a sad day, and one that’ll have fans flummoxed.   Will there be spin-off’s?  Prequels?  What about a whole new series about whole new characters?  Who knows.  We’ll just have to wait and see, and hopefully not get taken for a surprise.