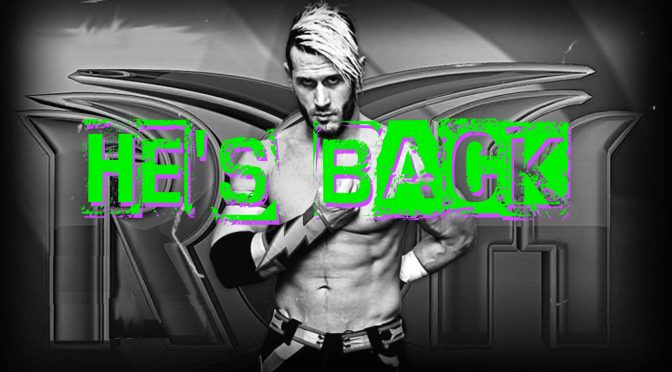 Not even a year ago, we said goodbye to the career of Alex Shelley.  Shelley posted on June 25th of 2018 that he had severe nerve damage to the maxillofacial portion of his jaw.  The injury was considered career ending due to the persistent pain he’d be in if it were to be agitated on a consistent basis.

Only I would have luck like going to school for physical therapy in order to maintain best condition possible and help my friends via manual techniques, and then have my worst injury (this year, fingers crossed) be maxillofacial nerve damage. Could always be worse.

In the end, MCMG’s final match was against @NickJacksonYB, @MattJackson13, @njpwShowT, and @njpwyohei_k. I really don’t think I could’ve asked for a better ending. Four guys I love very much who I hope I helped some over the years. Thank you, gentlemen.

So Shelley said goodbye.  Until yesterday.  The no-longer-retired wrestler returned to Ring of Honor last night in the 2300 Arena and announced his intentions of facing off with the ROH World Champion at some point following July 20th’s Manhattan Mayhem event.  The event will feature Jay Lethal vs. Matt Taven for the ROH World title in the main event (presumably).

Shelley took to Twitter after his return and announced things are going to be “weird this time around“, and considering how dynamic he is personality-wise, I have no doubt.

Shelley has long been someone who has been compared to Chris Jericho and after his retirement last year and decision to focus on his education for physical therapy, many thought Shelley would never return to the ring.  The promise of him following in Jericho’s footsteps and winning a world title vanished from the realm of possibility.

Now he’s back, and ROH is in desperate need to move off of Matt Taven.  It’s pretty obvious, though not confirmed, that ROH won’t move the title off of Taven unless the person is under a long term contract with the promotion; so this leads us to question whether or not Shelley is a candidate.  Does his contract pick back up now that he’s back? Is he back full time?  Will he re-sign with ROH once his contract expires?  How long is he back for?

There are a lot of questions we’d like the enigmatic-Michiganite to answer.  One being; what’s the long term plan for Shelley?  His best friend and career long-partner, Chris Sabin, has left ROH and is serving as an occasional producer in IMPACT Wrestling at the moment while he heals form another torn ACL.  Will Sabin and Shelley reunite in IMPACT?

Main event caliber talent is becoming scare, and Shelley and Sabin are both guys who could fill that roll for either ROH/IMPACT.  Shelley’s return is exciting and the prospect of his return netting something greater for ROH is something fans of the promotion are desperate for as they’ve clearly fallen to the 4th promotion in the U.S.

Shelley’s not ROH’s savior but he may be just what they needed.