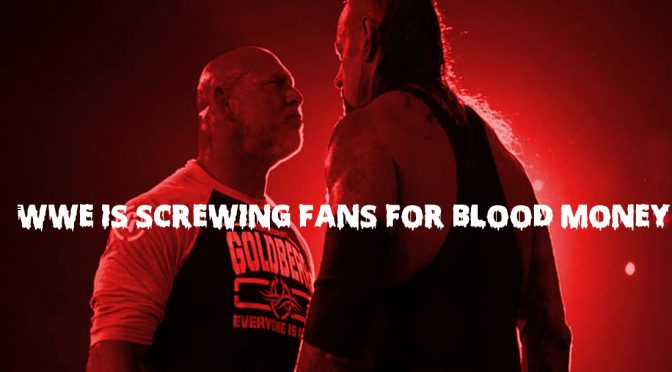 The WWE is screwing their fans.  What’s new?  If you listen to some on WhatCulture, they’ll play it off like this is a new thing.  It’s not.  It’s 15-some-odd years in the making.  Vince hates wrestling.  Vince hates you.  That’s it.  That’s all it is.

Every single initiative, or cultural cause they’ve ever embraced has been do to their bottom line, not because they believe in it.  They’re a scum bag organization.

So I’m not at all surprised that one of the greatest dream matches of all time is being fed to blood money bastards to stoke the murderous Crown Prince’s desires for wrestling.  If the WWE gave a flying fuck about their fanbase, we’d have a SummerSlam main event for the ages; even if it wasn’t the best thing ever.

Undertaker and Bill Goldberg will clash in a match everyone, but a handful of snarky fans, wants to see.  Yet most people don’t want to see it in Saudi Arabia.  They want to see it in a country where journalists aren’t murdered for revealing the truth about a regime.  The irony in that is still lingering.

Goldberg and Undertaker is twenty years in the making.  It could’ve been done at any time prior to this.  It could’ve been done just two months from now at SummerSlam.  The match would be all theatrics but if Goldberg and Brock Lesnar at Survivor Series didn’t convince you that wrestling didn’t need 50 minute main events, with eighty near falls, then  you weren’t paying attention.

The bout, much like Shawn Michaels’ return to the ring, is going to be a forgotten moment wasted on scum-sucking-murderous-pigs.  In an era where the weekly t.v. ratings are peak-TNA numbers, attendances from house shows is pathetic, and their overall ‘q-rating’ is near all time lows; why would the WWE do this?  I understand the money from the Royal Murderers is pretty deep.  I understand that it’s going to help cover up a lot of the companies deficit.

After all, the WWE is a publicly traded company and they need to always turn a profit to keep their biggest investors happy.  The Network, while a necessity, isn’t a huge winner financially.  Their rights deals outside of t.v. aren’t the home runs they once were.  Just look at how little wrestlers get from posters, DVD’s, and video games these days.  So any money in the bank that can help offset how bad things are will be gobbled up.

That doesn’t justify anything however.  In fact it further encourages the company and those within it to finally do something and get Vince McMahon out of power.  The man is pure evil, and has been accused of partaking in cover ups of sexual assault, sexual harassment, rape, murder and drug running.   While horrible, his removal would all be due to performance based.  He’s running this company for himself, and not his fans.  Which is why we’re in this mess.   While his ousting wouldn’t make Stephanie McMahon any less disingenuous in her motives, hers are all about public opinion and that’ll keep her at least accountable.

Goldberg deserves better than this.  Granted, he’s getting over two million dollars for one match, or so the rumors go, so it’s not like he’s a victim.  His legacy however will be.  Even if he were to eat a loss to Undertaker at SummerSlam, at least fans would be hyped for it.  Instead he’ll be remembered like so many others for selling a part of their soul for a big pay day.

We’ll get another ‘HBK-unretires’ moment  with Goldberg’s return and just like with Michaels – no one will ultimately care.  That’s a clear indication that Vince McMahon no longer cares about generating a product to be proud of, but generating enough content to cover the holes that are springing up all over the U.S.S. WWE.

I’ve never watched a sinking ship go down in real time.  This should be interesting.