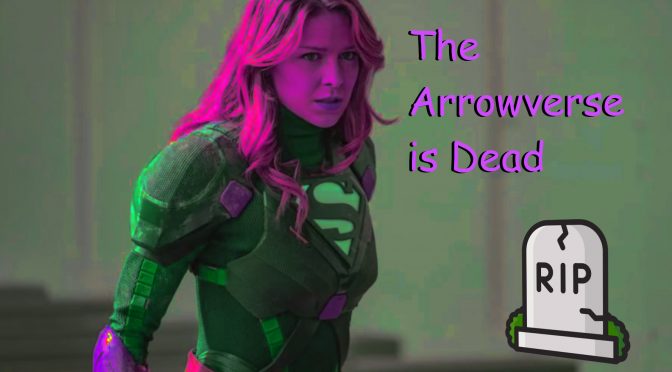 The headline is absolutely 100% baity.   Won’t ever deny it, but that doesn’t mean the point won’t still stand.  For those of you who care, and judging by ratings it’s not many, Supergirl spoilers are coming.  So be warned.

In the most recent episode of the CW drama, Supergirl crash landed in with a season finale that was meant to serve as…..I don’t know, I don’t watch.  Least not anymore.  Yet, when it was announced that Supergirl was bringing in Lex Luthor to be played by Jon Cryer I have to admit I was curious.

How would he do as a Luthor?

Well, it really doesn’t matter anymore, does it?  The damn show killed off the character.  Well, ok, Smallville killed off Lex in season eight (in earnest).  Not the worst idea, right?  Well, it is if you realize that Cryer is only credited as being in THREE episodes for the show.

The death underlines one thing that is true about the CW shows over the last few seasons; nothing fans care about matter, just as long as they can keep pandering.  The whole death of Lex was orchestrated by his sister, Lena Luthor, who shoots him dead.  If the symbolism isn’t strong here, I don’t know what to tell you.

It’s no surprise the DCCW shows are struggling, most steering hard into the social justice, pander-nomics of today’s age.  So why wouldn’t the most iconic villain of the Super-mythos, one who’s so captivating he could bring back viewers, be used as anything more than Lena Luthor’s stepping stool for next season?

If this was an isolated incident, fine.  It’s not though.  The amount of bad on these shows are overwhelming.  From each show being the literal same in it’s style and execution, to the number of unnecessary character changes for the sake of change, to the god awful plot-armor and plot-problem (things that exist to only serve the plot). It’s become clear these shows are garbage.

The funniest part is that it wasn’t that obvious for a long time.  A lot of fans, myself included, took what we got because “at least we were getting something.”  Then Titans debuted, kicked the critics in the dick, slapped “Fuck Batman!” on everyone’ forehead and called it a day.  Then Doom Patrol kicked us in our asses, and yelled “WHAT THE FUCK” as they high-fived Titans.

When we saw what quality was, we started to realize just how much crap we’ve been fed.  That’s not to say that there aren’t great aspects about the Arrowverse.  Season’s one, two and five are phenomenal pieces of work for Arrow, and Flash and Legend’s of Tomorrow started off so well.  Ever since though each show has followed the same formula, pandered to one audience, and drove people away.

Now you’re introducing a borderline (at best) sexist Batwoman character and you think fans aren’t going to spit in it’s proverbial face?  The Arrowverse has outlived it’s life cycle.  The crossover for the fall, Crisis on Infinite Earth’s, should be the universes swan song.  We’ve gotten to a point where these shows are more of the same and offer little in the way of uniqueness.  This is 100% on Greg Berlanti and co. for making the same show five times.

It’s also an even bigger issue that they still refuse to use some of their biggest franchise players.  It’s not like DC cares about airing shows and movies with the same characters anymore.  Batman was in several films while his prequel series existed.  Don’t tell me we couldn’t finally get a proper Batman series.

At this rate the former Arrowverse shows are going to be steeped in  misandry-laden comments about how women are perfect and men are stupid dumb animals.  Why would any fanbase want to support such toxic drivel?

Naw, instead I’m going to stick with the DC Universe.  The first three shows – Young Justice season three and the first seasons of Titans and Doom Patrol – were all phenomenal.   Comic accurate costumes, sensibly written story lines.  Different style of story telling.  It’s truly a universe unto itself.

As far as the next seasons go, we won’t be covering it on ComicCorp anymore.  We’ll cover the Crisis event, but other than that we’re out.  We’ve been dogged so long that we can’t take anymore of it.

To paraphrase Twisted Sister, we’re not going to take their terrible shows anymore.