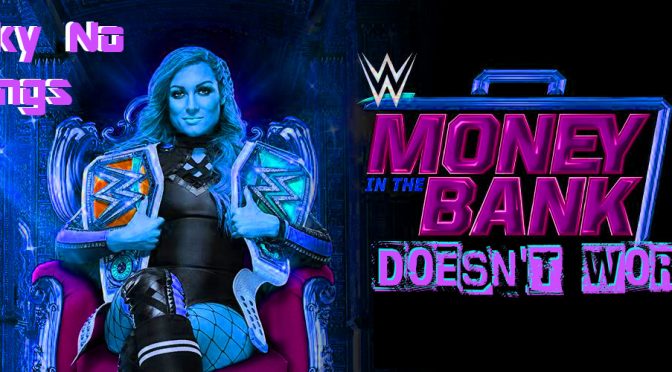 For some reason fans love Money in the Bank and the contracts within. The matches are usually highly anticipated and the Cash In’s of said contracts illicit huge reactions.  Yet, when we look at the end results of the briefcase victories there’s one thing that is undeniable; the concept doesn’t make stars.  In fact, at times the very concept designed to generate excitement and get talent over often hinders talent.

Yes, some fans will point to Edge, CM Punk and Daniel Bryan as “success” stories, but are they?  Edge was earmarked for superstardom three years before he ever won the briefcase for the first time, Punk was already one of the most popular wrestlers when he won the briefcase and Bryan was seen by many fans as “misused” prior to winning, and yet still after winning.  In fact Bryan wouldn’t really get “over-over” until 2014 when the fans willed him to be.

In 2005, Edge won the inaugural briefcase and would cash in nearly a year later at New Years Revolution 2006.  Vince McMahon would come out at the end of the Elimination Chamber match  that saw John Cena retain his WWE Championship.  McMahon then introduced Edge who cashed in and ended Cena’s firs title reign in dramatic fashion. Edge however would drop the belt three weeks later and would never truly ascend to the same top spot that Cena was at.  He’d be used more often to replace injured champions than anything else.; like in 2007 when Edge took the briefcase from Mr. Kennedy and the title from The Undertaker.

When we get to 2006, Rob Van Dam won the briefcase, and defeated John Cena in a scheduled match at One Night Only 2006.  RVD would then be gifted the ECW Heavyweight Championship that following Tuesday before being stripped of both brand championships several weeks later due to a drug arrest.  He’d never hold another WWE championship.

CM Punk was the only back-to-back winner of the Money in the Briefcase match, and both subsequent title reigns were disasters.  Punk would defeat Edge on RAW but wouldn’t even main event a pay per view during his first run.  He’d have his first title run end badly when Randy Orton and his lackeys attack Punk prior to his Unforgiven 2008 scramble match.  Chris Jericho replaced a now injured Punk in the main event and Punk would be relegated to mid-carder after.

In 2009, Punk would find himself in even a worse way.  Punk would defeat Jeff Hardy for the belt, and turn heel in the summer.  Yet, when he finally earned a main event spot on SmackDown as a heel, he’d piss off the wrong backstage personality and get jobbed out to The Undertaker.  His Straight Edge Society stable that came around at the same time would be derailed and left for dead, giving them nothing to do long term.  Punk would recover, but it was due to his Pipebomb promo and not because of the MITB Briefcase.

The 2010 Money in the Bank match in hindsight was filled with nothing but mid-carders.   Maybe Dolph Ziggler and MVP would of been able to utilize the opportunity but that’s anyone’s guess.  Jack Swagger ended up winning, and was forced to go around cutting the worst promos of the year.  Swagger would cash in on a wounded Jericho, before dropping it a few months later to Rey Mysterio.  Swagger would never be elevated by the title win, and would be relegated to mid carder after his loss.

In 2010 we had two more winners for each brand.  Kane won the SmackDown MITB briefcase and would go on to have one of the better cash in’s and subsequent runs with a title in MITB history.  Kane won his first world title in over 12 years, and feuded with his brother Undertaker in one of ‘Takers last good full-time feuds.

The Miz won the RAW MITB briefcase, and would defeat Randy Orton for the belt.  Miz would even headline WrestleMania as champion, though at no point did his title run elevate him to a higher status; and he was even overlooked in his main event match for The Rock, who was at ringside.  Miz has yet to win a second world title.

In 2011, Daniel Bryan won SmackDown’s MITB briefcase and arguable did more damage to the top of SmackDown’s card with his cash-in angle.  At the time Mark Henry was on a hot streak and wrestling fans were excited for him as World Champion; a thing most thought would never happen.  Big Show would enter a feud with Henry and ended up stopping Henry in a ludicrous ‘Chairs Match’ at the 2011 TLC event.  Afterwards, Bryan cashed in on Show and won his first world title as a cowardly heel.  Ignore the thought of Bryan, one of the companies most liked wrestlers turning heel only because Vince didn’t like him, and focus on the damage left to Show and Henry.  Henry was finally over as a heel champion, and a feud with a face Bryan would of been money by all accounts.  Instead all three talents, Show included, would look foolish throughout the turn of the year.  WWE booking didn’t help Bryan any either by having him loose in mere seconds to Sheamus at WrestleMania.

On the RAW side of things in 2011, Alberto Del Rio won the briefcase.  He was already treading water at best at this point, having not connected with the WWE audience prior to his win. His cash in win over CM Punk at that year’s SummerSlam smacked of ignorance from Vince McMahon and fans rejected it. Punk was finally over as a star, and instead of giving him a chance to really spread his wings, Del Rio gets a cheap title win that does nothing for his credibility, before dropping it back to Punk a few months later.  Del Rio would never rebound.

In 2012, the brand split was basically dead and the briefcases became assigned to the championships instead.  Dolph Ziggler won the World Championship briefcase, and would defeat Del Rio for the title on RAW after WrestleMania.  Ziggler would be sidelined with a concussion a few weeks after he won, forcing him to drop the belt.  He’d never recover his pre-cash-in momentum.

John Cena became the largest name in stature to win a MITB ladder match, by capturing the WWE Championship briefcase.  Cena would then go on to become the first competitor to not successfully cash in, after he challenged CM Punk on the 1000th episode of RAW.  Big Show ran in and cost Cena the title.  Not only did this do nothing for either wrestler, it made Punk look weak for not being able to beat the aging Cena.

Randy Orton won the WWE Championship Briefcase next in 2013 and would actually be given arguably the best overall arch.  He’d beat Daniel Bryan at SummerSlam and hold it til WrestleMania where he lost it in a triple threat back to Bryan.  That being said, Orton’s reign was marred with lackluster writing, bored fans and the whole fact his involvement in the angles caused fans to demand the insertion of Bryan into the WrestleMania main event.

Damian Sandow won the World Championship Briefcase but did dick-all with it, becoming the first person to lose the title match.  It’s made even worse when you realize Sandow was over with the crowd, and was fed to John Cena unnecessarily.  Sandow would never recover.

In 2014 we’re back to just one winner, with Seth Rollins getting the shot.  Rollins though was already a former World Champion coming into the WWE in 2010, so it wasn’t like winning the MITB briefcase was going to elevate him that much.  He was already on a higher level than most people when he entered the company.  Not too mention that his post-cash-in run was marred with reckless matches throughout the back half of it.  He nearly killed Cena with an overzealous knee, ended Sting’s career with a poorly placed buckle-bomb and then blew out his own knee trying to powerbomb Kane off of the middle rope.

Sheamus won it in 2015 after he already established his name value; which was far from being a legitimate star.  He’d beat Roman Reigns for the Championship but dropped it right back to Reigns just weeks later.

When the brand split returned in 2016, there was still only one briefcase for the men, and it went to Dean Ambrose.  Ambrose was poised to actually benefit off of the briefcase win, but would drop the belt to AJ Styles just two months later.  His post title win booking was so bad that Ambrose would leave the company over his unhappiness with his position.

The 2017 and 2018 men’s winners would end up being the worst yet.  Baron Corbin, the 2017 winner wasn’t even over when he won the briefcase, couldn’t gain traction after winning and got jobbed out to Jinder Mahal on SmackDown. Corbin hasn’t done anything to get over with fans since, and most don’t think he will.

Brawn Strowman won it in 2018, and had his match end in a no contest.  In a Hell in a Cell match.  How does that make sense?  Strowman never regained his momentum either and has been relegated to the mid card, where his audience reactions get less and less noticeable every week.

The first women’s winner, Carmella in 2017, had to win the Briefcase twice.  The first was so poorly booked fans revolted and made the company redo the match.  Carmella would win the SmackDown Women’s Championship two nights after WrestleMania 34 but fans were so disinterested in her that she never got over.  She’s now in a mid-card dance team with Ron Killings.

Alexa Bliss won and cashed in her shot on RAW’s Women Champion Nia Jax.  She only won the belt to put over Rousey two months later, which is coupled with the fact that she was already “established” prior to winning the briefcase.

If there is ever a more dead concept than Money in the Bank, I’d like to see it.  The whole fact it exists shows you the biggest gripe with the WWE’s current product.  They can’t generate excitement through organic story telling, so they created a cheap narrative device to do it for them.

If the booking was better, the need for the Money in the Bank wouldn’t be needed.  It’s a crutch that stifles the believablility and viability of wrestlers.  Fans subconsciously know when a wrestler isn’t seen as “good enough”.  Having to cheat to win a title only reinforces the narrative that this person isn’t good enough to win the championship.   That harms the perception of the talent and there in lies the biggest issue; that this whole idea is supposed to help wrestlers get over, not hurt their chances.

It’s time to retire the concept.