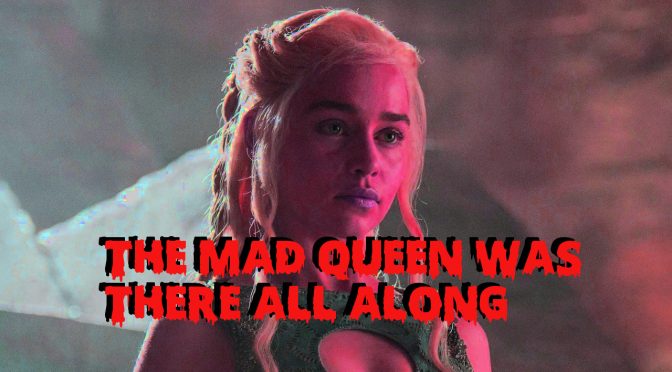 The eighth and final season of Game of Thrones is as bad as a final season can be.  While a lot of people are comparing it to Dexter’s last season, I never saw the series so I don’t know if it’s a fair comparison.   What I do know is that a bad last season cripples a show, for instance How I Met Your Mother.  The final season for How I Met Your Mother was as bad and underwhelming as they come.  The entire story was thrown out for a cheap final season gimmick and final episode ‘subversion of expectation’ (Note: Subversion of Expectation should always be seen as an insult to fans who expected a payoffs.)

This is a long winded way of saying that Game of Thrones‘ last few seasons has had its issues.  However, the one that isn’t an issue is the turn of Daenerys Targaryen.  Yes, the final turn has been so badly done, but that doesn’t mean it was unexpected.  It’s been expected.  It’s been hinted at through quotes, actions and even visions.

While in story there are plenty of examples of her behavior being problematic, what I want to look at is more the decisions she makes and why they matter.  The argument for her being a ‘hero’ is that she always did bad things to bad people.  How can you defend slave traders?  You can’t, they’re evil people.

Yet, this is where the crux lies.  No one will defend slavers, and rapists.  No one will say she wasn’t justified in her believing she needed to crush her enemies to advance her ideals.  What people should question is her actions in getting there.

Fans have become very ignorant to many things, mostly the treatment others.  In a generation where the idea of empathy is dead it seems, it’s no surprise fans will see the actions of Daenerys and not see the cruelty in her actions.  Let’s flash back to season one where Ned Stark speaks to Bran about the idea of executions and why Ned is the one to swing the sword;

…we hold to the belief that the man who passes the sentence should swing the sword. If you would take a man’s life, you owe it to him to look into his eyes and hear his final words. And if you cannot bear to do that, then perhaps the man does not deserve to die.

This is a juxtaposition to Daenerys, who constantly has others metaphorically swing her sword for her.  The most obvious example of this is when she uses her dragons to kill people she feels have betrayed her, wronged her, or just stood in her way.  If Ned is seen as the definition of honorable in the series (and he is), then this is an example of a leader being far from honorable.

Yet, this isn’t even the worst of Daenerys’ cruelty.  In season four, Daenerys crucified 163 slavers in retaliation for the 163 children who met the same fate.   No doubt the death of a child deserves justice.  Yet, what is justice?  Meeting someone on their terms for the purpose of satisfying your anger?  To be a goodly, and merciful ruler as people constantly claimed her to be, one cannot be cruel.  To lower oneself to the pits of your enemies is to prove yourself no better.  To die by crucifixion is an awful and barbaric way to go.  To order it proves you’re no better than those who used it.

You can’t be heroic if you’re barbaric.   Yes, slavers  should be punished, but should they be punished with their own crimes?   These crimes are viewed as terrible for a reason, and Daenerys has no problem resorting to them.

Keep in mind that Daenerys herself is barely better than a slave trader.   She has taken dominion over the Dothraki, the people of Meereen, The North and now Kings Landing.   She has burned people alive for not giving their freedom to her.  She may not be called a slaver, but when she demands you submit or die; how is she better?

Clearly her punishment and motivations are highly suspect but that’s not all.  Let’s look at her desire to burn the opposition alive.  You ever burn your tongue on hot soup?  Notice how a liquid at barely over one hundred degrees Celsius can cause a prolonged injury?  It hurts for days, and it’s not even that bad of a burn.  Now imagine being engulfed by flames as someone watches you die, slowly, as you’re cooked from the outside in.  People with third degree burns are often kept in medically induced comas for a reason; because the pain they’d be in otherwise is so severe, they’d do nothing but scream.  Burn wards are often the most depressing and hardest to work in for hospital workers, due to the consistent cries of agony.

Why would someone so aware of what fire can do, be so quick to induce such a cruel ending with it?  The show does a bad job of highlighting this a lot of time, but those burned by Daenerys’ dragons are often still alive after the beasts are done spewing their flames.  She leaves people to suffer and die in agony.  She’s cruel in how she treats her enemies, which directly shows you how little empathy she has.  Why would any sane person want to listen to the screams and cries from another person; no matter how cruel they were?

That’s not even the worst of it.  The worst is how she administered justice to a rape victim.  Khal Drogo allowed his Dothraki to rape any woman they want when a village was razed.  Yet, when Daenerys showed up she put an end to this.  An end yes, but no one was made to pay.  There was no justice for the actions of the Dothraki.  At the very least, the one who allowed such a barbaric tactic (Drogo) wasn’t held responsible by Daenerys.  So when Mirri Maz Duur was asked to tend the wounds of the man who allowed her to be raped, she makes sure that Drogo ultimately dies.  When Daenerys finds out that Mirri killed Drogo, she had Mirri burned alive.

Why though?  Daenerys didn’t give her justice, just another form of what she was forced to endure.  To serve her or die.  That’s not freedom, that’s slavery.  Mirri wasn’t given justice.  She wasn’t given recompense.  So she took it.  Isn’t that what Daenerys does?  Taking justice without concern for others?  For concerns of those directly affected?

Daenerys killed a rape victim slowly, because she was angry. Because she couldn’t and wouldn’t hold those responsible for it accountable.  If she’s willing to overlook justice for rape victims, why should we believe she’s a true hero? She only punishes those for optics.  She only punishes her enemies to better enforce her position as a ruler.  She’s not honorable or just.  She doesn’t think about the right and fair, only about might and fury.

Jon Snow impaled one of his own Northern men in the siege of Kings Landing for attempting to violate a woman, yet Daenerys couldn’t even give a single rape victim justice for what was done to her, just a promise it’d never happen again.  I’m sure that really helped her heal.  Next time you tell yourself ‘Daenerys was a hero and her turn was unexpected’ remember how she treats those she subjugates.  With cruelty, injustice and a bit of madness.