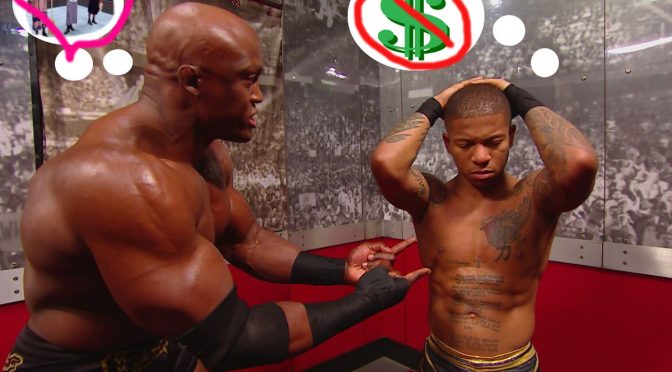 Lio Rush is risking his WWE career by speaking out on Twitter about issues he’s facing while working for the worlds leading company in pro wrestling.  For those who don’t know, Rush went on Twitter a few days back, and talked about the rumors surrounding him and his status in the WWE.

Among the rumors, Rush had a “blowup” with Finn Balor, had been “running” his mouth about how “over” he was, and was refusing to carry water for the veterans.  He’s gone on the record denying several of these reports before going on to lend credence to the water-carrying rumors.

On one hand, Rush isn’t alone in the fact that others had to carry water before.  Racial perception aside, if you want equality no one is exempt from things; no matter the optics.  However, I hate hazing to begin with, and I hate it even more when we’re talking about professionals who have been getting paid for years prior to their WWE-stints.  There isn’t a real “rookie” among the WWE’s wrestlers anymore.  Just about everyone but a small percentage of WWE Performance Center trainees have years of wrestling experience.  Even “WWE-homegrown” stars like The Miz, Velveteen Dream and Sasha Banks were on the indies before signing with the WWE.

Yet, all of those rumors are essentially pointless because Rush brought up far more damning issues.  Rush claimed that he’s barely making any money on the WWE’s main roster, and isn’t even seeing any royalties for his catchphrases for merchandise that Lashley wears, which carries Rush’s slogans and sayings.  This is something that I’ve been saying for years, the WWE pay is ludicrously overvalued by fans.

Firstly, Triple H said the average salary for NXT talent is $50,000 to $150,000.  This is accurate, to a point.  Shinsuke Nakamura, Bobby Roode, Samoa Joe and a few others were all making around  $150,000 in NXT.  The other 90% were making about $50k-75k.  I won’t name names, but I can say for sure that one recent NXT call up was making just over $60k and was doing a lot of insane spots for the developmental brand.  This wrestler was also making about four times less in NXT than they were on the indies.   It should also be noted that most NXT talent who were in the $50,000 range weren’t even making that; as the 50k range was what a talent would make if they worked every show.  Most talent in NXT don’t work every show.

Secondly, most WWE main roster talent are making around $200,000 give or take.  The idea that the WWE is paying a lot of money to a lot of talent is a joke.  Sure, some guys are getting huge offers, but they’re as few and far between as they come. $200,000 may seem like a lot, except WWE talent pay for everything.  They pay for hotels, rental cars, gear, gym memberships, health insurance, and other stuff that the WWE doesn’t cover.  When you factor in as well that the “$200k” range was their max payout, and that most weren’t hitting that threshold, you can see just how fast that money vanishes.  One former Women’s Champion’s rumored take home (after taxes, bills, etc) was about $14,000.  That’s all they put away into their savings.

And finally, I talked to one ex-WWE wrestler from about 10-15 years ago who told me that modern talent were being paid LESS than they were fifteen years ago.  There’s reasons for that beyond the base pay.  The WWE is only paying wrestlers for their merch, dates wrestled and their base income, which ranges in the mid five to low five figures.  For those that don’t know what that means, the base salary is the weekly/monthly/yearly guaranteed income of the performer.  This ranges from $20,000-$1,000,000 depending on who the performer is.  Cena could go the entire year without showing up and still make seven figures.  Members of the 205Live brand however would make about $30,000 if they didn’t appear on t.v. or house shows for a year.

There were other things that went into the WWE performers salaries that no longer exist.  WWE video games are no longer the big cash cow they used to be for performers.  The games used to bring in five figures on average for workers.  Now, that number is drastically down.  DVD sales were also a huge piece of a talents take home.  if a wrestler made the DVD cover, and was featured in a high profile match, they could make huge money for those sales.  Let’s not forget about the pay per view sales.  Top stars used to make six figures (if not more) on pay per view sales depending on their place on the roster.

All of those revenue streams are gone.

Not juts that, but Superstar Billy Graham recently posted how much he’s making on royalties form the WWE, which came out to about $80.00+ a check.  What’s worse is that most wrestlers under Legends deals, which Graham is, have limited appearance access outside of the WWE.  Now Graham is also apparently paying off an advance on his contract, but that’s for his medical care, something the WWE should be paying for anyway.

I’m not sure what the WWE’s policy is now a days for royalties, but if I was the WWE, I’d start issuing hundreds, if not thousands of shares of the company to wrestlers instead of these payouts.  Because if you only get a few hundred dollars a year for the contributions of your life and career, maybe wrestlers would be better off getting part of the company to do with as they see fit.  This also gives them the opportunity to cash out on much bigger pay days if the company is doing well.  Though with recent ratings, ticket sales, merchandising and other ad revenues down, that may not be the best idea right now.

When you think about the WWE tacking on extra time onto contracts out of spite, wrestlers like Randy Orton getting away with sexual assault and harassment, and perpetual trips to the bloody sands of Saudi Arabia, then you start to see why so many wrestlers are turning down deals.

This isn’t even the worst thing. Think about these low payouts, and low revenue streams.  Talent from fifteen years ago were getting hosed, and they had 1/3 of the roster to split benefits and payouts with.  Now, the WWE has over 200 contracted wrestlers, and that’s not counting unassigned WWE developmental talent, backstage agents, writers, production or trainers and coaches.  Just 15 years ago, the WWE was sporting about 90 contracted wrestlers, three less sets of writers, directors, producers and coaches.  When the primary payout these days come from down ticket sales and the WWE network, divided across more wrestlers than ever before, and you can see the big issue isn’t just down-ratings.  It’s a lack of money coming in, and many-many more hands stretched out waiting for their share.

The WWE isn’t too big to fail.  Nothing is.  Stock markets, housing markets, automobile markets, all of them failed because they had too many expenses and too few revenue streams to make up the difference.  This is happening in the WWE at the moment.  The WWE Network is not cheap, and coupled with NXT, those are two huge, money losing ventures.

I spoke to a source with knowledge of the WWE and was told that things are stressful in the soon-to-be-Titan Towers.  They expressed a strong belief that 20-50 talent could be cut by the end of the year.  This is centered around another troubling idea; creative and producers don’t believe the ratings will go up, and will continue to decline alongside attendance and merchandise.  There was one writer who relayed to my source that the current crop of backstage talent know it’s Vince McMahon’s fault and until he’s removed from power, things will only get worse.

The WWE is in trouble, and Lio Rush is just the tip of the problems that fans have ignored for years.