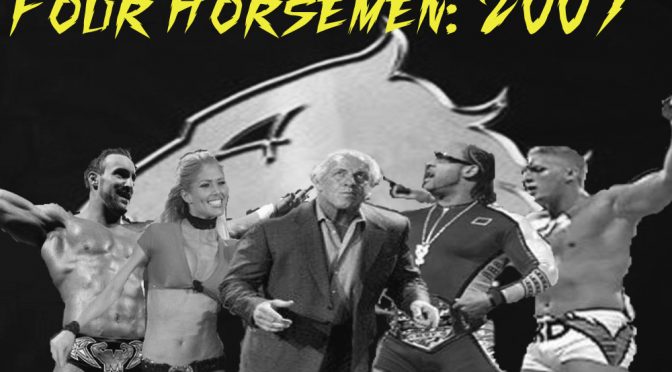 The failure of the 2007 WWE Draft cannot be put into words.  I know.  I’ve tried.  So many potential names were left in a lurch after the shakeup, and even icons like Ric Flair were quickly left off the card after a matter of weeks.

“Creative has nothing for you.”

Well, I have something for creative.  The WWE has a terrible history of ignoring iconic ideas that work for the sake of proving they’re a strong-company-that-don’t-need-no-man to support them.  Except if the current ratings are any indication, this company is as profitable as it is in spite of the creative visions of the promotion.

So I’m taking over the reigns of SmackDown post-WWE Draft . The brand lost Mr. Kennedy, Paul London and Brian Kendrick, Booker T and Sharmell, as well as The Miz. Lot of potential big names and truly big names gone, for no good reason.

In their stead the brand got Chris Masters, Kenny Dykstra, Torrie Wilson and Ric Flair; among others.  None of them would do anything worth while and most would be gone in the year.  Yet, there’s a great way to get the group over, give Flair something to do for the year before he retires and even fix a major issue within the show.

With Dykstra and Masters, the two blue-chippers were only 24 and 21 respectably.  Neither man had great charisma, but both had a look that could sell.  Masters isn’t an all time great, but with a tweak to his technique that highlights a more submission based style then he could be unique.  Could you imagine his ‘strong man’ gimmick with a submission based offense?  As far as Dykstra, just do what you were doing with him, highlighting his athleticism and dynamic skill set.

To give them that dose of pizzazz would be Torrie Wilson . She’d serve as all four men’s valet, but more a manager for the Dykstra and Masters.  The duo would be the stable’s tag team, and would instantly get into the tag title contention.  They’d easily pick off champs Deuce and Domino, and then go on a run that wouldn’t be challenged for some time.

Montel Vontavious Porter would serve as your Tully Blanchard type, with MVP being able to rock with anyone on the mic, and was known as a very physical grappler in his own right.  Especially in 2007, MVP showed he was a hell of a hand, with his well received bouts with Chris Benoit at and after WrestleMania.

Ric Flair would serve as the top guy in the stable, for at least the next 9-12 months.  His involvement is paramount due to what we need of him in the year.  During 2007, The Undertaker won and retained the World Heavyweight Championship (SmackDown’s main title) through the spring.  An injury would then turn the title over to Edge; who had defeated Mr. Kennedy for Kenney’s Money in the Bank Briefcase.  Edge then took the title off of ‘Taker, only for a spot with Kane to put Edge out of action.

This would prompt the WWE to put the title on recently transferred star The Great Khali.  This was a mistake, and it wasn’t even one you needed to wait to find out about years later thanks to perspective and hindsight. We all knew in the moment this was the bad idea.  With Triple H, Edge, Undertaker, John Cena, Mr. Kennedy, and so many others hurt, there weren’t many other options.  Hell, even Rob Van Dam had just left the promotion, so there really wasn’t anyone but Batista around to get the belt.

Now, Batista was a huge draw for the promotion back then, and was beloved by the SmackDown faithful.  Putting the belt on him though wouldn’t of done much good during this stretch either; namely due to the fact he had no one to really feud with.  Booker T had been done, and moved to RAW.  William Regal had been suspended thanks to the steroid scandal in 2007.  You still had Finlay and a returning JBL but neither man really got people excited, and JBL wouldn’t return until the end of the year, and on RAW.

A battle royal gets booked, with the same participants as originally booked but this time with Ric Flair to make the total 25 men.  Flair, Batista, Matt Hardy, MVP and The Great Khali would be the final men, with everyone dumping out Khali.  MVP tosses out Matt Hardy, before Batista clotheslines him out.  With Flair and his best friend Batista being the last two, the guys embrace to show their respect, only for Flair to knee Batista in the groin.  With the help of MVP, both men throw Batista over the top rope giving Flair the win and the title.

MVP, the United States Champion, would then align himself with Flair.  The tag team of Masters and Dykstra would defeat Deuce and Domino for the Tag Team titles and go on a year long run with the belts.  To help “elevate” the duo’s credibility, Flair and MVP recruit Torrie Wilson for the duo, and then the five are formally announced as The Four Horsemen.

This begins a program with Matt Hardy, Batista, Hardcore Holly and eventually Rey Mysterio.  One of the big decisions that I’m going to make is bringing Ted DiBiase Jr. and Cody Rhodes to the SmackDown brand in 2007.

Batista and Flair would feud throughout the summer, with Cody taking on Flair in the early fall, but in all losing efforts.  Flair and Batista would then meet again at Survivor Series but Flair would again get the win.  Rey Mysterio, the Cruiserweight Champion once again, defeats Flair in December for the title.  Mysterio and Edge then begin their feud for the World Title that’ll take them into February.

Cody Rhodes and Flair would then meet once again at WrestleMania, where Rhodes would end Flair’s career.  The retirement angle would come to fruition when Vince McMahon gives Flair a Royal Rumble spot in exchange for Flair vowing to win the Rumble, or be forced to retire with his next loss.  Flair doesn’t win the Rumble, but goes to the final four.  The final four would be Flair, Rhodes, John Cena and Triple H, with Rhodes taking himself and Flair out of the ring.  Flair would begin targeting Rhodes from here on out, building to WrestleMania.  Flair would survive numerous matches on SmackDown and at No Way Out, in order to stave his pending retirement.

Rhodes ends Flair’s career and the Horsemen are left in a lurch.  Flair though just transitions into their J.J. Dillon figure, and even introduces the world to Ted DiBiase Jr, who takes Flair’s spot in the group.  MVP then gets bumped to the main event scene, while DiBiase Jr and Cody begin feuding for the United States Championship.

So while you go into 2008 without Flair being an active wrestler, you’ve rebuilt the brand’s roster of heels with the duo and you even open yourself up to bring in guys like The Miz, John Morrison, Jack Swagger and CM Punk to SmackDown to feud with the Horsemen stable.

The stable should help raise the profile of all four Horsemen, sans Flair, as well as Matt Hardy, Cody Rhodes and Ted DiBiase when he finally debuts.  If done correctly, the brand shouldn’t lose a step with all the injuries.

Shot Through The Heart And Whos To Blame

Shot through the heart and who's to blame? - Making an IMPACT Podcast