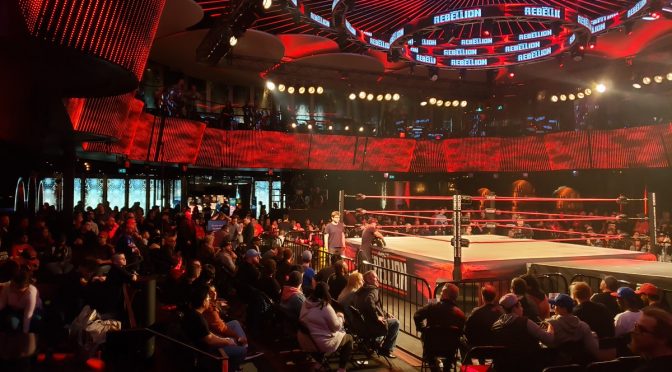 In a word, yes.  While I write the preamble, the show is still ongoing.  Yet, I have to say the show has delivered in more than just the in ring action.  The show itself feels like the next logical step for the promotion.

While they’re back in the Rebel Entertainment Complex ,they didn’t just go with the same look as Slammiversary XVI.  There were some minor changes to the stage, but the entire venue has new logos on the monitors that make the venue seem different and fresh.  The ring ropes are again red, which is a nice call back to early TNA days.

The camera angles, and hard camera are in the right place.  The venue feels tight, but the wrestlers are making it work. Fans are packed in tight but they’re lively.

It should also be noted that this is the first time since probably 2008 that a tag match main evented a PPV event.  It’s also the first time that I can think of off the top of my head that the tag titles have main evented a pay per view since the summer of 2007, when they were defended in back to back main events.

The big news coming from the show involved the end of the Global Wrestling Network.  The platform is being replaced in favor of a brand new, “built from the ground up” platform called IMPACTPlus (or IMPACT+).  It launches on May 1st and will replace the GWN.  No word yet on packages, pricing or the like but the basic idea is that the platform will be better, work better, and be more efficient than the GWN app.  The interface was specifically touted.  I’ll talk more about the GWN app as opposed to the IMPACTPlus service in a later column, but while I like the idea of the IMPACT library, I cannot lie and claim the GWN didn’t have some serious issues.

Also joining the night of announcements include Slammiversary XVII.  It’ll happen on July 7th, in Dallas, Texas.  I have to imagine it’ll be in the same venue in years past.

As far as the card goes, let’s break this down beat by beat.

Six Man Scramble
Eddie Edwards vs. Ace Austin vs. Jake Crist vs. Jake Deaner vs. Aiden Prince vs. Petey Williams
– A great opener.  The match wasn’t announced before hand, but it didn’t need to be.  Back in the early days of TNA and even at the height of WCW, not every match for a pay per view is advertised before hand.  Same thing with UFC/Bellator/MMA cards.  Unlike pro wrestling MMA bouts are all announced before hand but they aren’t marketed unless they’re the top two or three bouts on the card. Pro Wrestling used to do this but with the top four or five bouts.  IMPACT going back to this idea allows the promotion to be flexible with how they preserve match-ups.

The bout it self was amazing, with Eddie, Crist and Ace Austin looking good.  Jake Deaner was ok, and was mostly there to be the “big guy” in the X-Division match.  Petey got a good reaction but since he works backstage mostly, his big involvement is strictly to add a little something to these matches.  Aiden Prince could be a great foil for Ace Austin given time and a gimmick.  Overall a very enjoyable bout, with a fun finish.
Winner: Ace Austin.

Intergender Match
Scarlett Bordeaux w/Fallah Bahh vs. Rohit Raju w/The Desi Hit Squad
– Bordeaux and Raju had a fun little bout, with Bordeaux showing off her quickness and lucha libre training in a match that could of been an X-Division labelled bout.   Bordeaux gets the win but Raju doesn’t look bad in defeat.  The door is open for IMPACT Wrestling to bring in Mahabali Shera into the Desi Hit Squad.
Winner: Scarlett Bordeaux

Six Man Tag
The Rascalz (Dezmond Xavier, Trey Miguel, Zachary Wentz) vs. The North and Moose
–  This was the most spot-filled match on the card.  From a trio of top rope finishers ,to splashes and twists off the ramp way, to Moose catching Miguel and using him like a Wrestling Buddy across the ringside area.  The Rascalz are a great unit and really deliver with the high end intensity; a true stable to build around for the future.  Moose should be the No.1 Contender for Bound for Glory with the way he’s been. He’s in the best shape of his career, added some obvious muscle.  His character has been well defined and he knows how to play it perfectly.  This match did more to prove Moose should headline than any of his singles work.
Winners: The Northern Mooses

IMPACT Knockouts Championship
Jordynne Grace vs. Taya Valkyrie(c)
– It was a simple match but a complete one.  The entire idea was that Jordynne Grace hurt her arm early in the match, and from there Taya did everything she could do to exasperate Grace’s injury.  Grace tried a few big moves but ultimately couldn’t connect with any, and Taya was able to battle back, hit the Road to Valhalla on Grace and get the clean win.  It was really well done and made Grace look dominant, because prior to the injury Grace was in control.  Opens the door for a rematch.
Winner: and Still Knockouts Champion, Taya Valkyrie.

X-Division Championship Match – oVe Rules
Sami Callihan vs. Rich Swann (c)
– While I do like that Swann found the next-level in his character during this feud, I have to admit that Swann losing would of been for the best.  Callihan has lost feuds to LAX, Eddie Edwards, Brian Cage, Pentagon Jr. and now Swann.  If IMPACT isn’t careful, Callihan could go the way of Bray Wyatt.  Callihan needs to win gold, and he needs to win his next big feud.  Feeding him Willie Mack and Tommy Dreamer isn’t going to keep Callihan strong as a top heel

That said, the match was 100% Brutality Guaranteed.  Swann really upped his game, and despite having the yellowest mouth I’ve ever seen, looked like a million books.  Swann and Callihan even did a Lego spot which got the fans going.  Swann gets the win, and retains.   It looks like Slammiversary will be Swann vs. Ace Austin.
Winner: and Still X-Division Champion, Rich Swann.

Generation vs. Generation Singles Match
Tessa Blanchard vs. Gail Kim
– The match followed a touching moment when Tully Blanchard popped up backstage during Tessa’s interview and showed his support.  The match itself was great.  Gail Kim looked a lot better this time around, compared to her last match back in Ontario for Bound for Glory 2017.   While the match was strong ,and Kim looked good, it was Tessa’s performance that was the talking point. Not only did she show up with a great look, but she got creative in the ring . The ending was perfect, as Blanchard locked Kim in a rolling Cobra Clutch Crossface submission hold for the win.  Post match saw Tessa and her father share a moment at ringside, and after Tully told her something, Tessa went back into the ring.  She extended her hand, only for Kim to hug Tessa instead.  The two shared a very emotional, very real ‘passing-of-the-torch’ moment, and Tessa essentially turned face.  She gave the ring to Kim, who then went over to her husband, Robert Irvine to share a moment.
Winner: Tessa Blanchard

IMPACT World Heavyweight Championship w/ Lance Storm as Special Guest Referee
Brian Cage vs. Johnny Impact (c)
–  Cage dominated the opening of the match, and had control for most of it after that.  There were moments where Impact would get the upper hand, but Cage would battle back.  Taya Valkyrie was there, and tried to interfere but was met with a powerbomb.  Johnny Bravo, Impact’s lackey, even tried to count the pin at one point; after Impact kicked Storm, but Cage kicked out.  Storm came back in and leveled Bravo, before going for a DQ call.  Cage stopped Storm, and put Impact down one more time for the definitive three count.  Post match, controversial wrestler Michael Elgin made his debut and attacked Brian Cage.  This was a moment that took fans out of the show, but I think the main event brought them back.
Winner: and New World Champion, Brian Cage

IMPACT World Tag Team Championships – Full Metal Mayhem
LAX vs. Lucha Bros(c)
– There’s a rumor I’m hearing that this was the Lucha Bro’s finally match in IMPACT but I have my doubts about that.  The match was like a long car crash, followed by multiple little car crashes from the rubbernecking that followed.  There was one scary scene where Fenis attempted to put Ortiz through at able on the ramp but didn’t rotate enough and landed on the back of his neck and head.  Thankfully though he seemed ok as Pentagon was relaying to the referee what Fenix was saying before nodding his head and going back to work.

The matches finished seemed a bit rushed but considering Fenix nearly died, we can forgive that.  LAX end up getting the win to close out the night and regain their titles.  Post match the rest of the faces come out, and Konnan gets the teams together to squash the feud.
Winner: and New IMPACT World Tag Team Champions, LAX.

All in all an A- show.  I’d give it an A+ because it was practically perfect.  The only big issue was Elgin.  I’m not going to stop watching the product but I’m also not going to stop talking about the issues that surround Elgin.  He’s been accused of stalking a woman, and even had a restraining order filed against him, that was dismissed because of insufficient evidence.  There’s also a now infamous story of him sexually assaulting a woman, and forcing her to do sexual acts she didn’t want to do.  One yes does not negate multiple no’s and an emphatic statement of “stop it”.   I’m all about forgiveness and second chances, but you have to earn those.  Elgin has not just denied any wrong doing but has outright lied about the story at hand, even though Kevin Owens confirms he’s heard the story multiple times before Elgin originally told it.  So I have to hold that one against IMPACT.

Also, randomly, Taylor Wilde came out with the faces at the end of the event.  She’s fro Toronto, and they’re in Toronto, so it’s not the wildest thing to happen.  She’s also been hinting at a comeback and there had been talks of her returning to IMPACT a year or so ago, as well as having a spot in the first Mae Young Classic , but she was unable to due to an injury.

After which she said she’d entertain other ideas about returning to wrestling in a non-wrestling role, and it appears she’s found one.  She might un-retire, but that’s anyone’s guess now.