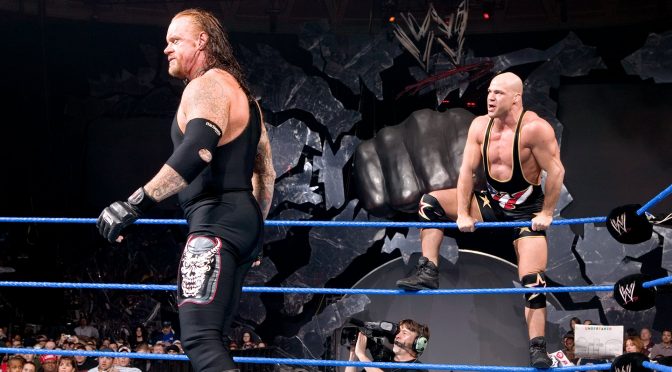 Starrcast II was going to be huge, the biggest single event for wrestling-podcasting in history.  Joining the top names from AEW, and IMPACT Wrestling include Sting, Bret Hart, Ric Flair, The Outsiders, Sean Waltman, and a whole lot of others.  Two of the bigger names were going to be The Undertaker and Kurt Angle of the WWE.  ‘Taker was in between WWE deals when he agreed to the non-WWE booking and Angle apparently had the legal go-ahead.

Conrad Thompson, who’s emerged as a  wrestling podcast Godfather these days, is in charge of the event and was interviewed by Sports Illustrated about it.  During the interview Thompson revealed that The Undertaker and Kurt Angle were pulled from the convention; though they weren’t the only contracted WWE talent to be booked for the show.  Jerry Lawler, Booker T, Bruce Prichard and Shane Helms are also set for the event and under some type of WWE contract.

He does go on to say the WWE offered new deals to Angle and ‘Taker and after they agreed, they exercised their options to withhold them from the event, as it wasn’t in the WWE’s best interest.

Conrad went on to say that Undertaker was pulled from the event, but the WWE would cover all the damages and offered a suitable replacement for the event, though the names Thompson suggested wouldn’t be appearing (Vince McMahon, Stephanie McMahon, Triple H and Shawn Michaels).  So now Conrad is in limbo with the replacement.

The announcement went wide and viral.  I was told it had gotten WWE’s attention and that Vince McMahon texted The Undertaker about the appearance. ’Taker’s representation, which is a company called Get Engaged, called to tell me, ‘WWE says he can’t do it.’ I had a friend discuss the situation with Vince McMahon, and I was assured the ‘heat’ wasn’t on me or my event but rather that The Undertaker shouldn’t be doing personal appearances outside of WWE I was assured that damages would be covered, a suitable replacement offered, or some sort of compromise to make everyone happy.

…I had an agreement in place with the talent.  Without exception, I dealt directly with the talent or their management, they set their terms, and I complied. First class travel accommodations were made and marketing was done. Now, thanks to the influence of WWE, the performers are missing out on substantial income and the fans are being punished.

So, legally, the WWE did nothing wrong.  Yet, why is this a mistake by the WWE?  Well it has to do with the WWE’s totalitarian approach to handling talent.  More and more talent want to be involved in outside ventures, and fewer and fewer are being given that opportunity.

Two major names, Johnny Impact (John Morrison) and Stu Bennett (Wade Barrett) both cited the WWE’s lack of compromise in letting them pursue acting opportunities as a reason for why they left the company.  CM Punk, among many-many other issues, also cited the WWE’s lack of desire to let him stretch his acting muscles as a reason why he was unhappy there.  Stacy Keibler, a future Hall of Famer, cited her desire to act more as a major reason why she left the WWE.  The WWE didn’t want their talent working elsewhere.

This is just a minor reason to a more widespread problem centering around the happiness of their employees.  The WWE has shown with its bloated roster that they are incapable of keeping people happy and these days there’s no excuse for that.  Wages are stagnant for a majority of the roster, the ample bonuses that used to really add to the wrestlers yearly income are nonexistent and the company continues to sign wrestlers on cheaper and cheaper deals sighting “opportunity” as the biggest selling point.

Wrestlers are also paid a bulk of their salary when they’re actually used in matches.  So if they’re sitting at home, they aren’t getting paid nearly as much as people think.  That’s money they can never get back.  Those dates are gone, and their contract is that much closer to expiring with less dates to optimize.

If guys like The Undertaker and Kurt Angle can’t get major paydays outside of the company, what makes you think that a Bayley, Finn Balor or Velveteen Dream can?  This also further compounds the fact that legally, the WWE really can’t stop people from pursuing outside work due to their status as an “independent contractor”.

I talked to a WWE talent recently and was told that the number of upset and disgruntled talent would “astound” people, to the point of disbelief.  Talent are more upset than ever, are more outspoken than ever and are aware they’ll make more money outside of the WWE for the first time in forever.

When you look at the precedent this Starrcast announcement makes, it’s pretty likely you’re only going to see more and more wrestlers become disenfranchised with the promotion, and more and more wrestlers will request their releases.  The WWE continues to show that the only time they’ll listen to their workers is when they’re threatening to quit, and even that doesn’t seem to work long term.  Just look at Sasha Banks and the Revival, three talent who have been upset for a long time.

WWE showing the talent that everyone is under their thumb will only continue to enforce the idea that they have no freedom within the WWE.  This will cause more wrestlers to want out of their deals, and fewer wrestlers will want to join the promotion the longer this draconian methodology continues.