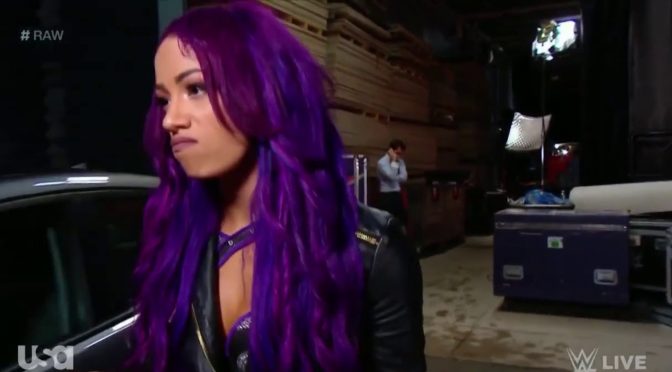 Ryan Satin posted a comment on Twitter saying he had FOUR independent sources who came to him about the Sasha Banks story.  He said this because he got buried online for posting news that made Banks look bad.  Satin, for the knob that he is, did his job.  He also did it badly.

This info is from four different sources I’ve spoken with the past day. All independent from each other and all came to me about it, not the other way around.

See here’s the thing you all need to know about pro wrestling news, or news in general.  Most of us get news directly from the subject at hand.  Josh Mathews was outed by his own stupidity as being an informant for WrestlingINC.com  So every time they get an “exclusive”, it’s from Josh.  Because he’s an idiot.

I can tell you that I’ve been given more information by talent about themselves than anyone else.  Seems pretty safe to say that the source of the story would have a pretty keen insight.  Though this is a risky move by some, as you have to trust the journalist you’re talking to.  So the other option is having friends or intermediaries  leak it for the person.

For example: Let’s say Nattie Neidhart is upset with not facing Ronda, it wouldn’t be that surprising to hear from a Teddy Hart about how pissed she is.  She’s not upset (that I’m aware), this was merely an example.

So when Ryan Satin posted his news about Sasha Banks loudly complaining about losing the title, I started thinking; this had to be WWE employees.  Not just that, this had to be OTHER WRESTLERS who snitched on Banks.

Firstly, the story about Banks and her tag partner Bayley in the hotel, right outside their door to their room?  No fan has that access, not without getting messed up.  WWE hotels aren’t usually hyper-guarded but they are at WrestleMania.  WWE security is in full effect that week, not too mention the location of the hotels are usually kept quiet.  It should also be mentioned that the WWE usually rents out the whole building, or as much as they can, to reduce the possibility of a negative fan interaction occurring.

Which brings us to the conclusion that the only people who could of been around for the hotel portion of this story are talent or co-workers.

Then there’s the locker room bit.  Who else has access to it besides a handful of female wrestlers, and female WWE agents/producers?  I doubt any, not in today’s hyper-sensitive days. So the only people who’d be able to tell anyone what happened, were again, WWE employees, more likely WWE wrestling talent.

And this is why all this matters.  Satin claims four different independent sources came to him about the story . Not the other way around.  See as reporters and journalists, we do the chasing for most of our stories.  I’ve been working on one for over a year that I can’t seem to close out, because I’m getting the run around too much.  Yet, the story hasn’t been proven to be a lie, or true, so I keep hunting.  No one is coming to me; why?  Because everyone involved so far has a little ink on their hands as far as misdeeds go.  People aren’t free to give up information because it might make them look bad by proxy, or through actual guilt.

So why are four sources running to one of the five most sourced writers on the internet?  Same reason every woman under WWE contract was on Twitter at the same exact time to attack Dave Meltzer.  Same reason why you see trusted top stars regurgitate the same old “if you want change, you have to enact it” defense of going to Saudi Arabia.  The same reasons the wagons circle around the company whenever any bad press is released; they were told to.

Whoever Satins’ contact are did what they did to change the narrative of Banks being disgruntled, to Banks being spoiled.  Yet, why?  Why change the narrative?  Satin’s getting beat up about it on his site, and Twitter, so clearly fans hate what he reported.  Banks is generally seemed as well liked backstage, most of the time.  So what’s the motivation for the “Satin Four” to come out of the wood works around the same time and release similar stories?

To change the narrative.

Satin, among others, are constantly fed False Flag stories with the intention on changing the narrative.  Sometimes these stories don’t make it to print, because we know better.  Other times they do.  This report that Satin posted feels so scummy, because it is.  These are talent, on orders from on high, sent out to tear down the credibility of Banks, and I believe it’s because she’s not on vacation to “rethink her future”,  I think it’s because she’s already quit.  This is speculation on my end, nothing more, but I believe Banks has already quit, and that Bayley getting jobbed out on RAW was because of Banks’ actions.  I believe the Satin-Stories were released because of Banks actions.  I believe the WWE is doing everything they can to tarnish Banks because she had the audacity to be upset, and quit.

Don’t think the McMahons are capable of being this awful?  Don’t forget that Stephanie McMahon was literally fucking Triple H behind the back of Chyna, Triple H’s real-life girlfriend, of years.   They didn’t just cover up the affair, they forced Chyna out of the company because of it.  There’s a reason she didn’t go into the Hall of Fame before she died, and it’s because the two of them are evil people.

Let’s not even get into why Pat Patterson was hired back after the accusations he faced during the early 90’s.   The WWE does awful things, for the worst reasons.  Hello, Saudi Arabia!

So yes, I believe Satin’s story.  Yes, I believe Satin was told by four WWE employees (one I’m told is a female wrestler).  Yes I believe this was a False Flag operation by the company to make Banks look bad on her way out.  I also believe Satin isn’t smart enough to know this, considering he tweeted this out;

No one else was able to confirm when Brock threw the Universal title at Vince after WrestleMania last year either until the footage aired on WWE 24. https://t.co/IQTW4bU0XV

Except here we have…

Wrong, was reported the week it happened https://t.co/VgcXODg23O

So Satin played into the WWE’s machine and is now shown to be a toady because of it.  Banks is being shamed for having an emotional reaction, to again getting screwed over, in the privacy of her locker room and her hotel.  And people wonder why no one takes pro wrestling seriously.