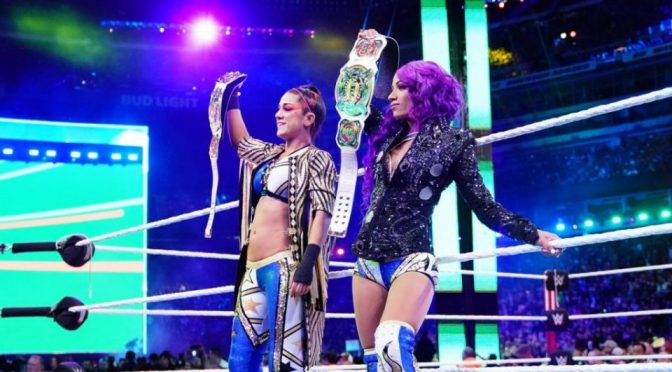 The WWE has issues.  This really isn’t up for debate.  The WWE has talent issues, one needs only to look at the tweets talent are posting to see that.  The WWE has also pissed off and continues to piss off Sasha Banks for years of mis-booking, dating back to her call-up.  So why is anyone surprised she wants out?

These stories of Banks being unhappy aren’t new.  In fact they probably happen every year.  I’m not sure why she’s being given different standards then the Revival, and  others but I can guess.

I do have my critiques of her as a talent, she’s far too reckless for her own good, but in recent years she’s toned that down.  The only other issue I can take with her is that her gimmick is kind of ‘dime-a-dozen’ at this point.

But I have zero issue that she wants to quit, according to new reports.  I think the WWE’s contracts are pathetic and unethical.  Why no one has taken them to court yet is beyond me.  They don’t provide medical coverage, pay into IRA’s, have retirement fund or anything else that other pro-sport leagues (save for the UFC but that’s a different issue).  Yet you’re a full contracted employee in everything but classification.

Banks shouldn’t have to quit; she should look at her deal, declare the company has not met her expectations and void her deal. As an independent contractor you sacrifice security with agency.  Yet in the WWE you don’t have either.

If a talent is unhappy then they should be allowed to go elsewhere if they’re unhappy. The narcissism that the McMahons have about how great they are, and how great their company is has to be the most laughable thing I’ve ever seen.  There are going to be people unhappy within your company, it’s not Shangri La.  It’s not nirvana.  People are going to be unhappy.

The issue falls with the amount of wrestlers the WWE is hoarding.  There isn’t enough time in the day to properly use everyone, and people are going to be upset.  In the WWE’s race to conquer the world, they’re not realizing that there are actual people with needs not being met stuck there.

Banks is just the latest victim of this.  Cody Rhodes, Dean Ambrose, Jack Swagger, Sami Callihan, Gail Kim, and others have all seen the writing on the wall; if you’re not a McMahon favorite you have no shot of making it up the card.  The biggest issue with the WWE system is that the money isn’t better for 85% of the roster than it would be on the indies.  In fact most lower card workers would make twice as much on the indies with less dates and more flexibility.

NXT is even worse, as I’ve talked to several talent who went to NXT and who were offered deals and they’ve told me that NXT deals range from anywhere from a 30% pay cut, all the way to a 75% pay cut.  One former t.v. wrestler who signed with the WWE reportedly took a 55% pay cut to go to NXT for the hope of making millions a year.  Last we chatted, they’ve yet to get back to their IMPACT pay, and that’s on the main roster.

WWE talent also pay their own plane tickets, wardrobe, nutrition, training, medical costs, car rentals, hotel rooms.  You name it, they pay for it out of pocket.  That’s not even counting the huge tax number they have to pay, or their daily expenses at their house.  That’s why a lot of talents still live in apartments; because they’re being gutted by the brand financially.

Everyone looks at The Undertaker, John Cena and others at the top as the standard; they’re not. They’re the exception.  Kofi Kingsotn didn’t get his own bus, he asked CM Punk to ride on his.  Why? Because Punk had more clout and made more money for the company than Kofi did at the time.

The WWE isn’t the place of perfection that many believe it to be. It has far more issues than anyone wants to acknowledge because of fear of reprisal.  Fear of fan backlash.  Fear of being dismissed.  The fandom is toxic.  Wrestlers and the crew have gone on record numerous times about the hell employees go through, and how little regard for their well being there actually is; yet fans dismiss this as them just being “disgruntled”.  If that many people are disgruntled, maybe you should be listening to them.

So no, I’m not surprised Banks wants out.  I’m only surprised she hasn’t left yet.