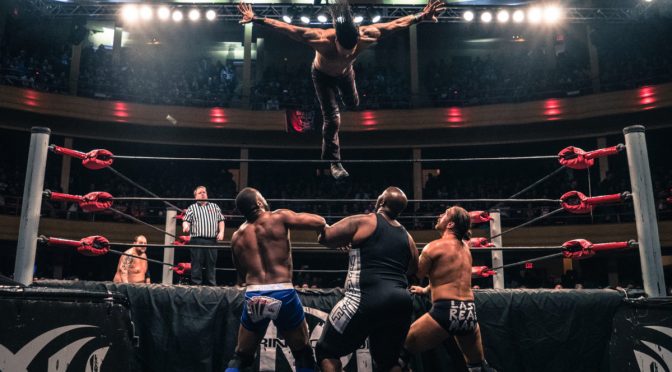 In the hierarchy of  American wrestling, it currently goes #1) The WWE, #2) AEW and #3) IMPACT Wrestling.  Sitting at #4) is ROH Wrestling and it isn’t even close.  There was a time when ROH was battling for the 2nd spot, especially with Cody Rhodes and The Young Bucks on their roster.

Then the Elite crew left to form All Elite Wrestling.

The problem though is more reaching than just that.  It’s bigger than AEW taking ROH talent like Cody, the Bucks, Brandi Rhodes, Christopher Daniels, Frankie Kazarian, Scorpio Sky, Trent Barreta, Chuck Taylor, Adam Page and B.J. Whitmer; all of whom were in ROH this time last year.  No, the problem with ROH is far bigger than just the Elite leaving.

It’s the Undisputed Era leaving, in the span of weeks.  Don’t remember?  Kyle O’Reily and Adam Cole were in a years long feud that built up to Final Battle where O’Reily defeated Cole to win the ROH World Championship.  Three weeks later O’Reily was gone.  Several weeks later, Cole followed.

Now, not every instance involves such hasty departures.  For instance AJ Styles and Samoa Joe both returned to ROH in 2014/2015 but neither guy was expected to stick around long as both had eyes on the WWE.  This was a return tour of sorts. So they were never treated as anything more than a specialty act, brought in to help put over the long term talent.

No, this is far worse.  Keith Lee left ROH after only a matter of months, leaving his tag team partner Shane Taylor in a bit of a bind as they were signed as a tag team. Mike Bennett, Adam Cole, Maria Kanellis and Moose all left ROH around the same time as well.

In fact, if you look at the 2015 Final Battle event from just three years ago, you’ll see that there are over TWENTY names on that night that are no longer in the company.  Twenty.  Huge turnover.   The only names that remain are Dalton Castle and his Boys, Silas Young, Jay Lethal and new ROH World Champion  Matt Taven.

Six names.  This is a bit different than with IMPACT Wrestling, as they’ve had great turnover as well.  Their turnover however came down to uncertainty and changing ownership.  ROH has had the same hierarchy for years.

They lost ten names after this past year’s Final Battle.  Again, another purge.  Losing young, marketable talent is a trend in the promotion.  Right now their three biggest names are Taven, Lethal and Marty Scurll, but Scurll is expected to leave for AEW at some point as well, so that doesn’t help ROH.

There’s been some names that have stuck around.  The Briscoes, Taven, Lethal, Kenny King, Rhett Titus and a few others but for the most part it’s a revolving door.  I do want to point out that they did sign Rush and Bandido recently and fans are happy about that.  Plus they signed indy darling (never thought I’d say that) PCO and Brody King.  So it’s not like they can’t get talent.  Yet, most of their big acquisitions are bad…

There was Bully Ray, who gained weight, couldn’t wrestle anymore and can’t even bump regularly anymore due to head issues.  Then there was the recent acquisition of Enzo and Cass.  Cass is out of shape and has health issues that need to be worried about and Enzo is Enzo and that alone is horrifying.  Then they signed Velvet Sky (Bully Ray’s girlfriend) and Angelina Love and paired them with long-time women’s roster member Mandy Leon.  Sky is retired and Love was never a high-caliber athlete as we’ve become accustomed to seeing from the more modern female stars.

An entire article could be made about Leon on her own merits.  Leon is often criticized for being outright bad.  She has next to no athleticism, and is constantly being given huge pushes. She’s everywhere on broadcast and on any major ROH show, she’s center stage representing the women.   Why? Because she’s dating Delirious (Hunter Johnson) and he books the show.  Since the relationship started top female talent like Veda Scott, Taeler Hendrix and Scarlett Bordeaux have all left the company.  All three were seen has having higher ceilings, being better on the mic and just better workers.

For fun, wanna take a guess who Leon has had rumored beef with?

It’s pretty obvious that Delirious books Leon as he does due to their entangled relationships.  It’s also not surprising this is a thing, as Hendrix has accused Jay Lethal of offering her a similar deal where if she slept with him, she’d get some nice perks.  Is the story true? Who knows, but it’s something others have claimed, so there has to be some validity to it.  A second, yet unidentified female wrestler corroborated Hendrix’s claim through her own experiences.

This whole roster situation gets even murkier when you realize Madison Rayne signed with ROH just last year and in the near 18 months there, had only had 15 matches.  In her return promo for IMPACT Wrestling she equated to being in ROH as worse than hell.  (For context, she referred to where she was as being worse than the Undead Realm, which is an analogy for hell, and where she was happened to have been ROH).

If it wasn’t for New Japan Pro Wrestling’s alignment with ROH, fans wouldn’t be as forgiving I believe.  All one needs to do is look at the G1 Supercard.  It’s no denying that the Elite crew- when they were in ROH and the show was announced – and the NJPW guys were the reason the show sold out.   Not many people were coming for Bully Ray, PCO and Mandy Leon.   In fact the Leon-heel turn to form Allure with Sky and Love and the shocking debuts of Cass and Enzo were throttled online by fans as mistakes.

Hell, the best guy ROH has signed since Cody, Jeff Cobb, only signed because of the NJPW deal.  Cobb wants to work NJPW, and ROH is his avenue to get there.  I’ve heard whispers that Cobb had it put in his contract that he’d be among the ROH representatives whenever the company needed to send talent to NJPW.

NJPW is the only reason people perceive ROH as being on par if not bigger than IMPACT.  Keep in mind both brands film shows in similar sized buildings; if not using the same damn ones.  They both film regularly in the Sam’s Town Casino.   Both pack the building pretty well.

There are rumblings that NJPW is growing tired of ROH.  There is a genuine belief among those in IMPACT Wrestling and All Elite Wrestling that New Japan Pro Wrestling will affiliate themselves with a new promotion when the current deal expires.  It’s part of the reason why IMPACT is timid to work with other Japanese promotions at the moment, despite interest.

Is any of this true?  Who knows, but there does seem to be some interesting noise being made; we’ll keep an eye out on it.

The NJPW/ROH connection has kept fans from being too upset with ROH as a whole in recent years, same with The Elite’s involvement with ROH.  Fans ignore the mass departures, and the lack of wrestler praise for the promotion.  Fans still see it as this indy darling fed, just doing enough to get by; those plucky upstarts!  Yet the truth is far from that, as Sinclair Broadcasting (ROH’s parent company) is a bigger company than the WWE is.

ROH is as far from ‘indy’ as McDonald’s cheeseburgers are from nutritional.  There in lies the problem though; the perception.  The perception is that ROH is an indy fed with a low budget but they’re not.  They choose to make their shows look the way they do.  They choose the talent they want to hire.  They have all the power in the world to make sweeping changes, but refuse.

So when people like Jim Cornette point out what a shit show ROH really is, it gets downplayed.  There’s a reason why wrestlers always leave, and rarely ever praise the place anymore.  The love affair with ROH is NJPW infused and once that secret ingredient runs dry the real ROH will  be seen by all, for all, and I hope the wrestling media finally starts teeing off on ROH for their missteps.

The talent they acquired recently showcase a genuinely disconnect from what works.  If you make changes and bring in two high end luchadores, and a 50 year old vet as part of bigger, more impressive acquisitions; that’s a win.  If those three are the bigger acquisitions?  Not a great look.

The folks at ROH have lost so many top talents it’s not even funny.  All but but a handful of names stay, when ROH is offering their biggest contracts ever.  Yet no one is asking why.