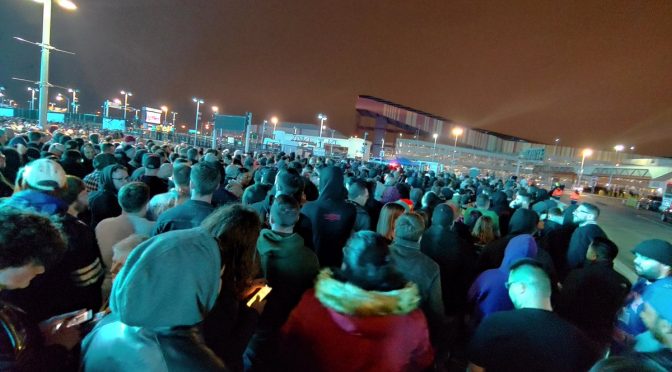 WrestleMania lasted two literal days this year.  It began on Sunday the 7th of April and did not end until Monday, the 8th of April.  Why?  Money.  The WWE isn’t worried about getting all of their wrestlers on the show; as some didn’t.  They’re not worried about giving the fans bang for their buck; the crowd had died long before the 2nd day started.

No, what they care about is lining their pockets with money, even at the expense of fan safety.  Does this mean the WWE is actually putting fans in danger intentionally? No, this is more negligence than anything; but the fact still stands that the WWE’s desire to push more money into their already bloated corpse is the single reason why last night’s post WrestleMania disaster occurred.

Fans described leaving the event as “…hell on Earth in New Jersey”, for those leaving via public transport.  Which is saying something considering how some people usually view New Jersey.

One fan, Justin J. Lopez reported waiting a whopping three hours to just get ON his bus, not even back to where he was staying. It wasn’t just the buses that were problematic, as there were rumors online of only one train going back and forth.  Alex Novelo claimed that the PATHTrain’s were running nonstop until 5:00 a.m. just to get many people back to where they parked.  According to ABC 7, via the AP, New Jersey was planning on running six trains following the event until about 1:00 a.m.  Yet, due to federal requirements, and apparent union issues, the train crew hours were limited.

According to the report, 12,000 waiting fans took trains last night in the span of four hours.  The Governor Phil Murphy said the delays and issues were;

We’re going to learn from this.  I’ll be damned if it happens again.

Though the blame was laid at the feet of the WWE, who the state claimed that they were told the show would be over by 10:30 by the company.  This is a claim the WWE denies according to Sports Illustrated. We’ll get back to this issue in a few, however.

The public transport of buses and trains weren’t the only issues, as private rides also became a problem.  As Arash Markazi reported, Uber’s and taxis’ (Lyfts too? Not sure) were running $100 for a trip,  which are insanely high prices to go 20 minutes east.  That’s if you can even find a ride via the ride-share apps.   Lyft and Uber drivers were offering rides for $200 at points on their own and away from the riding share app; just walking up and down the street like a vendor.

The ride-share horrors don’t stop there as TV Personality Ashlee White took a ride from hell on her way back to where she was staying.  The driver of her car was apparently operating his vehicle erratically, going the wrong way on roads, checking his phone’s map while driving, speeding, and stopping in the middle of the highway.  Fortunately for her, she bailed out of the car after coming across a police cruiser and was taken to a local bus station until a new Uber car could arrive to take her back to where she was staying for the night.

It wasn’t all bad though.   Our very own Andrew Campise told me that those who drove to the event had a much shorter wait, and he said it only took about 20-30 minutes to get out of the venue.  Which was on par for the last time he went to New Jersey for WrestleMania 29.

So why did this happen?  What was the breakdown that lead to all hell breaking lose?   Well the state claims that they were told the show would be done at 10:30, and WWE claims they don’t advertise their end times.  YET, while they may not advertise it, it is required on all leasing deals with state ran facilities to have a hard-out time for shows.  This is due to labor reasons.  (Editors Note: This is an Ohio rule; but shows that the WWE does worry about out-times as well).

In Ohio if a show went past the posted time, the venue would start charging the act and subsequent companies, usually,  time and a half for rental and employee fees.  The price for on site independent contract, local union employees and venue employees are all calculated day s- if not months – prior to the show.  Every required hour that the company expects to need crew for is planned out.  A hard out time is ALWAYS listed on the daily run-sheets for the show and crew.  I’ve worked shows in several different states, not New Jersey or New York, and this was always how it was handled.

I’ve worked well over three thousand concerts in my lifetime as a private security member and on all of those shows I have a run-sheet that listed when the gates opened, and when the show was expected to be over.   Also on the sheet was expected attendance, ticket availability and all other necessary details.  The WWE in the state of Ohio has had these run-sheet’s.  I have several from RAW’s, SmackDown’s and house show somewhere in my office.  On all of them there’s a “down time” or a time when the show is expected to finish and a time when the show is priced to finish.

Usually a show would be over by 11:05 for t.v. and around 10:00 for live events.  We’d be contracted either for another 25-55 minutes depending on the type of event, the volume of the fans, and the venue we were at.  If we were 30 seconds over, we were allowed to leave without issue; as we were no longer being paid.  Our contract had been served.

This doesn’t mean that some shows don’t go slightly over, but the cost of going over is resoundingly high.  The WWE knew how long they planned on going, and I do believe they mislead the state to avoid paying penalties for going over the allocated time, as most states have ‘curfews’ for shows and how long they can go on for.  Due to the size of the show and the amount of money the state will make from the event, it seems unlikely they’ll seek to punish the WWE; as they’re a petty company who’ll just stop running your town to pove a point.  The state knows this.  So don’t expect anything to come from this theory.

So why was the show late? Why was the show on for two days?  Why was the show 7-plus hours?  Simple;  WWE Executives get a 20% bonus based off of the number of minutes WWE content is consumed.  This isn’t a secret either, George Barrios the Co-President of the WWE even revealed that one of the key things the company is trying to do is maximize the amount of time fans watch the Network.

The WWE went long, on purpose, and put their fans at risk all for bonus money.  The sad truth is this isn’t shocking or even surprising.  The WWE would let their fan base die in a horrible blaze if it improved their bottom line by 15%.

The WWE can never again say they care about their fans, because they put 12,000 fans at risk this morning by ignoring the needs of the public.  That’s irresponsible and a typical McMahon move.