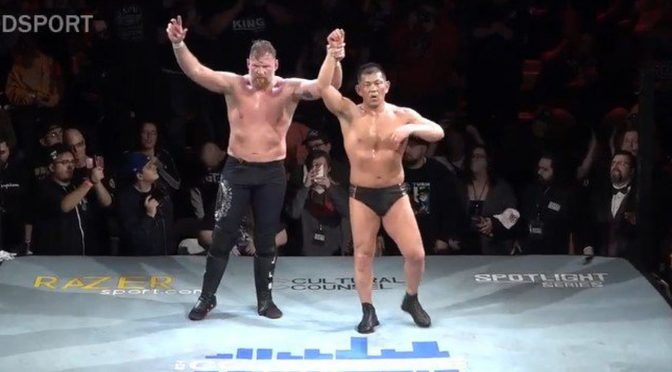 All photo cried goes to Basil Mahmud (on Twitter @Beezzzzy)

Or go to his website to view all of these photos and more at Basilmahmud.com

To say that Bloodsport changed me would be an understatement.  I never though I’d be pining for more of the 41 year old Josh Barnett, but…here I am.

For those that don’t know, I start recording Match of the Year contenders as soon as the previous years list is locked down.  While there’s been some really good matches, for me, the Match of the Year is all about emotion and what it evokes from me. That’s also a long winded way of saying that I had no real MOTY contenders until this weekend.  This involves great matches like the ones Jay White are in.  He’ll probably never be in one of mine, because I don’t think he’s that engaging of a personality.  I don’t believe him.  So his admittedly good class at WrestleKingdom and G1 SuperCard against Hiroshi Tanahashi and Kazuchika Okada won’t make the list; because I ain’t buying it.

I felt the same thing about Josh Barnett for a time. 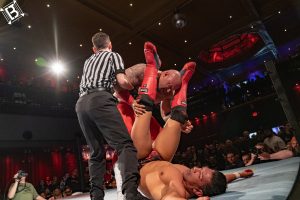 Now, unlike Jay White, I do like Barnett.  I’ve always  loved his commentary, he’s insightful, and he’s one hell of an MMA fighter.  I think Bellator was smart to get him and a potential Barnett vs. Ryan Bader Bellator Heavyweight Championship bout will be money.

The only avenue I didn’t like Barnett in was…as a pro wrestler.  I’ve seen his work in New Japan, and I was impressed towards what he

could do with Yuji Nagata in what was Barnett’s first ever match.  At the Tokyo Dome.  On the iconic January 4th Dome Show.

Yet I never felt like I vibed with his style.  He was a classic All Japan talent in the changing New Japan system.  Gone were the Stan Hansen types and in came the Tanahashi and Shinsuke Nakamura’s.  More athletic, less ‘shoot’ inspired.  His short run in IMPACT in 2017 again made me pause and take notice.  I am admittedly a fan and maybe this time it could be better.  It wasn’t.  Not really.

He had a good match with Lashley but mostly had a forgettable six or seven week stint (at most) and was gone.

Then Bloodsport came around.  Barnett and his opponent Minoru Suzuki stole the weekend in my opinion. They didn’t just have the best match on the card, a twenty-five minute draw, they arguably had the best match of the week.  WrestleMania absolutely included.

The holds, the switches, the selling, the submissions…holy crap this is what I love.  I’m a fan of technical wrestling, and that’s obviously why I fall into the Zack Sabre Jr. , Dean Malenko, Eddie Edwards, Kurt 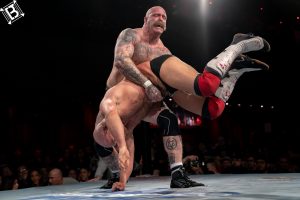 Angle camps.  One of the best matches for me in 2007 was on RAW between Bobby Lashley and Chris Benoit.  It was scientific.  Every little move mattered.  My friend at the time even highlighted how alone I was in my love by pointing out that the fans there live hated it.

But Bloodsport was exactly my jam.  Not only did Barnett prove to me he’s a GREAT wrestler but the show itself was amazing. 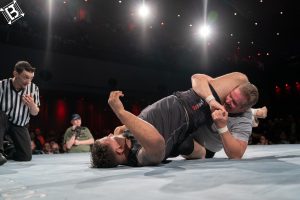 Matches that felt real, with great moments, and sensible booking.  Infused MMA styling without it feeling like it was a worked-MMA match.  It felt organic.  From J.R. Kratos getting a knockout wint with a leaping forearm to a prone Simon Grimm; to an amazing grappling contest between Davey Boy Smith Jr and Killer Kross.  Hell, Jonathan Gresham even lost to deathmatch wrestler 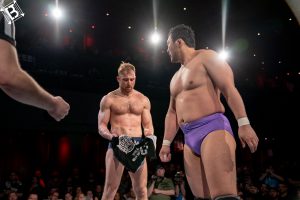 Masashi Takeda in a very believable and honest showcase of what happens when a grappler fights a crazy person.

The only downer was Frank Mir and Dan Severn.  The 60-year-old Severn looked great and moved surprisingly well for his age.  Yet, Mir, who’s only 39, appeared out of shape and unmotivated in what would be a barely 5-minute bout that ended with the same hold that Mir used to beat Brock Lesnar in Lesnar’s UFC debut.  Mir then called out Lesnar for no reason.

The rest of the show was pretty impressive.  Dominic Garrini and former MMA fighter Phil Baroni had a match that actually set up the rules for the whole night as Baroni won, but got himself DQ’ed, resulting in an overturn of the results.  Garrini looked good but opted to go with MMA workout gear and not his gi which I think helps set him apart.   Kratos won by a KO as already mentioned, while Davey Boy Jr. made Kross tap out.  Mashashi Takeda defeated Jonathan Gresham by stoppage, and Chris Dickinson (filling in for Tom Lawlor) defeated Every Time I Die’s Andy Williams by submission.  Mir of course made Severn tap out, and Hideki Suzuki defeated Timothy Thatcher by TKO.  Thatcher’s past history with concussions made for an awkward angle to play up, considering the severity of them.  And of course Barnett and Suzuki drew in the final bout, going the time limit of twenty minutes, plus a five minute overtime.

The show overall was top notch and I encourage anyone who prefers a more grounded style of wrestling to watch because you will not be disappointed.

All photo cried goes to Basil Mahmud (on Twitter @Beezzzzy)

Or go to his website to view all of these photos and more at Basilmahmud.com