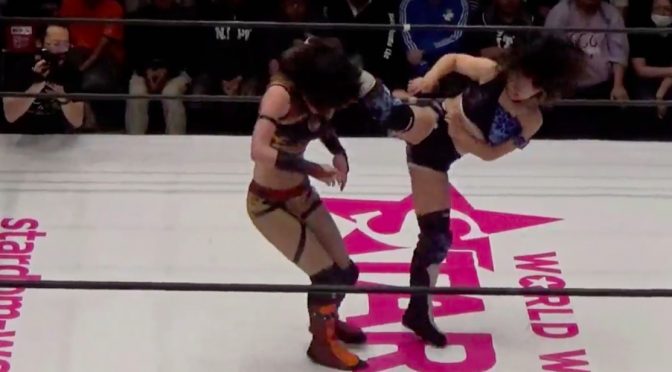 You’re going to see this argument a lot in your pro wrestling fandom.  A lot of men, and in some cases I use that word loosely, will tell you that “it’s not big deal” when one wrestler takes another wrestlers move and uses it.

These people have no idea of the consequences they’re creating with this socialist approach to wrestling.  And let me be clear, some socialist ideas are grand.  Universal healthcare for all.

Yet, being ‘ok’ with stealing moves is bullshit and let’s go through this point by point.

1) Moves are like hit singles for musical acts.  It is their defining anthem.  The thing that give them their originality.  When you start taking another person’s song without permission, you’re stealing.  More than that, you’re trying to pass off someone else’s thing as your own.  In some cases, bands or acts will give permission and support those that reimx or change the song.  Yet, that’s the key thing; the song is usually always different to some degree.  Faster, slower, with instruments, without. One good example is Nine Inch Nails’ original version of Hurt.  It was hollow in it’s essence, as if to portray the song as someone screaming into the void, only to hear back their own misery.  Yet, when Johnny Cash covered it, stripped away Nine Inch Nail’s experimental and industrial rock approach to the tune, and gave it a smooth unplugged vibe, the tone changed.  It went from a song of depression, to a song of regret and loss.  Still sad and melancholy, but each entirely their own song.

2) Dilution and over-saturation is a real issue within the industry right now.  The more people do the same high-risk or flashy moves, the less people are going to care.  Fans become jaded.  Fans have become so jaded that there’s a good and very real argument for why the WWE should of ended the Hell in a Cell gimmick back in 1998 after Mick Foley almost died; twice.  Because you can’t top that.  The more wrestlers steal other moves, the less impact these moves have.  If you are taking someone else’s gimmick move, and using it as your own, all you’re doing is hurting another worker.

There’s a second issue beyond over-saturation, and that’s the dilution of the move.  The lessening of the impact it has.  Case in point Jake ‘The Snake’ Roberts and Jerry ‘if she’s a teen, then I’m peachy-keen’ Lawler.  Roberts used the DDT as a finisher, now it’s no more than a regular move in most people’s arsenal.  A testament to it’s popularity but an indictment against those who used it and abused it.  Then there’s Jerry Lawler and his piledriver.   Another move that used to end matches, and became a common move.  Yet, unlike the DDT, the piledriver was put on the shelf by the WWE and ended up resetting itself.  With the rise in awareness towards concussion, the pilerdive has new life; but that’s this makes it the exception, not the rule.

3) And finally it shows a complete and total lack of respect for those in the industry as a whole.  When Michelle McCool started doing the Styles Clash back in 2009 (or so, I don’t remember the exact date), fans were outraged that she’d have the audacity to not just use the move, but then claim to not know who AJ Styles was. This is disrespectful.  It’s one thing to do something to get yourself over, it’s another thing to take something from someone on a smaller stage and co-op it as your own.

There’s really no good reason to take another person’s move, not without permission.  If someone is actively using it, respect that.  As much of a stain that Randy Orton is, even he knew it was fucked up to not have Diamond Dallas Page’s permission to use the cutter.

The reason I’m bringing up is because the Gate-Keeping-Troll that is Sean Ross Sapp wants you to know that respect doesn’t matter in life or pro wrestling.  There was an incident at one of the recent Stardom shows in Japan, where Joshi legend Manami Toyota posted online about her displeasure of seeing Bea Priestley use her finisher.  Sapp spat on her beliefs by saying the culture of pro wrestling in Japan (that took most of it’s cues from the states mind you) doesn’t matter and to get over the whole thing.

In Japan, and how it was in the states before Sapp and others became entitled brats, respect is everything in pro wrestling.  Respect protects one another in the ring, it protects the industry beyond the top guys best days, it ensures that there will be a tomorrow for everyone.

Manami passed her Japanese Ocean Cyclone Suplex down to two wrestlers, Tsukasa Fujimoto and Ikuto Hidaka.  Tsukasa is currently with Joshi promotion Ice Ribbon, while Ikuto is with Pro Wrestling ZERO.  Neither obviously work for Stardom, the promotion that Bea Priestley works for.

Who is this?
Bea Priestley?

She used ‘Japanese Ocean Cyclone Suplex’ in the match, right?

I have handed over that move to only them.
Tsukasa Fujimoto and Ikuto Hidaka.

Don’t use my special move without permission! https://t.co/C2HD7onBHZ

The problem is that now Priestley is doubling down and mocking a Joshi legend, a woman who paved her way to get into wrestling in Japan by buster her ass to ensure that there’s a market for it in Japan. 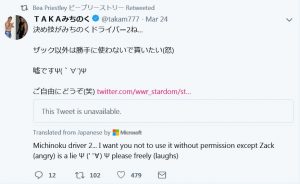 Manami tweeted again putting emphasis on the point, which was respecting those who use now and not showing them disrespect.

The issue with this argument boils down to one tenant; respect.  Respect for your peers, respect for your industry and respect for yourself.  So many of today’s ‘stars’ can’t seem to draw because they’re cheaper, and less impressive versions of legends.  Adam Cole is trying so hard to be Shawn Michaels it’s causing him to lose his hair….So at least they have that in common.

When guys like Sapp say this, he’s saying it as someone who doesn’t truly get it.  He’s forcing his principals on the business, and refuses to see the potential future for what it is.  Jeff Jarrett told me in 2015 that the industry was heading towards a boom period, and he was right.  Here we are in 2019 and I’ve never seen the industry this healthy before.  Yet, to sustain this, you have to make sure you aren’t only capitalizing on the obvious.

Back to music for an instant, a great music  channel on YouTube called The Punk Rock MBA does a series where he breaks down why certain musical acts fizzled out.  The common theme in most of these is down to fans seeing it for the cash grab that it is.  Guys and gals change their looks, change their sound and try to capitalize on what’s popular.  These bands often, if not always, break up and get forgotten by time, while bands that adapt their styles and look for something new to them last the sands of time.

Pro wrestling, move stealing, and the desire to just repeat the same things that got everyone else over is a cash grab.  By doing this they are potentially harming others’ long term profitability,  and possibly killing the style all together for the next generation.  Hardcore matches don’t sell like they did in 2000; because everyone did it and over saturated the market.

People like Sapp need to stay out of this debate.  They’re only looking a foot in front of them, and not worrying about the next 300 miles.  The industry can reach new heights, but we have to respect one another in order to carry the momentum upward.   When you sell out for a cash grab, you hurt the overall fabric of the genre.  When you hurt the genre, then everyone suffers.

Evolution will always happen, no one style will always be in vogue, that’s obvious; but you don’t need to be a trash pile to people as it changes.  Respect is the thing this world is lacking, and that’s the #1 reason why this world is in the place that it is; we don’t lack respect for one another.

But I doubt Sapp and Priestley will ever admit this.  They’re too busy tearing down others to build up their own shrines so people can see how great they are.  This world doesn’t work without respect.  Let’s have some more of it, yeah?