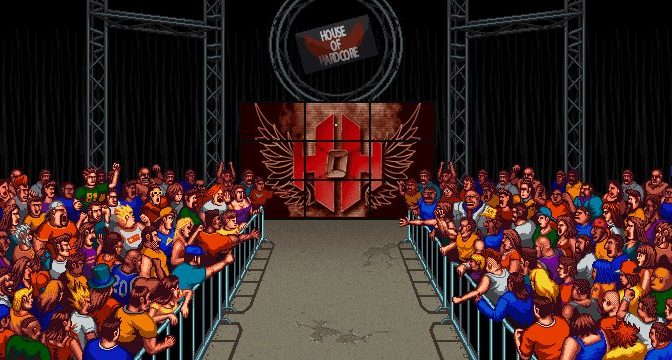 (All images credited to RetroManiaWrestling.com)

THEY BEAT ME BY *THIS MUCH*.  Several weeks ago I had an idea to bring back the classic WWF WrestleMania style video games of old, but with modern wrestlers and the like.  I thought if IMPACT or ROH wanted a unique idea, this would be it.  Update the gameplay mechanics and you’d have a hit. 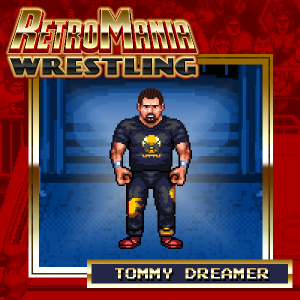 Well, congrats to RetroMania as they’re going full bore with their own twist on the idea.  (*For full disclosure I 100% support this idea*).  The guys at RetroManiaWrestling released news today that House of Hardocre and Tommy Dreamer will be apart of the game.

The developers put out a press release celebrating the announcement, which you can see below;

Collegeville, Pennsylvania — Retrosoft Studios, LLC is very proud to announce that Tommy Dreamer and House of Hardcore are entering the digital arena of RetroMania Wrestling when the game releases early next year. For longtime fans of the 1991 arcade classic WrestleFest?, RetroMania 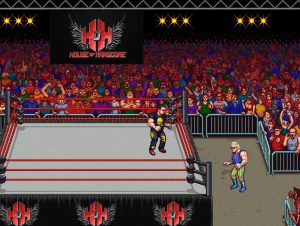 Wrestling is the spiritual successor that they’ve been looking for.

With beautiful 2D sprites, amazing backgrounds, and fast-paced arcade style game play that gamers and wrestling fans of all ages can enjoy, RetroMania Wrestling now welcomes House of Hardcore’s founder Tommy Dreamer as a playable Superstar within the game. In addition, players will be able to battle their opponents in the House of Hardcore arena and compete for the Television Championship.

Dreamer and the House of Hardcore branding brings

an extreme dynamic to the game. The ECW Legend joins Hawk and Animal of the Road Warriors, Austin Idol, and Zack Sabre Jr. as the first announced wrestling Superstars for RetroMania Wrestling.

Since its inception in 2012, House of Hardcore has embodied the spirit of Extreme Championship Wrestling (ECW) and the promotion has run over fifty events to date across eleven states and three countries. 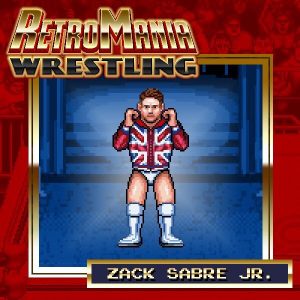 Retrosoft Studios, LLC is ‘extremely’ excited to announce this partnership to ultimately allow fans to experience House of Hardcore in a video game for the very first time.

RetroMania Wrestling is the spiritual successor to the classic arcade game WrestleFest that was released in 1991 by Technos of Japan. It will be a “pick up and play” arcade wrestling game with beautiful 2D sprites, incredible backgrounds and fast-paced arcade style game play. Visit RetrosoftStudios.com for more information on the game and to keep up-to-date with future roster additions and gameplay announcements. 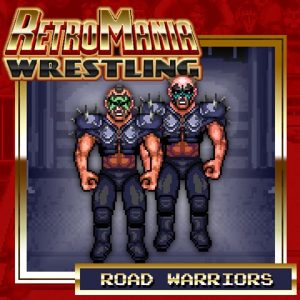 So far there doesn’t appear to be too much else revealed news wise, no match types or how the game engine will work.  We do know however that there will be a cage match though, so there’s something to look forward to.
That being said, the novelty of the game won’t last long if the game engine isn’t improved upon from their predecessors of the early 90’s.  The website says the controls will be “fast-paced arcade style game play”.  But what does that mean?
They also do say that the game is the “spiritual

successor” to the 1991 arcade cabinet game, WrestleFest by Technos of Japan.  I can’t say I remember that game, just the crappy console ports.
They’re not the only developers creating a non-WWE wrestling game, as Chikara as well are putting forth efforts to create a new over-the-top arcade style video game.  The game, Chikara’s Action Arcade Wrestling is in open-beta now at their website.
That being said, only time will tell how the gameplay is, but until then we can at least speculate on who the next additions will be.  I have even money says Nick Aldis will be in the game, but I’d love to hear what you guys think on Twitter at @NerdCorp.