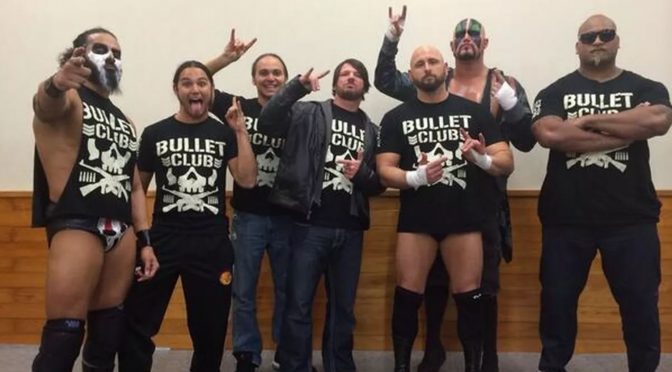 No matter what happens from here on out, The WWE has proven that they can’t market foreign market stars.  PWInsider is reinforcing this theory with the news of Karl Anderson and Luke Gallows being pulled from house shows.  The reason the website cites is over the contractual renewal issues the duo are having with the company.

The duo are expected to leave the promotion, having turned down high-six-figure deals, that would of netted them well over a few million dollars over the life of their deals.  Part of the hold up is faith in their booking.  With New Japan Pro Wrestling flourishing (besides in Texas), IMPACT offering million dollar deals to top talent, and ROH snatching up and pushing new main event players – it makes little sense to stay in a company and let your legacies die a slow and ugly death.

The duo are beyond upset with how they’ve been used, and their deals are up this September. Yet, they’re not the only ones who should be upset with how they’ve been used.  Firstly, let’s look at NOAH-God, KENTA – formerly known as Hideo Itami.  KENTA was one of the most marketable and respected wrestlers in all of Japanese wrestling.  Yet when he arrived in the WWE he was given very little to do, despite the hype that surrounded him.  Injuries derailed some pushes, but let’s be real, if the WWE wanted to push him then injuries wouldn’t of stopped his momentum.  The WWE never wanted to push him, they just wanted to make sure no one else could.  It’s no surprise at all that he turned down a new deal and opted to leave the promotion.

Then we look at Shinsuke Nakamura, who despite coming in with even more big time appeal has had an even worse run when you consider the early heights he achieved.  Nakamura won the Royal Rumble, but then went on to prove he was either A) washed up as he had zero Match of the Year contenders after his initial debut in NXT, or B) the WWE simply didn’t want to believe in his potential and slowly killed his aura.  Nakamura has been in the United States Championship scene, but that feels more like a cementing of his burial and not like a huge achievement.

Then there’s AJ Styles. Yes, Styles had two runs with the WWE Championship, and the 2nd was long.  Yet neither were impressive.  Styles was bogged down with crap quality opponents, bad story telling dynamics forced into the matches and a slew of stupid ideas on top of a slew of stupid ideas.  Styles in his two reigns never had a major match for the belt that felt like an all time classic, and the first chance he gets to have a feud like that with Daniel Bryan, the company hastily ends it and moves Bryan on from Styles.  It’s worse than that though, despite a lackluster United States Championship win, Styles has been horribly misused during Mania’s in the past.  He debuts at the Royal Rumble and we don’t even see his entrance, then he gets eliminated by Kevin Owens of all people.   He then gets put into a lame-ass story line with Chris Jericho that goes nowhere, and sees Styles lose at his first WrestleMania.  Then Styles wrestles against Shane McMahon in the his next Mania match.  Not exactly proper execution for Styles.  Finally, Styles then gets Nakamura; a match that was doomed from the start as fans were hoping for a rematch of their classic at New Japan’s Wrestle Kingdom a few years back.  That did not end up happening.  Now Styles is facing Orton at ‘Mania, again limiting him to having a mediocre match at best on the “Grandest Stage of them All”.

Anderson and Gallow’s departure just highlights a huge issue within the company; an issue that Kenny Omega and Juice Robinson see and want to avoid.  They know they’d be screwed with they went to the WWE.  Anyone who leaves Japan, or hell, even Mexico, is doomed to fail in the WWE.  Men like Andrade Cien Almas and Gran Metalik want out already, and men like KUSHIDA have already failed in the company, they just don’t even know it yet.

If you’re a wrestler in a foreign market, avoid the WWE at all costs. They’ll simply ruin you.

In related news, AJ Styles announced on Twitter today that he has formally signed a new contract with the WWE.  While no information is available, less house show dates are rumored, and a whopping increase in his per-appearance are expected. His yearly take-home won’t be too much more, I’d reckon, but if the rumors of a lighter schedule are true, then he’s got to be happy about that.

Despite my issues with Game Changer Wrestling and their management crew, I have to give props to this.  Josh Barnett is hosting the next Bloodsport event, which used to be hosted by Matt Riddle.  At this year’s Bloodsport, Barnett announced that former UFC Heavyweight Champion Frank Mir would be taking on 60 year old Dan Severn at the event.  For clarification’s sake, Severn has listed ages of 60 and 64, though I can’t find any source that confirms one over the other.  He doesn’t seem 64, so I’m going with 60.

Quick Hits – DJZ is apparently on his way to NXT according to PWInsider.    Mike Johnson of PWInsider is also reporting that Dana Warrior has started on WWE’s creative team full time.  I continue to hear rumblings that IMPACT is looking at other TV deals for their U.S. broadcast, with the hopes of making a move around June.