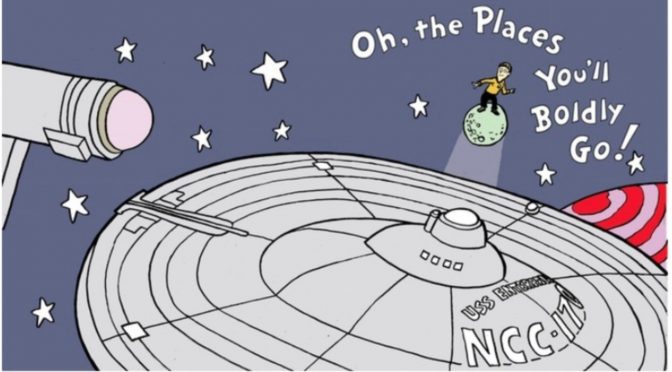 ComicMix is having a good day, having won a lawsuit against Dr. Seuss Enterprises recently . The lawsuit tried to stop a crowd-funded , Seuss-inspired, Star Trek children’s book called Oh, the Places You’ll Boldly Go!; which is of course a play on the iconic Star Trek catchphrase.

The good folks at Dr. Seuss Enterprises sued, citing a breach of copyright law, something a judge ruled against last year, stating that the book was not deliberately misleading.

In a follow-up summary, US District Court Judge Janis Sammartino agreed with the findings, stating that the book does in deed fall into the realm of ‘fair use’, as it’s a parody.  Dr. Seuss Enterprises tried to cite a 2018 decision of Oracle America, INC v Google as a precedent but the argument wasn’t ‘persuasive’.

The judge cited original art work, and writing as the reasons for the decision.  The judge also claimed that the non-Seussian spacecraft used on the cover, a sticking point for the lawsuit, showed enough originality to disqualify any claims of copyright.

In other Trek news, the Deep Space 9 documentary – What We Left Behind: Looking Back at Star Trek: Deep Space Nine – has picked up a distributor according to Deadline.  The film will see a release across multiple outlets this year, including a theatrical release thanks to Shout! Studios.

A cool new anime is coming to Netflix called Gods and Heroes.  The 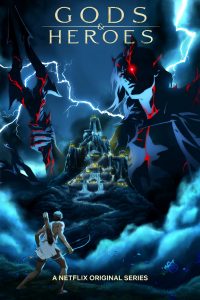 series will focus on Greek Mythology an will be set in ancient Greece.   The synopsis of the series was revealed in a press release;

The series tells the story of a young man who, cast aside by his people, learns that he is the illegitimate son of Zeus. He alone can save both Heaven and Earth but to do so he must survive the vengeful wrath of a goddess who wants him dead and the monstrous forces of evil she aligns against him.

The roster of actors bolts names form Agents of S.H.I.E.L.D., Silicon Valley and Luke Cage, while getting it’s animation from the same studio that has done Netflix’s Castlevania anime.

In publishing news, Wonder Woman is geting a new Tween Adventures series, called Diana, Princess of the Amazons. The book will be created by Shannon Hale, Dean Hale and Victoria Ying and will be published by DCZoom, DC’s tween line of books. 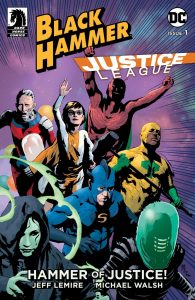 In crossover publishing news, DC and Dark Horse are coming together for a Justice League/Black Hammer event called; Black Hammer/Justice League: Hammer of Justice.  While most crossover events are just ‘meh’, this one is being written by Jeff Lemire and Michael Walsh.

The book promises to not be a start of an ‘event’ like publishing cycle that DC and Marvel routinely put out, and Lemire wants fans to know that Black Hammer isn’t the start of anything that takes the book away from what makes it so unique.   Lemire promises that this crossover will have “an emotional impact” on both sets of charters.

Quick Hits – A better look at Gotham’s batsuit is now circulating online, simply click here to check it out.  The PlayStation Classic continues to bomb, dropping to $36.99 as of March 13th.  Millennium Films has dropped Bryan Singer from the Red Sonja project, with raising concerns of sexual assault allegations being levied against Singer as the cause.  Titans has brought in Esai Morales of Jericho fame to play Deathstroke in season two of the series.