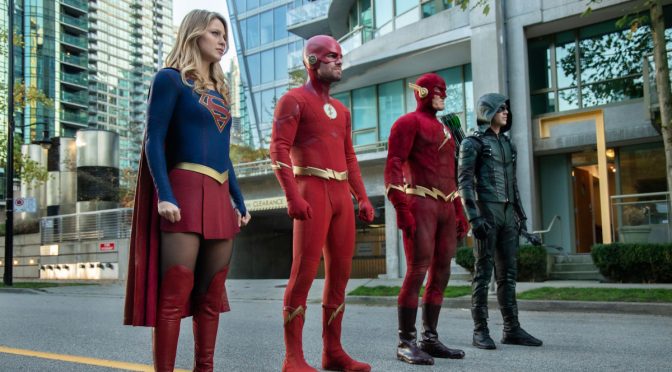 Major changes in The Arrowverse are underway.  Arrow is ending their run, Batwoman is debuting and it looks like The Flash will be under new management.  It’s being reported by Arrowverse Producer Greg Berlanti that co-exec producer of The Flash, Eric Wallace, will be promoted to show runner for next season.  He replaces the current showrunner Todd Helbing.

For those unaware the showrunner is basically the boss of the series.  While in films, it’s the director usually, in a t.v. series the director is often just there to follow the vision of the show runner.  One has to wonder why the change is being made now, as the universe as a whole is gearing up for what many see as the end of an era in the fall when the Arrowverse goes all in with the Crisis on Infinite Earths crossover.

From his first day on The Flash, Todd Helbing has been a leader on the show, beloved by the cast and crew for his exceptional talent, vision and wonderful attitude. We are all sad to see him go, but we will all be better for the many shows he will no doubt create and run in the future.  Wallace has proven his own exceptional talent and voice since season four, and we couldn’t be more thrilled to watch how he shapes the future of Team Flash and the many thrilling adventures that lay ahead for our characters and dedicated fans.

AMC is reviving Orphan Black in a spin-off series according to Variety.  The original Orphan Black aired on BBC America and followed the events surrounding a group of clones; all played by Tatiana Maslany.  Orphan Black producers Temple Street Productions will oversee the spinoff.

A new trailer for the Batman vs. Teenage Mutant Ninja Turtles film has debuted and features Batman, Batgirl and Robin battling the turtle’s as Batman’s greatest threats come together to battle the super-group.

Quick Hits – A new poster for Aladdin reveals that the Geanie wasn’t supposed to be blue after all, and hints at it being a last minute change due to fan backlash.  In related news Alan Tudyk has been cast to play Iago.  One of my first crushes, Tia Carrere is all over a possible Wayne’s World 3, if it were to ever happen.  Greg Berlanti claims the pilot episode of Batwoman will take place before the events of The Elseworlds Crossover.