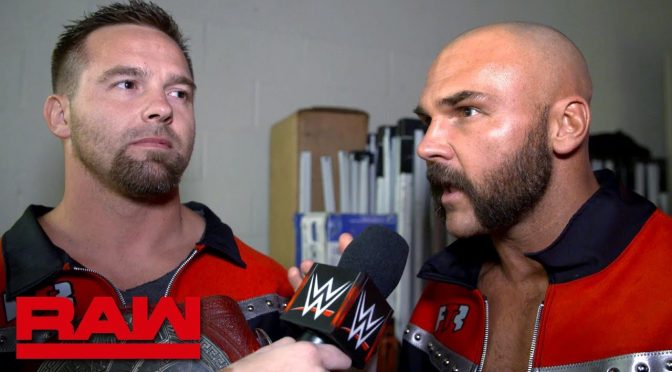 Dash Wilder claims the rumors of his wanting to leave the WWE are “lost in translation”.  Karl Anderson, via his son, wants you to not believe everything you hear.  But, should you ignore the news and innuendos you hear online?  Are journalists like myself nothing more than gossip columnists who blog about sweaty men in between Twitter outbursts?

I mean, I do, but that’s not true about everyone.

The WWE has a history of dictating the story.  Which is actually crisis management 101, control the narrative/ control the story.  If you give wind to the fire, it only rages more.  Jimmy Uso got arrested for being drunk in public, the WWE claimed he was responsible for his own actions.  Multiple allegations of sexual harassment were alleged against Randy Orton, the WWE said they were “conducting an internal review”, then the same night Orton walked out and mocked the accusations.

The WWE just held a press conference in Tampa Bay, Florida to announce the next site of WrestleMania and mandated that interviewers and journalists obey WWE-sanctioned guidelines.   The WWE’s entire roster raw-dogged Dave Meltzer after he had the audacity to make a comment about a female talent  Keep in mind Meltzer was one of the few in the industry media who believed Barry Orton, and others who accused the WWE and Vince McMahon of covering up sexual assault against children back in the early 90’s.  Vince is known for holding grudges unless he can profit off of those same people.

Do you REALLY think the WWE isn’t telling these wrestlers to walk back rumors that Meltzer and other WWE outlets who criticize the company put out there?  Of course they are!

So when Dash Wilder claims that his contract release was request was just “lost in translation”, he’s not saying that.  The WWE is saying that.  Why?  Because the view on the company is changing.  The WWE is no longer the only outfit in town where you can make a healthy living.  The WWE can no longer hold fat contracts over people’s heads, because IMPACT is offering seven figure deals, AEW is offering seven figure deals; and hell, NJPW is the toast of the wrestling world.

The WWE knows they only had one chip, and they don’t have it anymore.  So with public perception turning, and top talent more weary than ever to sign up – unless they get the company to bend over backwards ala WALTER – the WWE has to control the narrative once again.

We KNOW for a fact that Josh Mathews leaks IMPACT news to outlets.  I’ve heard that AEW themselves feed Meltzer news, in order to hype their brand up with anticipation.  Most of the news that comes out either comes from the boys, or someone very close to the boys aka another wrestler.   Is it possible that Wilder himself was leaking these rumors? Yeah, you bet your ass it is.  But was it? Even if I knew, I wouldn’t say.  Mathews is the exception, as he outed himself.

The Good Brothers are not out of the WWE until September.  The WWE might be willing to give them a shot to keep them.  So there is incentive for Anderson, who’s great friends with AJ Styles and Finn Balor, to give the WWE another go.  However, the WWE would need for him to quell those rumors first.

Silencing people is the McMahon way, after all.

IMPACT Wrestling is returning to the 2300 Arena on May 3rd and 4th for IMPACT t.v. tapings.  The promotion has ran there before, but only house shows to the best of my understanding so this will be a big treat for fans.  The 2300 Arena was the former home of ECW.

IMPACT Wrestling Heading to Philadelphia: May 3 and May 4

This coming May, after United We Stand and after Rebellion, IMPACT Wrestling will be traveling to the World Famous 2300 Arena for 2 nights of IMPACT LIVE! This is your first chance to see your favorite Stars and Knockouts of IMPACT Wrestling in the same arena that made ECW a household name over 20 years ago. Tickets will be available Thursday, March 21st at 10AM ET at 2300Arena.Com.

What will happen when IMPACT Wrestling comes to Philadelphia in May? Don’t miss your chance to find out. The 2300 Arena is filled with rich history and promises to make more memories when IMPACT comes to town for the first time ever!

Quick Hits – Lana and Aleister Black exchanged barbs over social media about how was the more enhanced personality.  It was mildly amusing.  It was announced that Alexa Bliss would be the host of WrestleMania 35, fueling speculation that she’s injured again.  Kurt Angle will wrestle his last match at the event as well, with John Cena the odds on favorite to be his last match in the WWE.