(*I fully admit my knowledge on NOAH isn’t as well-versed as I’d like it to be.  That being said I did spend several hours researching and expanding my knowledge on the topic; so I hope I did you guys justice*)

A voyage towards second place in Japan, within three years.  And it all started on Sunday the 10th, Pro Wrestling NOAH launched into a new era in Japan, running an event on G+ called The Great Voyage 2019 in Yokohama.  The event was held at the Yokohama Bunka Gymnasium and brought in nearly 3,000 fans.  Though, it looks like more. 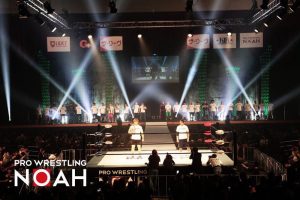 The event saw the standard barer of NOAH, and former IMPACT Wrestling competitor Naomichi Marufuji go up against the man some would claim is the new Ace of the promotion,  GHC Heavyweight Champion Kaito Kiyomiya in a title match.   The 22-year-old Kaito also spent time in the US as well with IMPACT, wrestling on Xplosion against KM, Kongo Kong and Eddie Edwards.

The Christening of Kaito Kiyomiya happened on the 16th of December, just last year, which highlights a nagging issue with NOAH’s  international perception; a lack of top line guys.   The hope is that Kiyomiya can stabilize the top title, and become their new top draw.   The need for him to do so is high, as the promotion was once flushed with the top of Japanese Wrestling talent, like Mitsuharu Misawa, Kenta Kobashi, KENTA (Kenta Kobayashi), Jun Akiyama, Takeshi Morishima, and Bison Smith.

None of those wrestlers remain today, and only Naomichi Marufuji and Go Shiozaki remain of the previous generation.  Though all is not loss.  Former GHC Heavyweight Champion Katsuhiko Nakajima, Masa Kitamiya, Kenoh, and Daisuke Harada represent the current generation and have survived three ownership groups in the span of 3 and half years.   That being said, even the new ownership group LIDET Entertainment admit there’s a talent shortage in the promotion.   And they do intend on addressing that.

It’s also no surprise the changes that the new ownership group did, they did to distance themselves from NOAH founder, the late Misawa.  Some fans are already upset about this, but the group feels they’re being held back by this.  This is why the “Giving Up Misawa” edict has become so prominent in the promotion.  They’re still going to hold the Misawa memorial tournament in June, and they’ll still use the green mat then, but otherwise the goal is to modernize the brand.

There’s been ups and downs, and the company lost some of it’s bigger talent to All Japan Pro Wrestling back in 2013, and even more top talent like

Taiji Ishimori have left to join New Japan Pro Wrestling.  Plus, there was the dark day where KENTA signed with the WWE.  Though many are hopeful he returns to NOAH.

Now that LIDET Entertainment has taken over as owners, the brand seems on a new course.  With an obvious financial investment and a direction towards a new NOAH, changes have been made.  Firstly, the retirement of the iconic green mat.  For years the green mat was a symbol of NOAH, a mat that many men and women would watch wrestlers perform on for years.  A mat that dated back to the iconic Misawa vs. Kenta clashes of the early 2003’s.

Debuting on Sunday night was a brand new sleek white mat, with full logo.  The white mat will be hard to keep clean, obviously, but the new mat ushers in an era of change for the brand and it feels like an authentic step to represent a changing climate in the company. 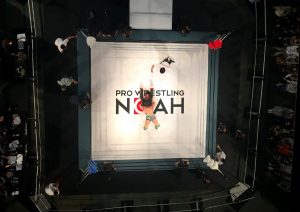 The show wasn’t just highlighted by a class of Then vs. Tomorrow but also saw the return of the first Gaijin Champion of the GHC Heavyweight title, Eddie Edwards.  Edwards teamed up with Masa Kitamiya to take on the GHC Tag Team Champions of GO Shizoaki and Katsuhiko Nakajima.  The duo lost in their bid but it marks a new and hopeful future for not just the promotion but it’s dealings stateside as well.  The return of Edwards may mean a return to the inter-promotional partnership with IMPACT Wrestling; another brand still rebounding after a bad 2010’s.

That green mat means more to me than people will ever understand . I’m sad to see it go but I’m excited to see what the future will bring. No matter the color of the mat, emerald green will always be a part of @noah_ghc #Misawa #AiP https://t.co/vjeZmdACN0

The promotion couldn’t of gotten any luckier with Edwards either.  The modern-day legend of IMPACT and arguably their best pound-for-pound worker is a diehard believer in NOAH and has long ties to the promotion, working there on and off since 2005.  His return to the promotion was marked as a very special night for fans in attendance.  Major NOAH fan and reviewer on Twitter, @HiSame put it best;

Many people at the event yesterday, said how happy they were to see Eddie Edwards.
It meant a lot to them, as being outside the big cities and the metropolitan areas, they don’t often get surprises like this. pic.twitter.com/3xSbMQPFzd

The when and the where of Edwards return to NOAH should show fans that the new ownership group is committed to rebuilding the fan base.  And doing it with top international talent isn’t something to shake a stick at.

It should be noted though that the new NOAH edict is to become exclusionary towards other promotions.  No word if that extends to the states and Mexico, but it looks like NOAH is no longer interested in playing with NJPW or other promotions.

The rest of the show went well, with Minoru Tanaka winning the GHC Junior Heavyweight Championship from Daisuke Harada.  HAYATA and Tadasuke fell short in their bid to win the GHC Junior Heavyweight Tag Team titles from Kotaru Suzuki and Yoshinari Ogawa.  Former WWE wrestler, KAZMA Sakamoto also competed in a lowing effort against Takashi Sugiura.  The whole card sounds intriguing if you’re looking for solid pro wrestling action from Japan , of a promotion not named New Japan.  So give it a look.

This also feels like a last chance for the promotion, as the new ownership group has no intentions of ever selling NOAH.  They claim if they can’t turn the promotion around that they would rather shut NOAH down then see it continue to limp on.  So while Sunday’s event was an era of change for the brand, it’s also one where fans need to understand what’s at stake.  There won’t be another savior coming for NOAH.  It’s either now, or never in it’s revival efforts.

It looks like they’re off to a promising start.

In Other Wrestling News…

Former WCW United States Champion and WWE Intercontinental Champion Lance Storm is working a few shows as producer for IMPACT Wrestling.  Storm, who’s close with President’s Scott D’Amore and Don Callis revealed that he’s going to be at the 22nd and 23rd tapings in Windsor, Ontario in Canada.  He’s quoted as saying;

I’m going to be doing the agent/producer role for Impact Wrestling in the near future. The March 22 and 23 tapings in Windsor, Ontario, which I think are their next TV tapings….it’s only a couple of weeks away now. It is not a permanent position. It is a bit of a test to see if I like the job and if they like my ability to do the job, but, I will be in Windsor for the next Impact Wrestling tapings.

It’s possible [for me] because they only tape two days a month and it’s a Friday and a Sunday, so I would only have to adjust one day, per month, out of my SWA training schedule. So, it’s doable, and obviously I get along extremely well with both Don Callis and Scott D’Amore.

He joins D’Lo Brown and Paul London as agents that the company is looking at using.

Speaking of looking for work, Rene Young’s time on the RAW Commentator desk may be ending according to Rajah.com.  They’re claiming there’s been discussions to take Young off of RAW’s commentary team, which she’s struggled at doing for a while now.  They do stress it’s unconfirmed but with her husband wrapping up his WWE run, it’s very possible she may not be safe anymore.  Young, by the by, should never of been added to the commentary desk in the first place.  Not in the role she was given, anyway.  Young was a host, never a wrestler.  Throwing her into the color commentator seat, opposite Corey Graves, was something that was doomed to fail.  She should’ve been given SmackDown’s play-by-play if anything, but was horribly miscast from the jump.

The second round is set for the New Japan Cup, featuring;

This opens up some questions.  Like can stable mates Taguchi and Tanahashi co-exist post-match?  Will Taguchi get an upset win?  How far can Cabana get?  Will Chase Owens nad Mikey Nicholls usher in a new era for NJPW?  This is exciting.

Quick Hits – Congratulations to Stevie Ray and his brother Booker T, the already Hall of Fame member, for getting inducted together as Harlem Heat in the WWE Hall of Fame.  Brie Bella announced on Total Bella’s she was retiring from the WWE, and no one knew, because we already assumed she did.  #JusticeForLivMorgan .  Bad news for David Finlay Jr, as he’s out six months with a torn labrum.