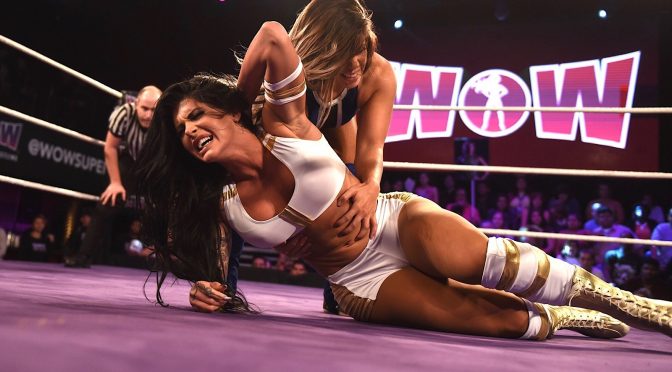 Women of Wrestling, AXS and company held a press conference today to reveal intriguing news about the future of Women of Wrestling.  Firstly, AXS has picked it up for a second season, citing strong ratings for the network.  Secondly, and even bigger news, was the announcement of a WOW women’s training facility that will be opening up with the specific goal of training future female wrestlers; assuming they have ‘pzazz’.

A full press release was released following the stream;

AXS TV announced today, in a live global streaming press conference, that the Network has renewed the hit original series WOW-Women Of Wrestlingfrom Los Angeles Lakers Owner Jeanie Buss and David McLane, founder of the original GLOW “Gorgeous Ladies Of Wrestling” for a second season. The Network upped its order to 24 additional episodes from the initial eight in the first season, following the unprecedented response from viewers who were captivated by the strong female characters, impressive displays of power and athleticism, and the signature stories and colorful profile segments that have come to define the promotion throughout the years. The can’t-miss season finale airs Friday March 8, at 9 p.m. ET/6 p.m. PT in a defining episode that chronicles the journey of the Superheroes and includes the first tag team match of the season, Stephy Slays demonstrating perseverance, and a title match between Champion Tessa Blanchard and the Monster of Madness Jessicka Havok.

“WOW is proud to partner with AXS TV to bring this incredible promotion to viewers across the country,” Buss said. “It is an honor to be able to continue this organization’s long tradition of showcasing the absolute best in all-female wrestling. The women of WOW appeal to a wide and diverse audience because of their strength, competitive spirit, and impressive athleticism, and the tremendous viewer response we’ve received is proof of that. This season was just the beginning, and we are all excited to build on our initial success with the delivery of new episodes airing in fall.”

Since its AXS TV debut on January 18, 2019, the series has garnered impressive gains in viewership, smashing records en route to establishing itself as one of the highest-performing original series among live viewers in the Network’s 18-year history.

“We listened to the fans as to what they wanted to see in women’s wrestling and are extremely pleased with the overwhelming response we’ve received from the viewers, it has been truly incredible,” McLane said. “Our Superheroes are authentic and real, and that comes across in each episode. People are captivated by their unique personalities, and they truly get invested in their stories –we are so happy they love tuning in to cheer on their favorite wrestlers. We look forward to providing our viewers with even more insights into the back stories of these amazing athletes and their epic battles with WOW’s future episodes on AXS TV.”

“WOW is the perfect complement to the AXS TV Fights lineup,” said Andrew Simon, AXS TV Fights CEO. “Whereas New Japan Pro Wrestling tends to focus on male competitors, WOW offers a totally unique platform that allows these strong female wrestlers to shine, putting the spotlight on their skills as both athletes and entertainers. It has become a very popular part of our Friday night lineup, and we are proud to be able to serve as the long-term home for this groundbreaking promotion.”

WOW is the only weekly women’s wrestling series on television, and has amassed a dedicated fan base on the strength of the unique personalities and true inspiring stories of the captivating warriors that go toe-to-toe in the promotion’s signature purple ring. The series puts the spotlight on WOW’s powerhouse roster, featuring over 30 wrestlers including pro wrestling royalty—and current WOW Champion—Tessa Blanchard and Santana Garrett, as well as fan-favorites such as The Beast, Jungle Grrrl, The All-Natural Khloe Hurtz, Fire, Stephy Slays, The Governor’s Daughter Abilene Maverick, Samantha Smart, Princess Aussie, and more. In its inaugural season on AXS TV, WOWintroduced a fresh crop of emerging new Superheroes to the pro wrestling scene, and treated viewers to an intense rivalry between pro-wrestling legacies, as “Born Legend” Tessa Blanchard challenged—and ultimately defeated—long-time WOW titleholder Santana Garrett for the coveted championship belt.

Live tapings in association with the new season will be held May 15 and 16 in Los Angeles at the Belasco Theater (1050 South Hill Street). The tapings will begin at 6:30 p.m. PT each night and tickets are available for purchase byclicking here.

In additional WOW news, McLane is excited to announce that the WOW Training Center in Long Beach will be the first all-Women’s Wrestling school in the United States. The trainers of the historic school will be Tessa Blanchard and Selina Majors. The training center provides women seeking to become professional wrestlers with a place to train in a safe and secure environment.

“I am happy to join Selina Majors in providing women with a fully comprehensive training program designed specifically for them,” Blanchard said. “I was trained by men, and while that worked for me, I know a more supportive community for women wanting to join our profession will increase the participation.”

The press conference did feature Los Angeles Laker Owner Jeanie Buss, as well as David McLane (founder of the original GLOW); and the grouping announced 24 new episodes for a second season.  The first season ends on March the 8th, and the 2nd season begins tapings on May 15th and 16th in LA at the Belasco Theater.

Fenix and his brother Pentagon are everywhere these days, except for the WWE.  There’s an obvious reason for that, WWE doesn’t play well with others, but Fenix has described it best by saying the WWE contracts are “nuts”.   Talking to Nick Hausman of WrestlingINC, Fenix said;

Quick Hits – Ethan Page is the next member of the IMPACT Wrestling roster to re-up, signing a two year contract extension.   Nia Jax revealed that breaking Becky Lynch‘s face with a terribly thrown punch was an “opportunity”.  Undefeated UFC fighter Ben Askren numerously mused that UFC President Dana White is ‘repulsed’ by him.  WWE is rumored to be announcing Tampa Bay as the next location to hold WrestleMania.  Lame.