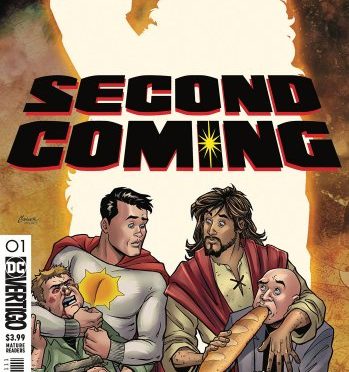 DC has cancelled Vertigo imprint Second Coming by Mark Russell before it could debut.   The cancellation comes amid expected and obvious backlash from Republican, religious and Christians alike.  The series, which I believed wasn’t going to see the light of day, would of seen Jesus Christ partnering up with a Superman type character, trying to learn and grow to be a better Messiah from the wannabe-Man of Steel.

Detractors of the decision cite the obvious ‘free speech’ argument as to why DC should of kept the series going forward, while supporters of the decision rightfully point out that DC doesn’t mock or belittle other religious groups; so why theirs?

In a true form of grace, Russell spoke on the matters and was very grateful for DC for the opportunity and even said he intended on finding a new publisher for the book, tweeting;

DC/Vertigo’s cancellation of the orders for Second Coming, just so you know, DC did not do anything untoward to me.  I asked for the rights back and they gracefully agreed. They’ve been a pleasure to work with and it will still be released, albeit with a different publisher.

Russell will continue to stay on with DC, for now, as he’s the lead writer for the new Wonder Twins comic, from DC’s teen Wonder Comics imprint.

It should be noted that Russell has a history of writing satirical Christian comics, God is Disappointed In You and Apocrypha Now, neither of which were for DC however.

Personally, I’d be more for these types of books if more writers and artists were also bringing in other religions into the conversation as well, but I do have to wonder why Christianity is the only religion that this keeps happening too.  I don’t foresee DC publishing a monthly series called “What’s Up With Mohammad?“, which would be some satirical look at a teenage prophet Mohammad going through puberty.  So why is this ok?  That’s my issue; consistency.

Either it’s all up for grabs, or none of it is.  Don’t pick and choose what is and isn’t mock-worthy.

This new era sure is winning fans.

Quick Hits – Ridley Scott is involved with two new Alien series that are currently in development.   Final Fantasy VII and IX will be heading over to the Nintendo Switch.  Variety is reporting that a Star Trek animated series could be heading to Nickelodeon if it’s picked up.  Aaron Paul has been confirmed for Breaking Bad film sequel.