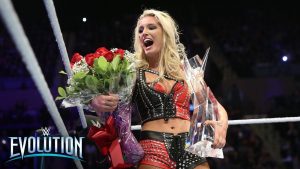 To being today’s news post, we have to first acknowledge the passing of ‘Mean’ Gene Okerlund.  The iconic interviewer and host passed away at 76 unexpectedly.  Our thoughts and well wishes go out to his family.

In more depressing WWE-related news, it appears as though a new scandal is causing some residual effects.  Toni Storm, WWE NXTUK talent, and current women’s champion of said brand,  has been caught up in a nude-video leak that started circulating three or four days ago.  While the video in question is not news, the after affects are.  Storm has distanced herself from social media and deleted seemingly all of her social media profiles including her Twitter and Instagram.  No word yet on who released the video and why; though hopefully we can start being more proactive.  Bad people will always do bad things.  Teaching them not to do something is a pathetically naive approach to the reality of the world.  Be smart about what you say  and do online, and stop sending videos and photos to people.  In today’s internet age it’s becoming increasingly easy to be a target, so don’t help predators make it easier.

We hope Toni Storm emotionally rebounds from this.

In Ring of Honor and NWA news, ROH has agreed to partner with the NWA for the return of The Crockett Cup.  The event will be held on April 27th, 2019 in Cabaarrus Arena in Concord, North Carolina.  The event will be made up of NWA and ROH selected tag teams.  In a snippet from a ROH produced Press Release, the qualifying matches will being this weekend;

The first qualifying match for The Crockett Cup takes place this coming Saturday at the NWA Pop Up Event in Clarksville, TN.  Ring of Honor will also present “Honor Reigns Supreme” in Concord, NC on Sunday, January 13th with a full night of action including Jay Lethal defending the ROH World Championship against former Champion Dalton Castle in an event to be streamed live for HonorClub.

In Major League Wrestling news, the promotion continues to acquire and scoop up new talent and give full contracts to guys.  The newest guy to re-sign with MLW under a new deal is Davey Boy Smith Jr.  Smith is in a stable in MLW right now with cousin Teddy Hart and family friend Brian Pillman Jr.  Smith, Pillman and Hart are all under exclusive deals with MLW.  While they’ll be able to work select dates locally outside of the brand, all three have the right to work anywhere else they want outside of the states as Hart is a big player in AAA and Smith is in a major NJPW tag team with Lance Archer.
In other MLW news, their world champion Low Ki talked to Chris Van Vliet recently about his career.  One thing that jumped out was that Low Ki was in line to win the IMPACT World Championship during his last stint in 2017.  The decision was apparently changed to accommodate Alberto El Patron instead.   When asked if he bothers him that he never won the title, he’s quoted as saying;

No, it doesn’t bother me because I’ve seen the quality of the champions that they’ve had. My time was coming last year and when the issue with Del Rio came up and they dissolved my opportunity to me that showed me that they had no invested interest in me to begin with. So not to have that World Championship is not anything off of my back, my career is way greater than one belt.

In the same interview, which you can see below, he also takes aim at the WWE calling them toxic and inferring they’re a boring product.
In some indy news, Bullet Club’s Block Party will see some names there. The official bullet Club Block Party Twitter Account confirmed that all members of the current Bullet Club will be at the event set for WrestleMania Weekend.  However joining them will be former IMPACT Wrestling X-Division and World Tag Team wrestler DJZ.  He’ll join Jay White, Tama Tonga, Tonga Loa, WWE and WCW legend Haku, and the rest of the Bullet Club.  The tickets are $40 for General Admission and $150 for VIP.  The event is scheduled for April 7th, at Jimmy’s Famous Seafood.  For more information follow them on Twitter.
In a minor correction, despite Defiant and even Joe Hendry himself saying so, it appears as though Hendry will not be stepping away from wrestling, for the moment.
Someone who might be though is Austin Aries.  After a busy 2018, Aries announced on Twitter that he’ll have two more and seemingly final matches in the United States’ mainland this year as he’s taking on Jimmy Jacobs  on Friday at Milwaukee Meltdown for Zelo Pro Wrestling, and on Saturday against Eddie Edwards for Warrior Wrestling in Chicago Heights, Illinois.