Zach Snyder Reveals Clues to Film Universe – Zach Snyder is revealing hints, tips, tricks and outright results to questions surrounding his movie franchise.  In Dawn of Justice, when dirt started to rise off of the casket, Snyder claims that there was far more to that, something we didn’t get to see in the sequel, Justice League, due to Snyder being taken off the film, and the death of his daughter.

Personally, I think it was a boom tube opening up above the casket, pulling in the body of Superman.

This was not the only theory that had boom tubes brought up, as Snyder himself said the ending of his Justice League was way different than Joss Whedon’s, who many blame for tanking the film.  The original ending of the film saw the Justice League’s Superman, Batman, Flash, Wonder Woman, Cyborg, and Aquaman starring down something.  This “something” according to Snyder was supposed to be a boom tube.  We’ve also heard that Darkseid was supposed to be in the film in the flashback, attacking the Amazons, but he was cut.  So it stands to reason that the end of Justice League would of seen Darkseid emerge from said boom tube to confront the heroes.

New Star Trek Series Coming? – CBS All Access has ordered an animated Star Trek series that will focus around comedy according to reports.  CBS confirmed the arrival of an animated series but did not specify what genre it would be, but apparently Rick and Morty‘s  writer Mike McMahan is working on the project.  The title is apparently Star Trek: Lower Decks.

Theft on Star Wars Set – Jon Favreau’s show, The Mandalorian, has already been hit with a big scandal.  Apparently police are investigating theft of the set’s camera department, which among other things, is now missing a memory card with footage of the show on it.  The Blast reports the items were stolen from Manhattan Beach, which is where production is occurring, and it was believed to be an overnight burglary. 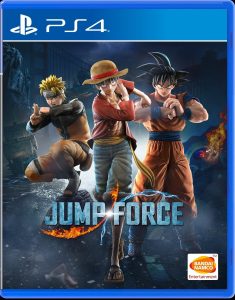 Frede Alvarez has revealed a script for the sequel to Labyrinth has been completed.  Matthew Libatique, the cinematographer on Venom, revealed he’s preparing to work on Birds of Prey, but states that the film will probably have a different name.  Godzilla vs. Kong has cast Alexander Skarsgad of True Blood fame.  Team Sonic Racing has been delayed until May 21st, 2019 according to their official Twitter page.  According to @YonkouProd on Twitter, the image to the left is the apparent retail cover for the anime crossover fighting game Jump Force; which will feature Naruto, Dragon Ball, One Piece and other martial art anime properties coming together for the first time ever.