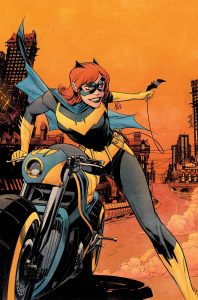 Batgirl Show Coming? – DC Universe has already launched or is planning to launch a Titans, Doom Patrol, Stargirl and a Swamp Thing series.  Fandom Wire is claiming that there are talks for a 13 episode live action version of Batgirl.   The series is rumored to be filmed starting in 2020.  There were rumors of a big screen adaption but those ideas seem to be dead.

Supergirl Main Villain? – DC is trying to launch new film franchises and one would star Supergirl.  Don’t worry about the show, it’s more than likely that it never gets made.  However, the current plan according to industry insider @DanielRPK (via Twitter) is to feature her facing off with Bainiac.  Will the film happen anytime soon?  Who’d even star as her?  How would Melissa Benoist feel about it?  Too many questions to hop in on for now.

Why Did they Kill Kirk in Star Trek: Generations? – At the IC Collectors Convention in Nashville this past weekend, William Shatner opened up about the death of Captain Kirk being a financial decision for the studio, saying;

Well, I didn’t think I had any choice in the matter.  Paramount had decided that the ceiling that they could reach in our box office had been reached and they thought that by putting in The Next Generation cast, that they would reach a higher box office. That decision had been made. It was either I was going to appear and die, or they were going to say he died. So, I chose the more practical of the two. That was their theory. It didn’t work out that way, but that is the way it was.

Quick Hits – Nintendo has announced that Fortnite can be played without a Nintendo Switch membership; meaning there’s no need to sign up for their network to play.  Still need an internet connection though.  Speaking of which, the U.K. resource website Divorce Online has cited over 200 cases of divorce that site the came as the primary reason.    A fan theory states that a throwaway line in Captain America: Civil War actually alludes to Captain Marvel’s debut.  (The line is “Oh, you mean like those UFOs over Phoenix?“)   The line seems to suggest a Kree-Skrull battle on Earth.